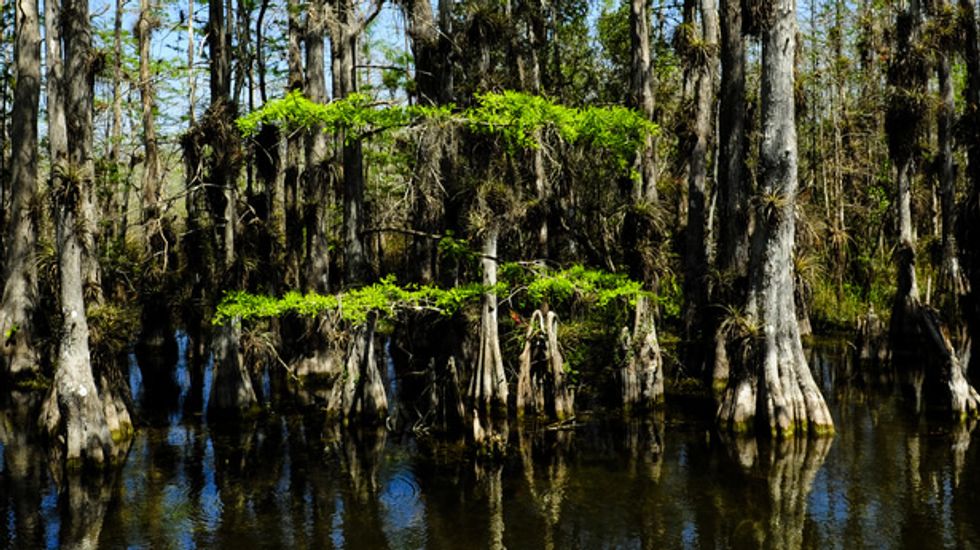 The Everglades are a vast network of subtropical freshwater wetland and estuarine ecosystems that once spanned the length and breadth of south Florida. Fifty years of dredging and diking, starting in 1948, greatly reduced their extent, altering water flow patterns and causing widespread ecological damage.

For the past 20 years, scientists and engineers have been working on a multi-billion-dollar restoration effort designed to reclaim the Everglades’ past glory. I am a hydrologist and have worked for 25 years in south Florida. Currently I co-lead a team at the University of Maryland Center for Environmental Sciences that worked with federal and state agencies to compile a report card on the ecological health of the Everglades.

The report card revealed that not enough has been done yet to reverse the ecological damage from years of misdirected water management. Although some progress has been made toward restoration’s original goals, growing evidence of unanticipated effects from climate change and sea level rise is forcing experts to reassess what is possible.

Both scientific and political hurdles make ‘rehydrating’ the Everglades one of the most complex ecological restoration projects ever attempted.

Rescuing the ‘river of grass’

Advocates have been working to protect the Everglades nearly as long as developers have been dismantling it. In 1947, author and activist Marjory Stoneman Douglas published her classic book “The Everglades: River of Grass,” which warned that “The Everglades were dying,” and their loss would doom the entire region. Presciently, Douglas observed that the Everglades recharge the aquifer that supplies water to Miami and other coastal communities, making south Florida’s booming economy possible.

Douglas’ assessment spurred action to preserve this unique ecological resource, although it took decades to organize and fund a restoration effort on the scale that was needed. In the year 2000 federal and state agencies launched the Comprehensive Everglades Restoration Plan, which is designed to restore the characteristics of the water cycle in south Florida that were critical to sustaining the historical Everglades. At the same time, water managers also must maintain water supplies and flood protection for farms and communities that have been built in and around the Everglades, with more people arriving every year.

After nearly two decades of work, the health of the Everglades is only fair, and progress still lies in the future. That’s the conclusion of the Everglades Report Card, which was released in April 2019 after assessing a huge quantity of data collected from 2012 through 2017. Overall, it finds that “the ecosystems of the Everglades are struggling

to support the plants and animals that live there and the natural services they provide to people.”

Sea level rise is increasingly a factor. About 10 years ago, scientists began seeing unsettling changes in the freshwater wetlands of Everglades National Park at Florida’s southwest tip. Holes were appearing in expansive sawgrass prairies near the coast, filled with dead vegetation and standing water. Experiments confirm that the cause is saltwater infiltrating the freshwater wetlands.

Sawgrass grows on top of a thick deposit of peat. Too much saltwater can kill the plants and eat away at the peat, causing the soil surface to collapse. As seawater infiltrates vast areas of sawgrass, formerly healthy sawgrass prairie is beginning to unravel like a moth-eaten wool sweater. 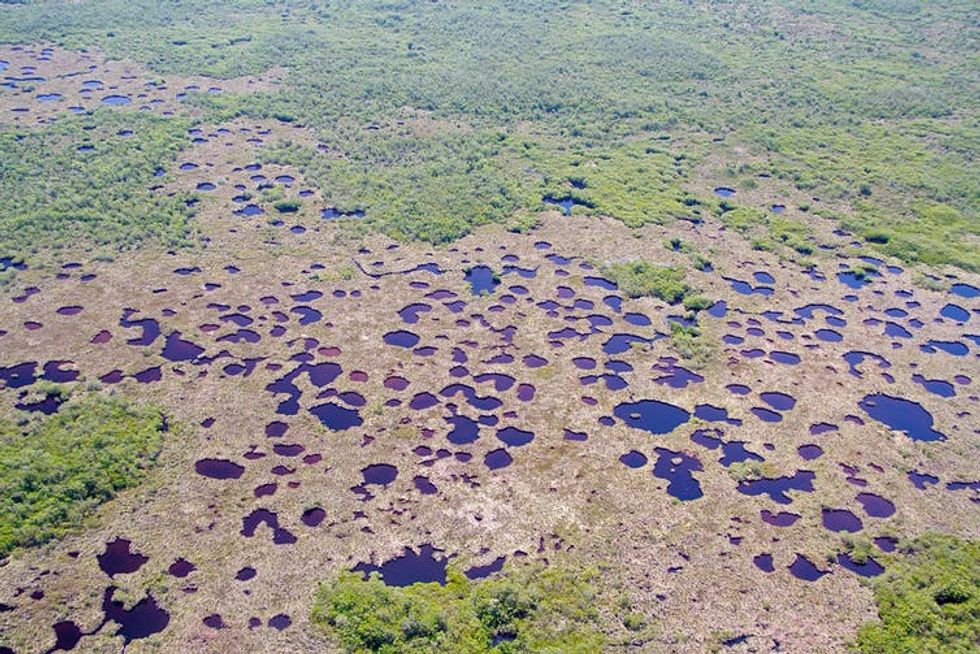 Open-water ‘pothole’ ponds in a sawgrass marsh, Everglades National Park, are thought to have been formed through collapsing peat driven by saltwater intrusion.

The Everglades have natural defenses against sea level rise. Dense mangrove forests along Florida’s southwest coast form a protective barrier that absorbs storm surge from hurricanes. Mangroves filter out and consolidate mud and sand churned up by hurricanes from the sea bottom, building up the coast’s elevation in pace with sea level rise.

Freshwater draining from the interior piles up behind the mangroves, creating a hydraulic barrier that prevents seawater from infiltrating inland. And freshwater wetlands keep up with sea level rise through the accumulation of undecomposed plant material and marl, a mineral-rich mud produced by algae.

But geological records show that there are limits to how much sea level rise the Everglades can accommodate. The Everglades have existed only for about the last 4,000 years. Over this time seas were near their present level and rising at a relatively leisurely pace of 0.04 inches (1 millimeter) per year or less.

Much earlier, around 10,000 years ago, sea level was about 150 feet lower and rising more quickly as ice sheets covering much of the Northern Hemisphere melted. The sedimentary record shows that extensive areas of coastal wetlands and mangrove forests did not form until around 7,000 years ago, when sea level rise slowed below a threshold of about 0.4 inches (10 millimeters) per year.

Since the year 2000, sea levels around south Florida have been rising by about 0.33 inches (7.6 millimeters) yearly – close to the threshold beyond which coastal wetlands are not found in sedimentary records. And this rate is expected to increase as the climate continues to warm. This is why geologists were among the first to raise the alarm about potential impacts of sea level rise, and tend to be pessimistic about the future of the Everglades and south Florida. 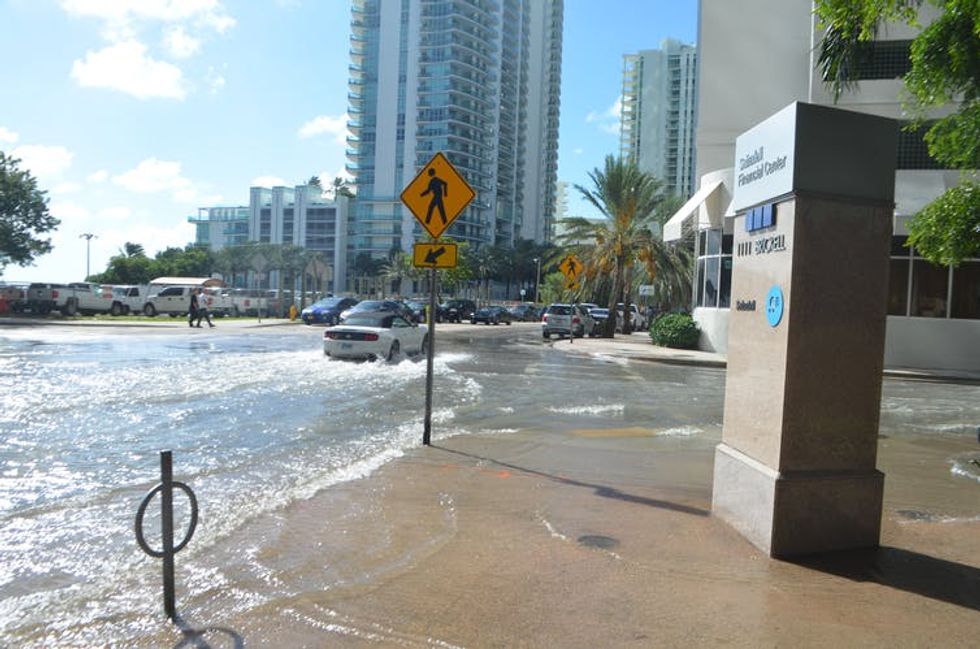 In an October 2018 report, a special committee of the National Academies of Sciences, Engineering, and Medicine urged agencies directing the Everglades restoration to reevaluate whether the project’s original goals were still achievable, given trends in climate change and sea level rise.

Ecologists studying direct impacts of sea level rise on the Everglades are more optimistic. One restoration objective is increasing the amount of freshwater discharge into the southern estuaries by installing bridges along the Tamiami Highway, which has blocked water flow to the Everglades for decades. Restoring flow and raising water levels in freshwater wetlands near the coast will improve ecological conditions in the estuaries and reduce seawater infiltration, making freshwater wetlands less vulnerable to peat collapse.

No one believes it will be possible to completely counter the effects of sea level rise. But Everglades restoration projects like this can moderate them, and perhaps allow the ecosystem to transition more gradually.

However, the plans that guide restoration efforts have not changed since they were first made 20 years ago, and do not take into account changes in temperature, rainfall and evaporation that are occurring with climate change.

Originally, it was anticipated that sea level would rise by up to 6 inches (152 millimeters) by 2050, which is equivalent to 0.12 inches per year (3 mm/yr). Now, however, seas are rising at three times this rate, and are expected to accelerate further due to melting of glaciers in Greenland and Antarctica. New guidelines recently adopted by the Army Corps of Engineers would require planning for up to 26 inches (660 millimeters) of sea level rise in the Everglades by 2050.

In my view, it is time to set aside the goal of restoring the historical Everglades wilderness that Marjory Stoneman Douglas described. The Everglades today are a hybrid ecosystem that encompasses both natural and constructed landscapes. Areas of wilderness will remain, but climate change and sea level rise make it impossible for the Everglades and the rest of south Florida to return to the past.

The state Bureau of Elections has recommended that five of the 10 Republican candidates hoping to oust Democratic Gov. Gretchen Whitmer should be kicked off the ballot prior to the Aug. 2 primary due to tens of thousands of forged signatures.