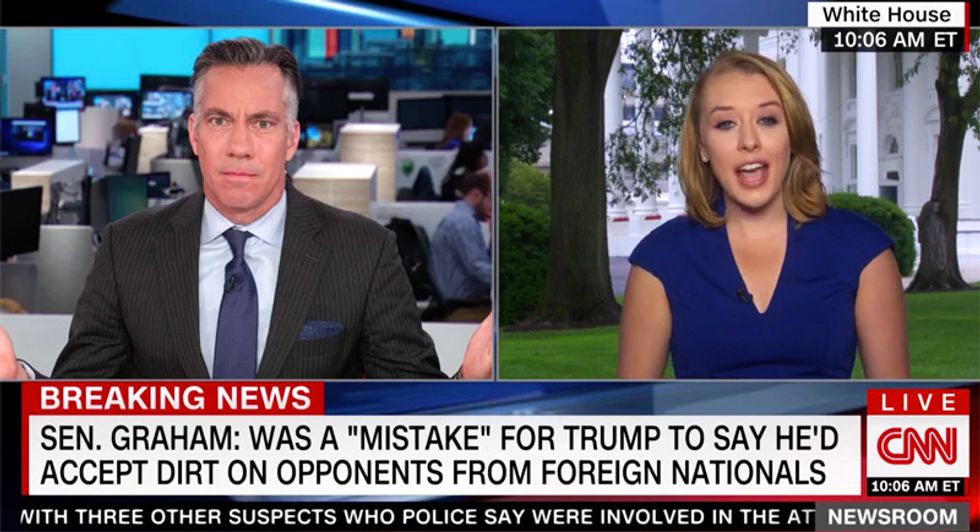 CNN host Jim Sciutto threw up his hands in what appeared to be exasperation on Thursday morning after a colleague informed him that Donald Trump was hinting that a disastrous interview he did with ABC was edited to make him look bad.

Following a Senate hallway interview with Sen. Lindsey Graham -- who tried to pin the president's comments on Democrats -- CNN's Sarah Westwood noted the president's response too.

"He [Trump] said, should I call the FBI after every conversation with a foreign national. Obviously, there's a huge distinction there, and the president suggested that ABC news somehow edited his answer deceptively," Westwood explained as Sciutto threw his hands up with a look of incredulity on his face.

"But you saw for yourself what the president said just there," she continued referring to the ABC clip. "He has downplayed Russian interference in the 2016 election in the past obviously, but the president here, Jim, is confirming his opponents' fears that in the future he might be open to accepting opposition research by just saying it outright in that interview."

"He's also made up the editing comment before," the CNN host recalled. "You remember after the famous Helsinki moments -- standing next to the Russian president -- he said that the transcript got his comments wrong when it was very clear what the president said there."

"Call it up, you can see the video," Sciutto advised the CNN audience.