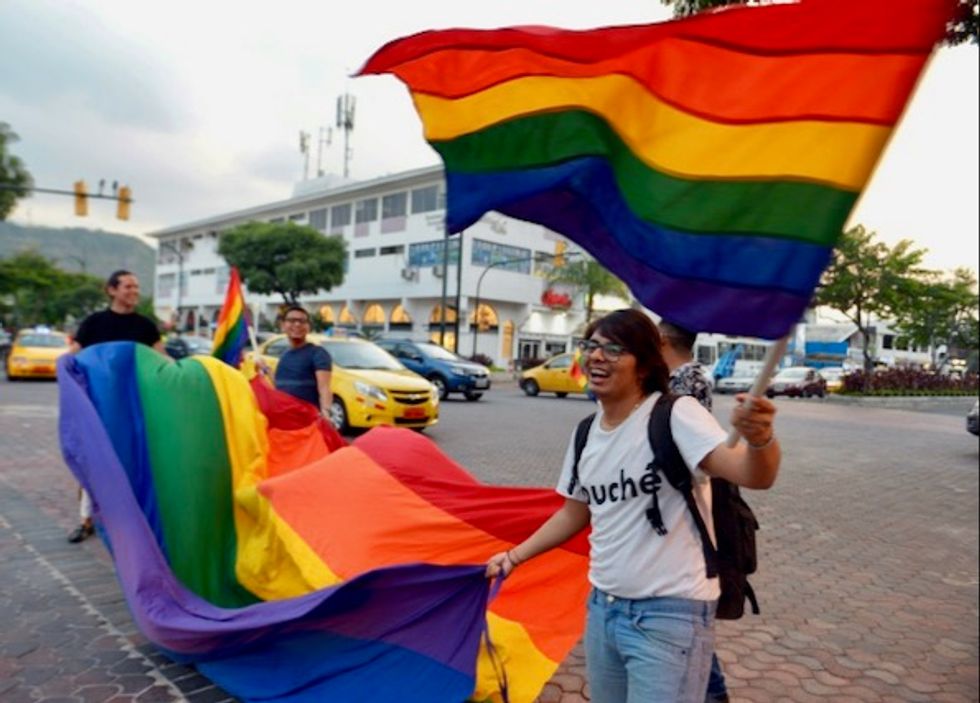 The Constitutional Court said same-sex marriage had been approved in a five-to-four vote of its nine judges in a closed hearing.

"It means that Ecuador is more egalitarian. It is more just than yesterday, that it recognizes that human rights must be for all people without discrimination," said lawyer Christian Paula of the Patka Foundation, which provides legal advice for around 10 same-sex couples seeking to marry in the country.

The four dissenting judges argued that in order to recognize same-sex marriage, constitutional reform would have to be debated in the National Assembly.

Gustavo Medina, a former Supreme Court president, told AFP that Ecuadoran authorities were obliged to abide by decisions of the Constitutional Court, which were "binding and mandatory."

Ecuador has recognized de-facto civil unions for same-sex couples since 2015.

The Constitutional Court approved same-sex marriage as it ruled on lawsuits by two pairs of men who wanted to wed.

The men in one of those couples are named Efrain Soria and Javier Benalcazar.

"I want to say hello to Javier, who is in Guayaquil. Honey, I love you," Soria told reporters in the capital Quito.

He urged other gays to stop hiding and "enjoy the happiness that comes from being equal, like anyone else."

Ecuador's current constitution, ratified in 2008, defines marriage as the union between a man and a woman. It also bars same-sex couples from adopting children.

The Constitutional Court judges that approved same-sex marriage said they based their decision on the idea that all people are equal. They also said they sought to counter any kind of discrimination.

Police reform by another name: COVID mandates causing cops to complain — and quit

One of the only federal legislative initiatives that had any hope for bipartisan agreement in the last few years was the police reform bill that was being negotiated by Senators Corey Booker, D-N.J., and Tim Scott, R-S.C., along with Rep. Karen Bass of California. Although it always seemed like a difficult lift considering the acrimony on both sides surrounding the issue, it seemed for a while that they were actually making some progress. Unfortunately, those talks finally fell apart and now don't seem to have any chance of revival.

Scott, the only Black Republican in the Senate, dishonestly said that he refused to agree to the Democrats' insistence on "defunding" the police — which they were not doing. Booker explained that he finally pulled the plug when Scott backed out of the agreement to codify Donald Trump's executive order. No doubt Scott knew he would be all alone in the GOP if he signed on and simply decided he'd be better off politically if he just abandoned ship altogether.