Elizabeth Warren and Kamala Harris stole the show at the debates -- so why can't we have two women on the ticket? 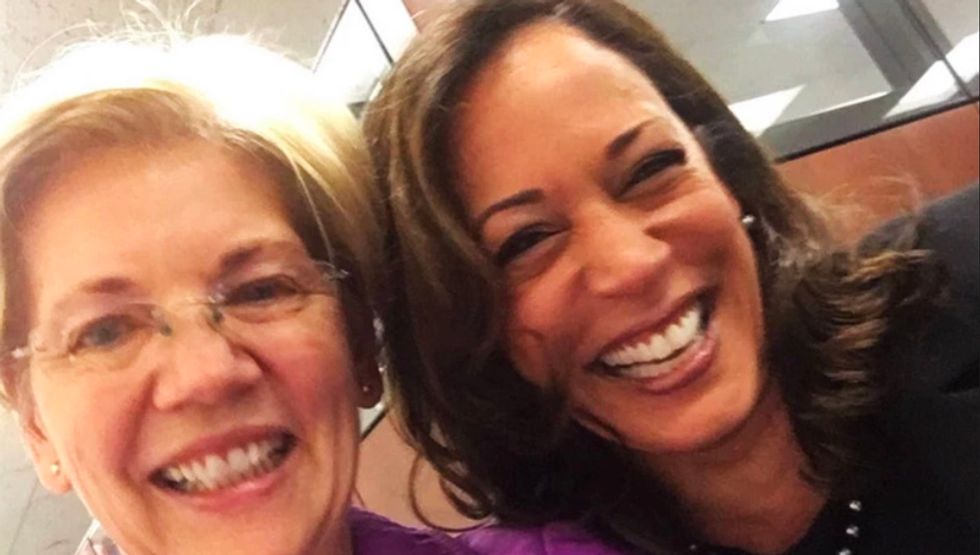 Thanks to NBC and the Democratic National Committee’s televised beauty-contest-turned-big-ugly last week, the Democratic Party no longer looks like the most zealous advocate for the economic plight of the tens of millions of American families for whom every week is a desperate financial struggle.

It was so bad, in fact, that NBC should count the overproduced, glitz-ridden doubleheader as an “in-kind” contribution to Donald Trump’s re-election campaign.

The squandering of Democrats’ working-class advantage came quickly, when candidates took the reactionary bait from NBC’s Savannah Guthrie. “A lot of you have been talking tonight about these government health care plans that you proposed in one form or another. This is a show-of-hands question. And hold them up for a moment, so people can see. Raise your hand if your government plan would provide coverage for undocumented immigrants.”

In an instant there appeared to be near-consensus, with nine of the 10 presidential hopefuls raising their hands to the delight of the studio audience.

But former Vice President Joe Biden appeared ambivalent, which prompted Guthrie to give the supposed frontrunner a chance to opt out of the lemming charge off the cliff.

“Vice President Biden, I believe you said that your health care plan would not cover undocumented immigrants. Could you explain your position?” asked Guthrie.

“Oh, no, I did. I — but,” Biden stammered, having fallen behind in Guthrie’s demeaning game of Simon Says.

[Debate tip: if you want to lead the free world, do not raise your hand as an answer to a complicated question like the one Guthrie pitched. You are being set up for a page-one tabloid hit job.]

Luckily for Uncle Joe, his moment of high-profile disorientation was immediately preceded by a nuanced response from Mayor Pete Buttigieg which Biden echoed with a “Like the Mayor said ...”

Buttigieg explained public health 101: “Our country is healthier when everybody is healthier.” Then the South Bend mayor went on to also explain something that’s not widely grasped by the public: Undocumented immigrants actually pay sales and property taxes, and what he endorsed when he raised his hand was not “a handout” but “an insurance program.”

It got worse for Biden, who seems to have a cognitive issue with both hearing and sequencing. Chuck Todd asked the candidates what Day-One issue they would pick to pursue if they won the presidency.

“The first — the first thing I would do is make sure that we defeat Donald Trump,” responded Biden.

This is what happens when a political party gets into bed with the corporate news media. In exchange for the broadcast platform, the party let neoliberal pundits frame the debate, and Democrats were reduced to caricatures of themselves.

On Wednesday night, Guthrie started off with a loaded corporatist question for Sen. Elizabeth Warren that was premised on an assumption based on an unidentified poll:

“You have many plans: free college, free child care, government health care, cancellation of student debt, new taxes, new regulations, the breakup of major corporations. But this comes at a time when 71 percent of Americans say the economy is doing well, including 60 percent of Democrats. What do you say to those who worry this kind of significant change could be risky to the economy?”

Warren wasn’t done. “It’s doing great for giant oil companies that want to drill everywhere, just not for the rest of us who are watching climate change bear down upon us. When you’ve got a government — when you’ve got an economy — that does great for those with money and isn’t doing great for everyone else, that is corruption, pure and simple. We need to call it out. We need to attack it head on, and we need to make structural change in our government, in our economy and in our country.”

Leadership is about owning the room, understanding where you are in real time, and knowing where things are going next — before everybody else does.

On the second night it was another woman candidate who demonstrated that kind of leadership. When the clown-car debate had careened off into self-destructive incoherence, it was Sen. Kamala Harris who grabbed the wheel.

“Hey, guys. You know what? America does not want to witness a food fight ...” Harris said. Guthrie came back to Harris with a retread of the question she had addressed to Warren the night before, seemingly aimed at throwing shade on her progressive agenda.

“Senator Harris, there’s a lot of talk in this primary about new government benefits, such as student loan cancellation, free college, health care and more. Do you think that Democrats have a responsibility to explain how they will pay for every proposal?”

The California senator would have none of it. “Well, let me tell you something. I hear that question, but where was that question when the Republicans and Donald Trump passed a tax bill that benefits the top 1 percent; and the biggest corporations in this country, contributing at least $1 trillion to the debt of America, which middle-class families will pay for one way or another. Working families need support and need to be lifted up, and frankly this economy is not working for working people.”

With swelling applause punctuating her remarks, Harris was on a roll and the floor was hers.

“For too long, the rules have been written in favor of the people who have the most, and not in favor of the people who work the most, which is why I am proposing that we change the tax code. So for every family that is making less than $100,000 a year, they will receive a tax credit that they can collect, up to $500 a month, which will make all the difference between those families being able to get through the end of the month with dignity and with support or not. And on Day One, I will repeal that tax bill that benefits the top 1 percent and the biggest corporations in America.”

So why can’t we have two women on the ticket?