‘Get rid of them’: Trump and Putin share a laugh over their mutual hatred for journalists 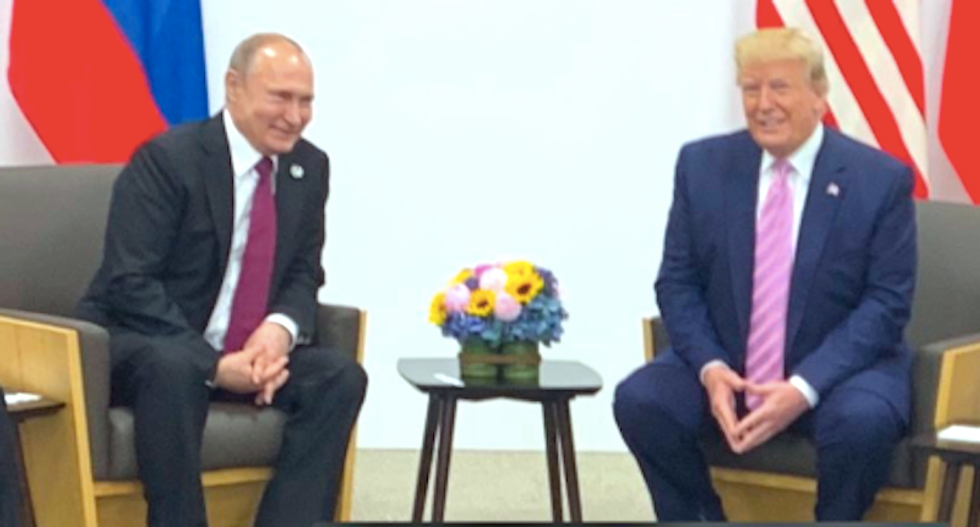 President Donald Trump and Vladimir Putin shared a laugh over getting "rid" of journalists and Russian election interference during the G20 summit in Japan.

The U.S. and Russian presidents formally met for the first time in nearly a year, and Trump smirked as he wagged his finger at Putin, saying, “Don’t meddle in the election, please,” reported The Guardian.

Putin and Secretary of State Mike Pompeo smiled broadly as the U.S. president cautioned against election interference, which Trump appeared to invite earlier this month.

Trump and Putin then joked about their shared disdain for journalists.

“Get rid of them," Trump told Putin. "Fake news is a great term, isn’t it? You don’t have this problem in Russia but we do."

Putin replied to Trump's remarks Friday morning in Osaka: “We also have. It’s the same.”

Trump has excused Putin for murdering journalists and political opponents, saying, "At least he's a leader."

According to a watchdog group, 26 journalists have been murdered in Russia since Putin became president.

Trump frequently refers to the press as the "enemy of the people," and Committee to Protect Journalists watchdog group has raised concerns about the safety of reporters at his campaign rallies.

Trump also bonded with Putin over a scorn for journalists. “Get rid of them. Fake news is a great term, isn't it?… https://t.co/EBdhVQsNQf
— Jennifer Jacobs (@Jennifer Jacobs) 1561710719.0