He'll 'rot in prison': At least one House Dem has bigger plans for Trump than impeachment 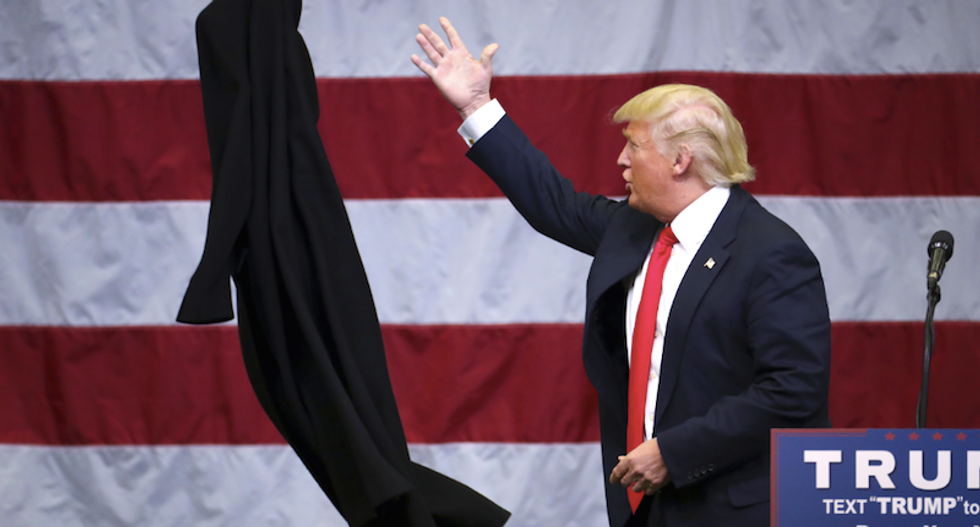 U.S. Republican presidential candidate Donald Trump tosses off his overcoat as he speaks at a campaign event in an airplane hangar in Rome, New York April 12, 2016. (REUTERS/Carlo Allegri)

An increasing number of Democrats have come out in favor of beginning an impeachment inquiry into President Donald Trump's actions in recent days. But Rep. Fre﻿derica Wilson of Florida bucked that trend on Monday by coming out specifically against impeachment, warning it would have negative consequences.

However, she made clear she wasn't opposed to impeachment because she's a fan of Trump or thinks his conduct isn't condemnable. In a tweet featuring an antagonizing and absurd meme, Wilson explained that she feared Trump would benefit from an impeachment push:

As I have argued previously, though, Wilson's argument is spurious. Trump will claim vindication and exoneration regardless. He claimed that Mueller report itself exonerated him, even though it explicitly did not. And if the House follows Wilson's suggestion, Trump will certainly claim that its failure to impeach him, even when the chamber controlled by Democrats, is itself an exoneration, perhaps even stronger than a Senate vote against removing him from office.

More plausibly, a Democrat holding Wilson's position could claim that pursuing impeachment will only drag out the fight, bringing it closer to the election, and that this could work to Trump's advantage. However, it's not clear why or if this is true. It's at least as plausible that, by extending a fight over articles of impeachment, Democrats will have more opportunities to make the case against Trump's suitability for office and thus hurt his re-election chances.

Wilson followed up her argument in a second tweet:

Quinta Juecic, a managing editor for Lawfare and a supporter of impeachment, has been critical of this rhetorical tactic from Democrats. She worries that political leaders should not be pontificating about a specific individual's potential criminal prosecution, a job which should be left to law enforcement, even though the Mueller report essentially punted on the question of Trump's criminal liability.

While many federal prosecutors have clearly said that the Mueller report lays out decisive evidence that Trump is guilty of serious crimes, and future prosecutors may decide to pursue these or other charges against him once he's out of office, there is no guarantee this will happen. Even if Trump is replaced by a Democratic president, he or she may feel forced to pardon the former president for fear of whipping up divisions in the country. So predicting confidently that Trump will be imprisoned is mistaken and risky.

And it's especially bad if such claims allow lawmakers to skirt their own official duty to hold the president accountable. Impeachment is laid out in the Constitution as the answer to a dangerously criminal president. If Trump's conduct is so bad that he should "rot in prison," then he certainly should be impeached.