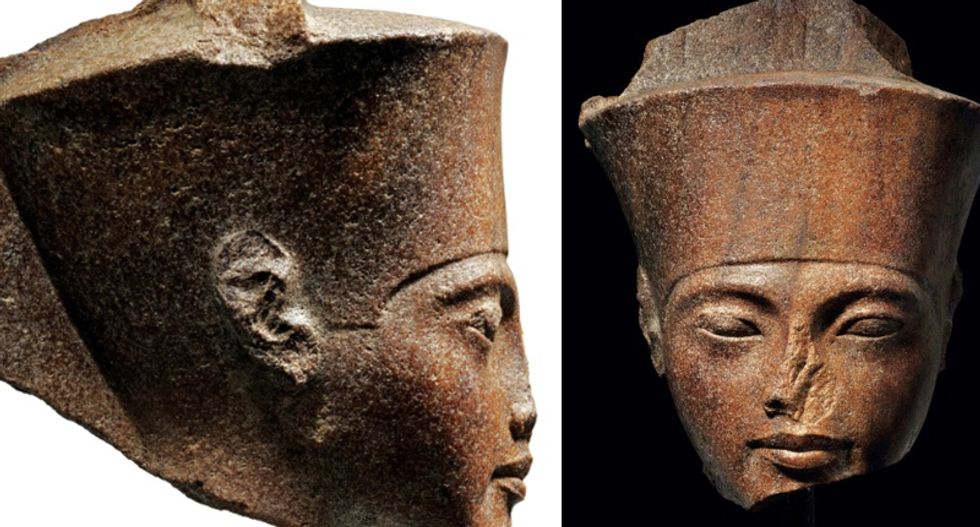 A 3,000-year-old head sculpture of an eternally-young Tutankhamun -- the Egyptian pharaoh known as King Tut -- goes under the hammer this week in London despite an outcry from Cairo.

Christie's expects the 28.5-centimetre (11-inch) brown quartzite relic from the Valley of the Kings to fetch more than £4 million ($5.1 million, 4.5 million euros) on Thursday.

The Financial Times reported that it was the first such Egyptian statuette to go on the market since 1985.

The pharaoh's finely-chiselled head -- its serene eyes and puffed lips emoting a sense of eternal peace -- comes from the private Resandro Collection of ancient art that Christie's last sold in 2016 for £3 million.

But Egyptian authorities overseeing the north African country's unparalleled collection of antiquities want to see the auction halted and the treasure returned.

"The Egyptian embassy in London requested the British foreign affairs ministry and the auction hall to stop the sale," Egypt's foreign ministry said on June 10.

Former antiquities minister Zahi Hawass told AFP on Sunday that the piece appears to have been "stolen" in the 1970s from the Karnak Temple complex of Egypt's great monuments.

"The owners have given false information," he said in a telephone interview.

"They have not shown any legal papers to prove its ownership."

The French-owned British auction house explained that the current lot was acquired by Resandro from a Munich-based dealer in 1985.

It traces its prior origins to the 1973-74 acquisition by another dealer in Austria from the Princely House of Thurn and Taxis in modern-day Germany.

The trail peters out shortly afterwords and little is known to the public about how the statue found its way to Europe.

"Ancient objects by their nature cannot be traced over millennia," Christie's said in a statement released to AFP.

"It is hugely important to establish recent ownership and legal right to sell which we have clearly done," it added.

"We would not offer for sale any object where there was concern over ownership or export."

Britain's Foreign Office has been in touch with Egyptian authorities but is not expected to intervene.

Tutankhamun is thought to have become a pharaoh at the age of nine and to have died about 10 years later.

His rule would have probably passed without notice were it not for the 1922 discovery by Britain's Howard Carter of his nearly intact tomb.

The lavish find revived interest in ancient Egypt and set the stage for subsequent battles over ownership of cultural masterpieces unearthed in colonial times.

International conventions and the British government's own guidance restrict the sale of works that were known to have been stolen or illegally dug up.

The British Museum has been wrangling for decades with Greece over its remarkable room full of marble Parthenon friezes and sculptures.

The late Egyptian strongman turned the existing supreme council of antiquities into a separate ministry in the last year of his rule.

It has worked with the Los Angeles-based Getty Conservation Institute to mend Tutankhamun's tomb from the damage it sustained from swarming tourists over recent years.

But Egypt has been unable to substantiate its case with firm proof that the bust was illegally obtained.

The London auction house said in its defence that there was a "legitimate market for works of art of the ancient world in which Christie's has participated for generations".