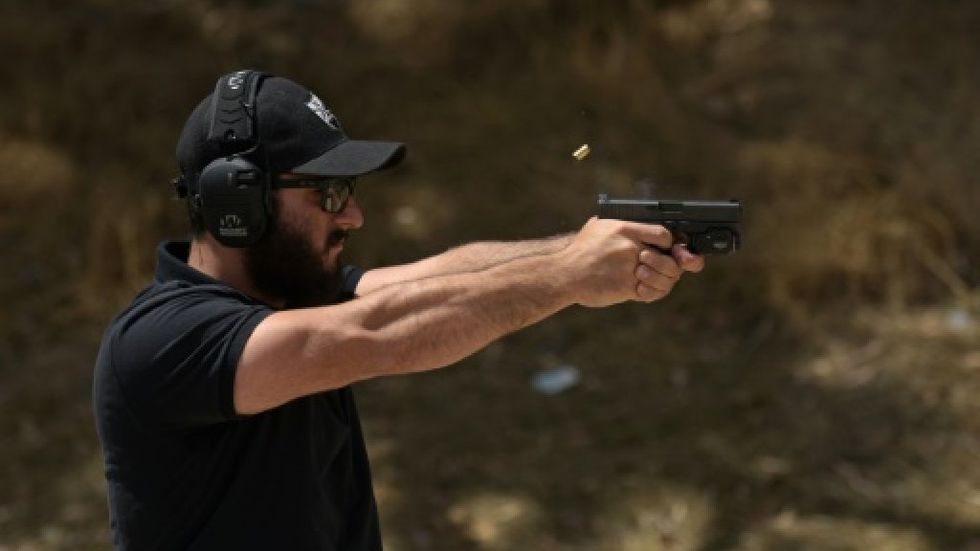 Rabbi Raziel Cohen, aka "Tactical Rabbi," shoots a Glock 9 mm pistol during a demonstration at the Angeles Shooting Ranges in Pacoima, California on May 20, 2019 AFP

Armed guards, safety assessments and now even a "Tactical Rabbi" to train volunteers on the use of weapons -- such is the reality today at synagogues in the United States facing mounting anti-Semitic attacks.

It is at a shooting range in the hills overlooking Los Angeles that a team of AFP reporters met recently with Raziel Cohen, dubbed the "Tactical Rabbi," who was sporting a 9mm pistol on his hip and carrying a semi-automatic rifle over his shoulder.

Cohen was trying to determine how well books can stop bullets. The idea is to transform a library at a synagogue or Jewish school into a shelter in the event of an active shooter situation.

"We're trying to bridge the gap between the time that the shooting begins and law enforcement arrives," he told AFP.

"The expression that goes on is that we carry guns because we can't carry police officers, which is not just a joke," added Cohen. "The reality is that there can't be police everywhere all the time."

Cohen, who has been passionate about guns since his youth, is a security expert and certified shooting instructor who has taken part in counter-terrorism courses given by retired and elite active-duty military personnel.

Born into a religious family, Cohen is also a rabbi for the Chabad-Lubavitch community in Los Angeles. Chabad is a sect of Hasidic Judaism, and Los Angeles is second only to Brooklyn, New York in its number of Chabad congregations.

Cohen said his expertise in security took on more meaning after the April 27 shooting at the Chabad Poway Synagogue near San Diego that left one dead and three wounded.

It came six months after a shooting at a Pittsburgh synagogue left 11 people dead -- the worst attack against Jewish people in the modern history of the United States.

"In fact, in the Bible it says that you have the obligation to protect yourself."

Anti-Semitic incidents in the United States remained at near-record high levels in 2018, according to the Anti-Defamation League, which recorded 1,879 incidents, the third-highest level since the 1970s.

2017 had marked an unprecedented rise in such incidents, with 1,986 cases of harassment, vandalism or anti-Semitic attacks recorded, the organization said.

Cohen said given the uptick, it was the duty of the Jewish community to learn to fend for itself.

But not everyone agrees with Cohen's reasoning.

Ivan Wolkind, chief operating officer of the Jewish Federation of Greater Los Angeles and founder of the federation's security program, said some 500 groups have joined the program, exchanging information and security tips with police or the FBI.

Wolkind, a reserve officer with the Los Angeles Police Department, said while he wholeheartedly believes in prevention, he is not convinced that arming worshippers is the answer.

"I can't make a judgment as to whether or not people should have weapons in their place of worship but what I can say is to have people carrying weapons without a huge amount of training... is potentially very very dangerous," he told AFP.

He said his program focuses on prevention rather than encouraging worshippers to arm themselves.

"We put 98 percent of our energy into left of bang -- recognizing, preventing and mitigating the effects of an attack."

Wolkind said he fears that people who undergo weapons training may feel overconfident and ignore warning signs leading up to a shooting.

"They may stop looking for some of the pre-incident indicators that I feel are so important," he said.

He said his security program has been so successful that churches, mosques and even the Church of Scientology have reached out for advice.

"We've got a lot of experience," he said. "And we are absolutely open to sharing that with anyone and everyone as other people try to do the same thing in their communities."