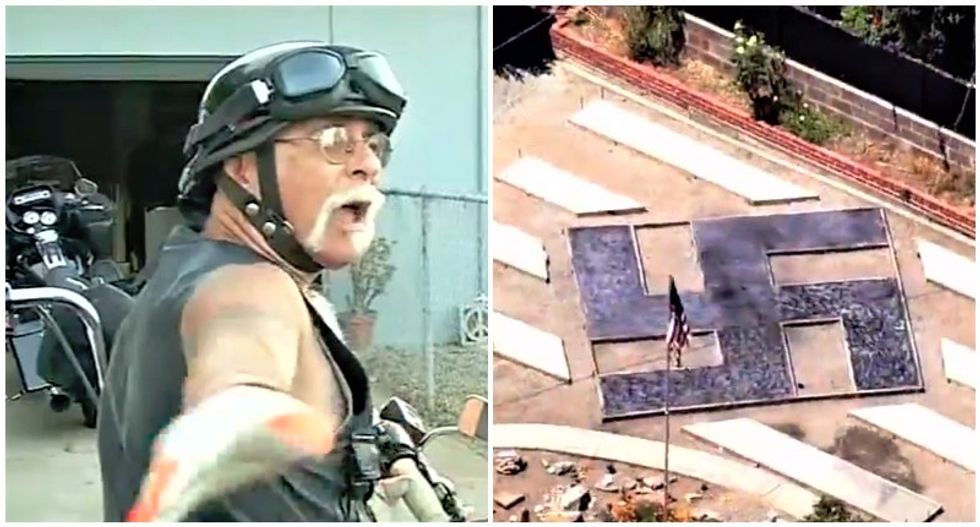 Steve Johnson, left, a resident of El Sobrante, California who has created a massive swastika on his lawn (Screen caps).

A man from El Sobrante, California has horrified many in his neighborhood by creating a massive swastika on his property -- but he's insisting that people shouldn't see it as a racist symbol.

Local news station ABC 7 reports that El Sobrante resident Steve Johnson has drawn a firestorm of criticism by replacing a dirt lot in his yard with a giant swastika symbol like the one used by the Nazis during the Third Reich.

When asked about the Swastika by ABC 7, Johnson tried to claim that it's a "Tibetan" symbol -- despite the fact that his symbol faces clockwise like the Nazi symbol, whereas the traditional Buddhist symbol cited by Johnson faces counterclockwise.

An ABC 7 reporter asked Johnson if he was Tibetan and he replied, "I could be."

Renee Schultz, a Jewish neighbor of Johnson's, tells ABC 7 that she doesn't buy that the massive swastika in her neighborhood is a harmless symbol.

"Yes!" she told the station when asked if she was offended by what her neighbor had done. "On behalf of 8 million Jews that died with that -- yes, absolutely!"

Johnson, however, is remaining defiant and he told ABC 7 that "I own this house I'll put what I want."