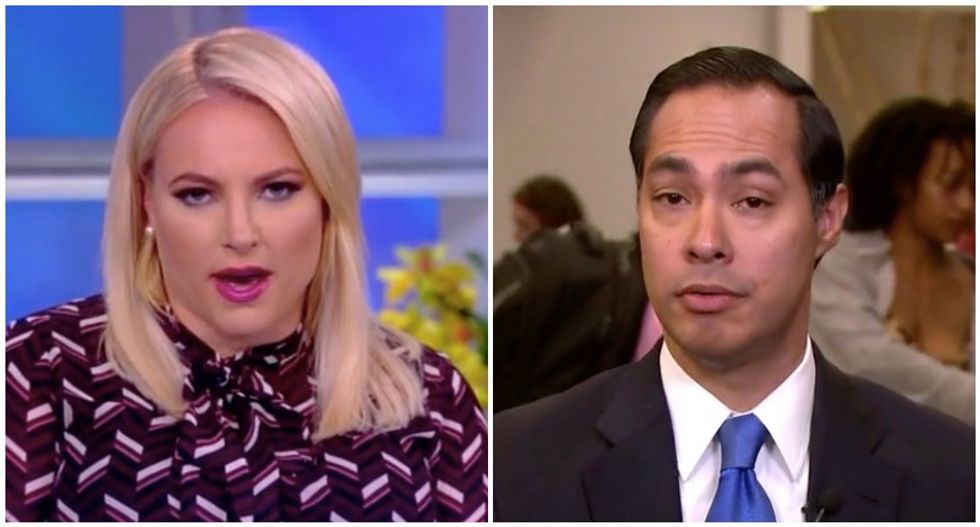 The Democratic presidential candidate hadn't slept yet after taking part in the first primary debate Wednesday and making multiple television appearances Thursday morning after drawing widespread praise for his performance, and he made a remote appearance on "The View."

"I hear what you are saying," McCain said, "but if you decriminalize, aren't you calling for open borders, and how can you enforce any rules if there are no repercussions for doing something illegal?"

Castro tried to correct her characterization of his views.

"Well, there would be repercussions," he said. "Somebody is still in the court system, they're still subject to be deported, if that's the determination of the court. So what's the difference between somebody charged with a misdemeanor crime and somebody charged a civil violation? At the end of the day, they're still in that civil court process, and they may well be deported, so this is not open borders. That's a right-wing talking point."

"With all due respect, sir," she began, "I don't think it's a right-wing talking point when you are saying that someone who is doing something illegal, that there shouldn't be ramifications, which at a certain point, if you become a general election candidate against Trump, you're going to have to win over people like me who are skeptical of this."

Castro dismissed her criticism as absurd.

"How can we possibly say that we have open borders when we have 654 miles of fences, thousands of personnel at the border?" he said. "We have planes, we have boats, we have helicopters, we have guns. We have security cameras and states like my home state of Texas that put an extra $800 million into border security."

"We can maintain a secure border," Castro added, "and people are still subject to the law, but what I don't believe we should do is criminalize desperation. We should criminalize crime, and the point that I made last night was, if we're concerned about human trafficking or drug trafficking, we already have laws to criminalize that and hold people accountable for that."