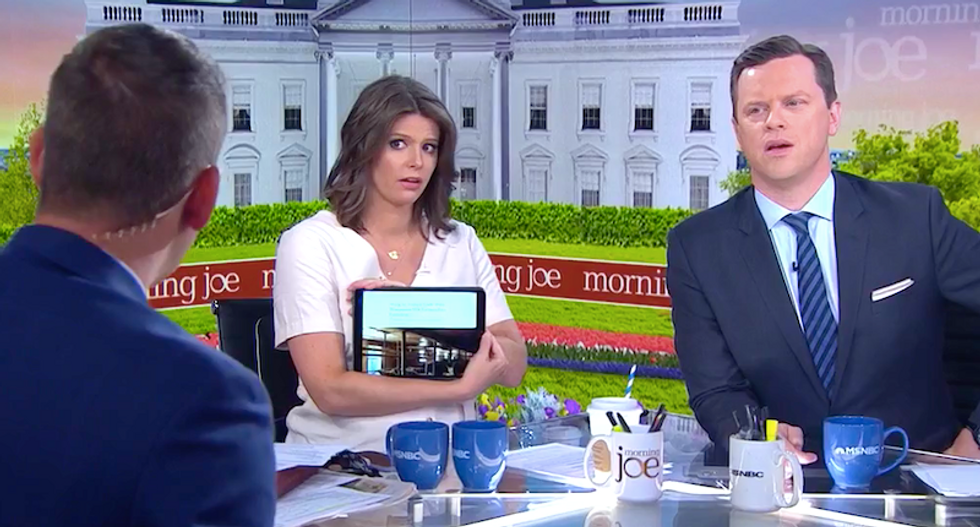 Rep. Sean Duffy (R-WI) repeatedly denied that President Donald Trump's tariffs would hurt consumers -- despite being presented with evidence that they would.

The Wisconsin Republican has introduced a bill the president expansive new powers to raise tariffs in response to actions taken by other countries, but he insisted consumers wouldn't get caught in the middle.

"They haven't yet," Duffy said. "Have prices gone up in the grocery store?"

The "Morning Joe" co-host pushed back, saying prices had gone up, but Duffy challenged the panelists to prove it.

Co-host Kasie Hunt pointed to statements by Larry Kudlow, the White House chief economic adviser, who contradicted Trump and admitted tariffs would be passed along to U.S. consumers.

"Larry was going to walk that back," Duffy said.

"You don't believe that a tariff forces prices to raise and pass that on to consumers?" Geist said.

Duffy insisted the tariffs would force a realignment of the supply chain that would cut out China and boost imports from other countries, but Geist pressed on.

"So tariffs don't rise prices on consumers?" he asked again.

"They haven't yet," Duffy said.

"You don't believe that, fundamentally," Geist said. "As a rule of economics, though, do you believe that?"

Duffy argued that the inflation rate had not changed since Trump's tariffs were announced, and then he changed the subject to Chinese technology and copyright theft, which he claimed the tariffs would end.

The GOP lawmaker then argued that Trump's tariffs would help boost U.S. manufacturing and bring jobs back to the industrial Midwest.

Geist and Hunt looked on with their eyes wide and mouths agape as Duffy insisted Trump's tariffs would restore farming and manufacturing jobs -- and help him win re-election -- without passing along additional costs to consumers.

"These jobs are coming back, people can go to work," Duffy said. "We have employers competing for their labor, which means their salaries are rising, and that's why President Trump, I think, is going to win Wisconsin and Michigan, and he's going to win Ohio and very well has a great shot at Pennsylvania. So you're missing the boat on how well he's doing."

That's when Geist pulled the plug.

"We've got a million more questions for you, but not enough time to ask them," he said. "We'll have you back very soon, Congressman Sean Duffy."