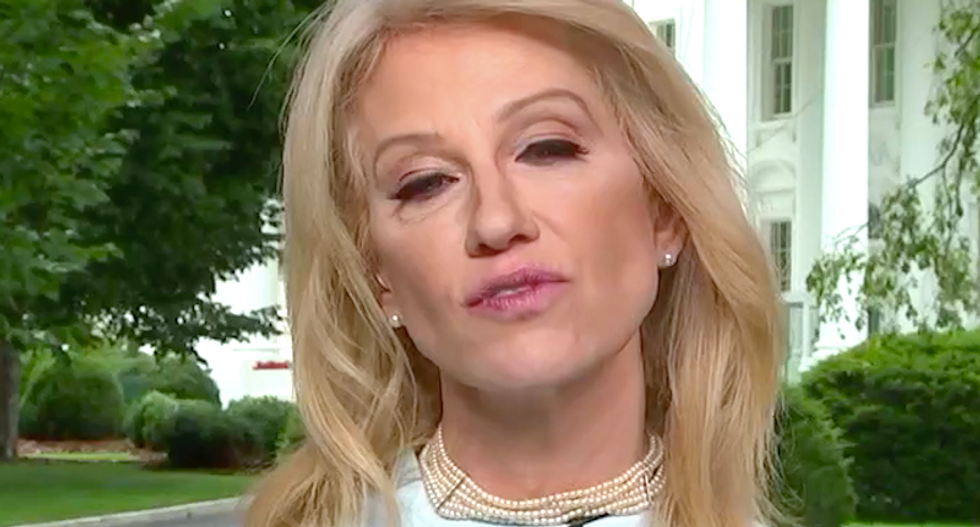 Kellyanne Conway accused MSNBC broadcasters of lying about collusion by the Trump campaign in a freewheeling and combative appearance on the network.

The White House senior adviser insisted that President Donald Trump had cooperated fully with special counsel Robert Mueller, and said his report had ultimately cleared him and his associates of wrongdoing -- but she said House Democrats and the media were trying to redo the investigation to obtain different results.

"I'll point you back to when the Mueller report first came out, journalists like you were asking us, well, when will you move on, how long will you keep on sort of preening and saying there is nothing in the Mueller report other than what we have already known?" Conway said. "Yet it's them who are in Congress trying to do a do-over of a report that is the authoritative, definitive, conclusive and final word on what was investigated. It was meant to be investigating collusion by a foreign government in a campaign that I ran to a successful end, and we already, as a nation, have spent 22 months and tens of millions of dollars in taxpayer money."

MSNBC's Kristen Welker pointed out that Mueller had cited Congress as the ultimate authority in any investigation of the chief executive, and she asked why the White House would not cooperate in congressional oversight.

Welker reminded her that Mueller explicitly cited Congress in his report -- and Conway accused MSNBC of misrepresenting the report's findings.

"I read the report," Conway said. "He cites many things in his report, including that there was no collusion, despite the fact that your network said it many times every single day for many years, respectfully. One thing in the report that is important to note is the job of the special counsel is to refer an indictment or decline a referral on indictment -- that is it."

"Words like exoneration is really not appropriate responsibility," she added. "When you said that the Congress has an oversight responsibility, oversight is different from overreach, and you're yet to point out to me, as is anyone else, what would be new in these investigations. What would be new in this testimony other than what we've already seen in the actual Mueller report. People were worried for very many months -- you're going to fire Mueller and we need to protect Mueller and the president is interfering."

Welker then corrected Conway on her claims about MSNBC broadcasters.

"Just to be clear, no one here ever came to any determination about what may or may not have been in the Mueller report," Welker said.

"I think some of your talking heads have, yes," Conway said.

Welker then tried to pin her down on the issue of executive privilege.

"Let me just stay on topic here and just be very clear, because you talked about those privileged documents," she said. "Can we take that as confirmation that the White House will be in communication with (the Department of Justice) about what documents are turned over and whether they may be subject to executive privilege as it relates to that deal that was struck between (Rep. Jerry) Nadler and DOJ?"

"No, I will not confirm that," Conway said. "But I would remind you that the president has said many times as have we who speak on his behalf that executive privilege is an option on the table."