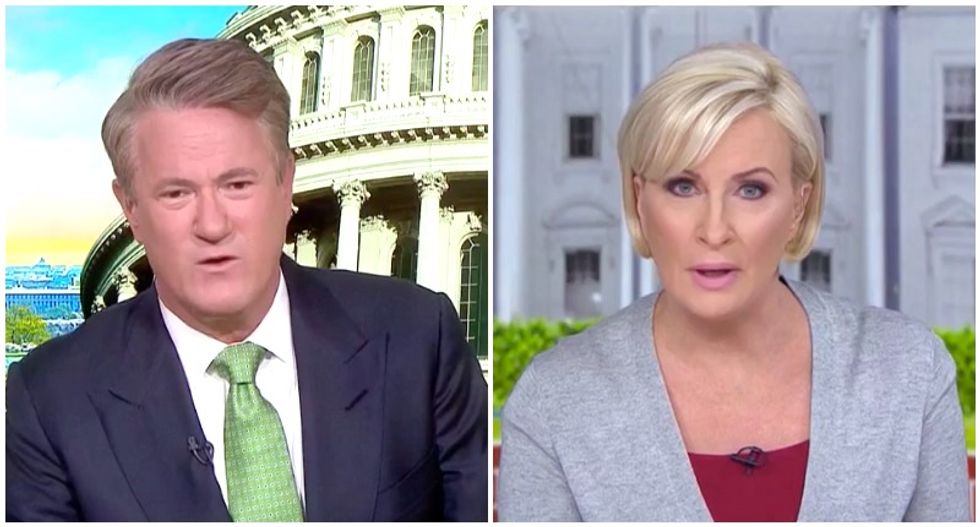 The "Morning Joe" co-hosts were grappling with Trump's invitation to foreign adversaries to interfere with the 2020 election, and they agreed that he had repeatedly confessed to crimes in TV interviews.

"Mika was saying when he did that, she said, 'This guy is so bad, and others say he's so evil, he's so evil,'" Scarborough said. "I said, 'Well, yes, okay, I get what you're saying, but wouldn't a truly evil guy have answered the question to Lester Holt (about firing FBI director James Comey over Russia), 'No, no, that's not why.'"

"Wouldn't a truly evil guy say to George Stephanopoulos, 'Of course I would report it, I would report it instantly -- in fact, I've hired three lawyers, and they're going to be scanning throughout the entire government, we're going to have the toughest task force on foreign interference ever,' while he's actually calling China and calling Russia and saying, 'Hey, you got anything, you got anything?'" he continued. "That's the thing about Donald Trump."

"That's the thing about Donald Trump," Scarborough added. "It's all in plain view. This is a guy that just blurts out whatever is in the front of his head at the time."

"He's a bad dude," Deutsch agreed, "but to your point, Joe, it's interesting, it's almost childlike -- as he takes the cookie -- did you take the cookie? I didn't take the cookie. He genuinely doesn't think it's wrong. That's how demented he is, or whatever word you want to attach to him, that in front of the entire world, why wouldn't I? Wouldn't everyone? You can almost say is he evil or just no moral compass? There's no compass there to even look at."

Brzezinski finally got a chance to object to Scarborough's characterization of her comments.

"I want to take myself out of a box here," she said. "I never said he's evil and my reaction is not oh, he's evil. My reaction to what happened the other night, when he said that is to George Stephanopoulos, was this is horrendous, horrendous for our democracy."

"He is a national security threat," she added, "and what he does is not stupidity. What he is doing is not evil playing out before our eyes. What he does is he manipulates the truth, he desensitizes the American public and the world to what is right and wrong, and does things in plain sight -- and the results are evil. What happens in a dictatorship, what happens when evil forces step in is this -- slowly chipping away at our values, slowly chipping away at our democracy and that, whether he knows it or not, whether he's planning it or not, whether he gives a damn or not, that's what's happening."