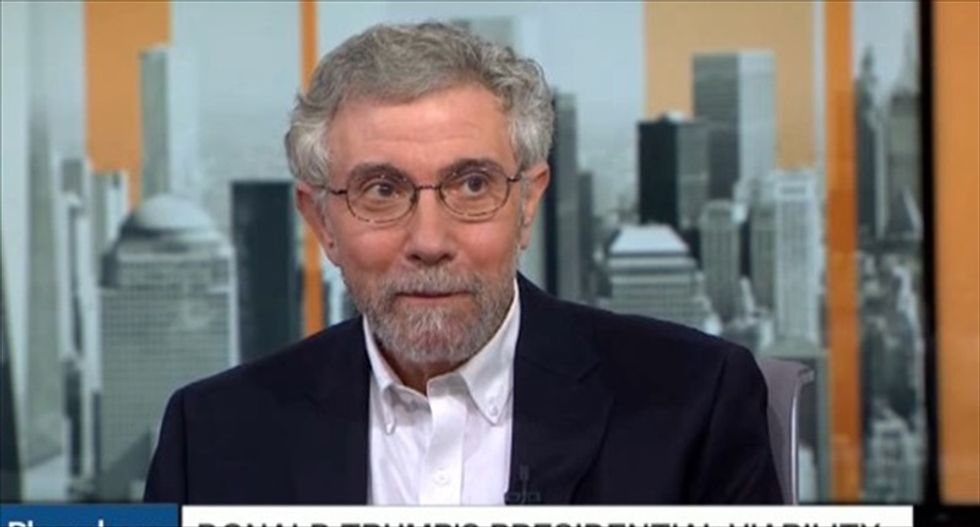 A very feisty Paul Krugman dragged Donald Trump over the coals for trying to claim victories while foreign leaders are playing him like a "chump" because he can easily be bought off with flattery.

In a column for the New York Times, the Nobel Prize-winning economist could all but contain his amusement at Trump's boasting that he had worked out a trade deal with Mexico that -- as Krugman points out -- looks remarkably similar to the one that preceded it.

Pointing to Trump's all-caps tweet boasting Mexico will be "buying large quantities of agricultural product (sic) from out patriotic farmers," Krugman dryly added, "1. Why, like so many Trump tweets, does it read like a bad translation from the original Russian? 2. What the heck is he talking about? "

"There was, after all, no mention of agricultural products in the statement of agreement. And Mexico, while a big buyer of U.S. farm goods, is a market economy: private businesses, not government officials, decide how much Iowa corn Mexico will buy in a given year," he explained.

More than that is the fact that Trump's threat to impose tariffs had little to do with the agreement, which had been largely agreed upon months ago, and it was Trump's  joy at patting himself on the back for a victory that was not a victory that amused Krugman..

"The only thing we can be sure of is that whatever happens, Trump will claim to have achieved a great victory," he wrote. "In the case of the Mexican standoff, this may not seem too bad. But think about what it means when foreign leaders know that the president of the United States is: (a) gullible (b) easily susceptible to flattery and (c) eager to proclaim victory, and unwilling to admit that he didn’t actually get anything significant."

"Basically, this turns America into a systematic chump. Hold a summit, flatter Trump’s vanity, let him issue a communiqué claiming vast achievement, then go on doing whatever you wanted to do," he elaborated. "Just ask North Korea’s Kim, who snookered Trump into thinking he’d made major concessions, went right back to building up his nuclear attack capacity, and still gets praised by Trump as our allies watch in horror."

"In any case, the bottom line from the Mexico fiasco is that the U.S. is now significantly less credible and less respected than it was a few weeks ago," he pithily concluded. "And things will probably keep getting worse."