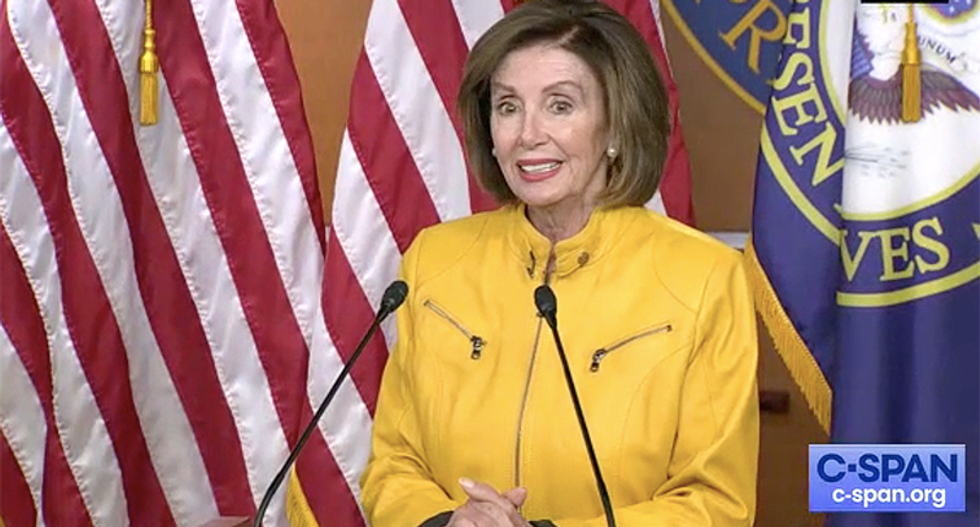 House Speaker Nancy Pelosi (D-CA) said Thursday that it was "sad" the president can't understand the difference between right and wrong. She said it's clear that he believes the Constitution doesn't apply to him.

The moment came after President Donald Trump said in an ABC interview with George Stephanopoulos that the FBI was “wrong” to claim that candidates should report it if a foreign entity offers them dirt on an opponent during an election. The president has tried to turn it around to say that he was talking about meeting with foreign officials.

She recalled the late Rep. Tom Downey (D-NY) who was working with Al Gore and turned a stolen debate briefing book over to the FBI.

"He picked it up and sent it to the FBI. This isn't even foreign governments," she recalled. "This isn't even foreign governments. There's a sense of decency about fruit from the forbidden tree. Ill-gotten gain about how -- then Gov. Bush would have conducted that debate. This is so -- and just by -- your question, with all due respect, you make it sound as if it could be a common thing. It's not."

She noted that what Trump said in his ABC interview revealed his values and ethics.

"What the president said last night shows clearly once again over and over again that he does not know the difference between right and wrong. That's probably the nicest thing I can say about him," she said. "If he doesn't know the difference, it could explain some of his ridiculous behavior. And now to invite further involvement of foreign governments into our election."

She reinforced that the Russian meddling was an attack on the United States.

"There was an assault on our democracy. An assault on our country that has been clearly documented by the intelligence community," Pelosi continued. "And the president of the United States said coming to the defense of our democracy has said it's a hoax. This is beyond -- it's really -- there's no sense of -- what's the word I want to find? Any ethical sense that informs his comments and his thinking."

"We're going to get the truth for the American people so they can know what the attack is on our country, what the president refused to do about it, and what he engaged in to cover up what was done," Pelosi pledged.

Pelosi also walked through all of the pieces of legislation that Congress has passed that the U.S. Senate has refused to bring up for a vote at the hands of Majority Leader Mitch McConnell (R-KY).