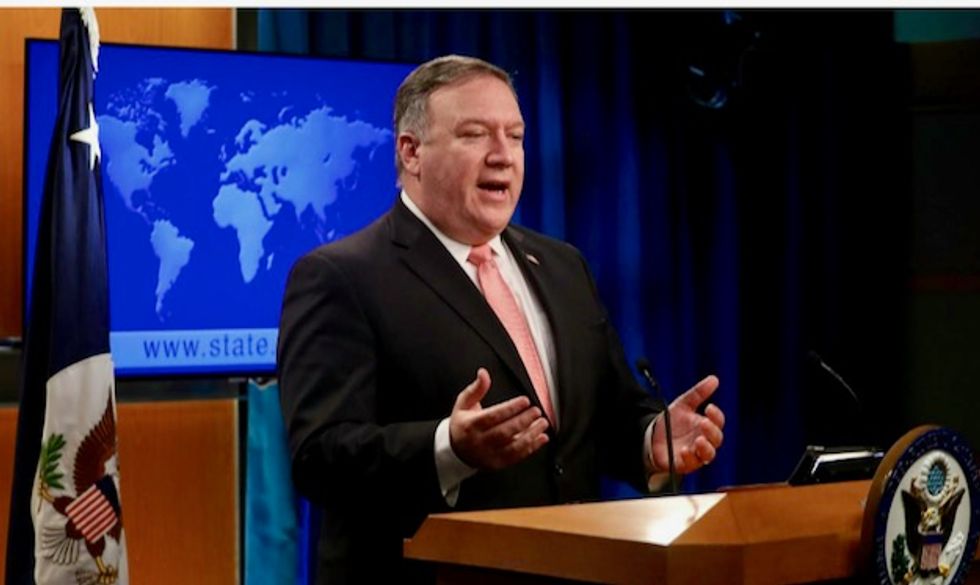 US Secretary of State Mike Pompeo accused Iran of being behind attacks on two tankers in the Gulf of Oman Thursday, and said it was taking the case to the UN Security Council.

"It is the assessment of the United States that the Islamic Republic of Iran is responsible for the attacks," Pompeo told reporters.

"This is based on intelligence, the weapons used, the level of expertise needed to execute the operation, recent similar Iranian attacks on shipping, and the fact that no proxy group operating in the area has the resources and proficiency to act with such a high degree of sophistication," Pompeo said.

Pompeo said Iran "promised" on April 22 to disrupt oil shipping from the Strait of Hormuz.

"It is now executing that promise," he said.

He said the attacks Thursday, which left two tankers in flames off Iran's south coast, were part of a series of attacks instigated by Tehran and its surrogates.

"Taken as a whole, these unprovoked attacks present a clear threat to international security, a blatant assault on the freedom of navigation, and an unacceptable campaign of escalating tension by Iran," the top US diplomat said.

He said Iran is lashing out because of the impact of US and international sanctions, but said it had no right "to attack innocent civilians and engage in nuclear blackmail."

Pompeo said he had ordered the US envoy to the United Nations, Jonathan Cohen, to raise the alleged attacks in the UN Security Council meeting Thursday afternoon.

He said US policy aims to bring Iran back into negotiations over its nuclear program and regional activities.

However, he added, "The United States will defend its forces, interests and stand with our partners and allies to safeguard global commerce and regional stability."

"And we call upon all nations threatened by Iran to join us in that endeavor."

Meanwhile President Donald Trump on Thursday said it is too early even to consider entering negotiations with Iran.

Trump said that he appreciated the mediating mission to Tehran on Thursday by Japanese Prime Minister Shinzo Abe, which was met with a sharp rebuff by Iran's supreme leader Ayatollah Ali Khamenei.

Nevertheless, said Trump, "I personally feel that it is too soon to even think about making a deal. They are not ready, and neither are we!"