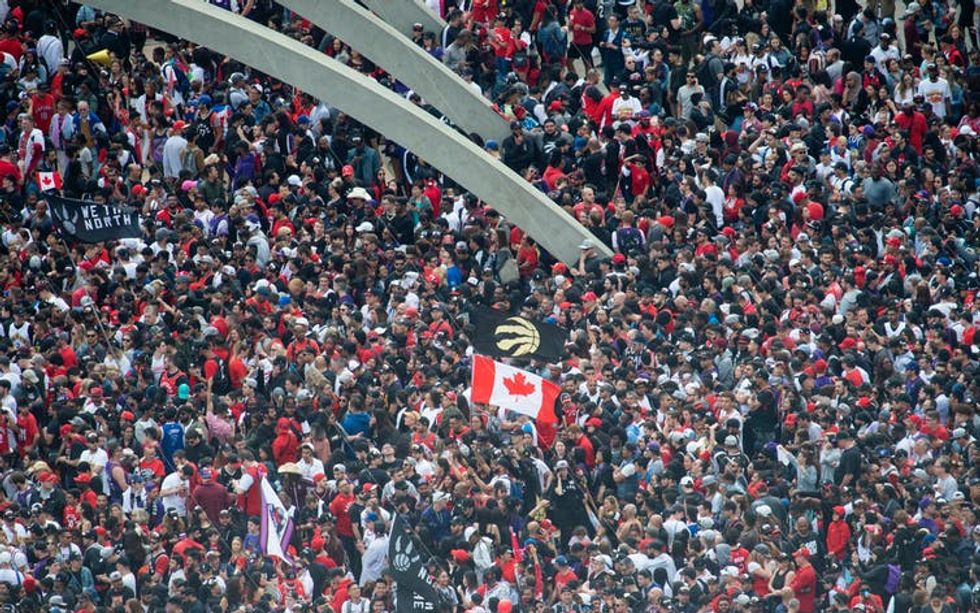 Carding and racial profiling continues unabated - even as the multicultural unity of Canada seems to be at an all time high after the Raptors’ NBA victory as seen here at the victory parade on June 17. THE CANADIAN PRESS/Andrew Lahodynskyj

During what was probably one of the most exciting and gratifying moments of his professional life, moments after the Raptors’ NBA finals victory on Thursday, a California sheriff’s deputy stopped Raptors president, Masai Ujiri from walking onto the court for the Raptors’ trophy presentation The deputy carded him and asked him for his credentials.

Even though he is the president of the Toronto Raptors’ basketball team and even though it was his own team’s victory ceremony, as a Black executive, he was treated with suspicion, as if he was trespassing.

That same day, a conflict studies and human rights student at the University of Ottawa and vice-president of academic affairs for the program’s student association, Jamal Koulmiye-Boyce, was also racially profiled, carded and harassed by security, on his own campus. According to Koulmiye-Boyce as well as bystander accounts with audio and video recordings, he was skateboarding on campus when security asked him to stop.

Living and breathing while Black: Racial profiling and other acts of violence

Security guards then demanded he show ID. When he explained that he left his wallet with his ID in his on-campus student office, the guards accused him of trespassing, and aggressively handcuffed and detained him. They then called the police.

Koulmiye-Boyce was held for several hours in the back of a police car before he was allowed to leave. The only reason guards held him? Skateboarding without a wallet. Even though Jamal is like many other students on campus, he was treated as a security threat because he is a Black student.

For too many Black Canadians, this type of scrutiny is a reality.

How do we reconcile the daily racism that Black people face in our country with our public expressions of multicultural pride?

Canadians loved watching the Raptors achieve their dream of becoming NBA champions for many reasons: the tough losses and inspired comebacks; the “business trip” attitude that athletes maintained under extreme pressure; the giant parties emulating Jurassic Park popping up all over the county.

But I believe that for many Canadians, one of the most exciting aspects of the Raptors’ playoff victory was its feel-good multiculturalism.

Many Raptors’ fans are proud that General Manager Ujiri is the first African GM in the NBA. Ujiri often praises Canadian multiculturalism and makes jokes about how much better Canada is than the United States when it comes to welcoming immigrants, thanking “Donald Trump for making Toronto an unbelievable sports destination.”

The sight of superfan Nav Bhatia leading what he calls a “beautiful rainbow” of Canadian fans after a Raptors’ win in the land of Trump sure feels good. And media stories about fans like 15-year-old Yasmin Said help as well. Said matches her red hijab to the Raptors’ logo when she plays basketball with the Hijabi Ballers, a group that encourages young Muslim women to get involved in sports. As a nation, we seem delighted by these beautiful multicultural moments.

Many Canadians were also incensed when Mark Stevens, a white co-owner of the Golden State Warriors shoved Raptors’ Kyle Lowry in game 3 when he bumped into courtside fans. Canadian outrage about American racism feels good.

But as journalist Chelby Daigle argues, sometimes Canadians prefer to talk about “the multicultural wonderland of Canada as opposed to the evil U.S …” as a way to minimize the trauma of anti-Black racism in Canada and as a way to deflect blame and responsibility. Our multicultural pride also “reduces the Black experience in the U.S. to just being victims of racist violence, while ignoring the agency, creativity, ingenuity and resiliency of Black Americans.”

Canadians, Daigle contends, are letting themselves and the entire nation off the hook because Canada doesn’t suck as badly as “the nation could possibly suck.”

Canadians may cherish the idea that we are more open, more multicultural and more benevolent than Americans, but the realities of systemic racism in Canada are real and well documented. White Canadians are less burdened by pollution than other racial groups. They have longer life expectancies, higher incomes and better educational opportunities. White Canadians are more likely to receive better healthcare. They are less likely to be incarcerated, to be stopped and searched by police and to face bias in the Canadian criminal justice system.

These issues are not isolated or random events, but are part of long historical, structural and ongoing acts of “state-sanctioned violence and concerted neglect of Black people.”

Carding has been banned but continues anyway

What happened to Jamal Koulmiye-Boyce also raises questions about security policies and the abuse of power by campus protection services. According to the University of Ottawa’s security regulations, “members of the protection services are authorized to request proof of identity from persons on campus.”

New rules banning random carding by police came into effect in Ontario in 2017. These regulations are supposed to ban police from collecting identifying information arbitrarily or based on a person’s race. However many community groups don’t think these changes go far enough. Why are security guards allowed to randomly ID people on campus while police officers are, in theory, not allowed to infringe on people’s rights in this way?

At the University of Ottawa campus, we need resources, events and supports specifically dedicated to combatting anti-Black racism and supporting Black students, staff and faculty as well as recruitment and retention related to Black students, staff and faculty. And white campus members need to learn about anti-Black racism and do the work of sharing this knowledge with other white people as well.

If the purpose of university protection services, according to the University’s regulations, is “to enhance the security of persons and their property, to ensure that their rights are protected”, then we have to ask, whose security and rights is the university safeguarding? Certainly not Jamal’s.

While displays of Canadian multicultural unity may feel good, including expressions of Raptors fandom in the form of parades and jerseys, as long as Black Canadians are singled out for greater scrutiny in Canadian society, multiculturalism acts as a facade that allows anti-Black racism to continue.

Corrie Scott, Assistant Professor at the Institute of Feminist and Gender Studies, University of Ottawa