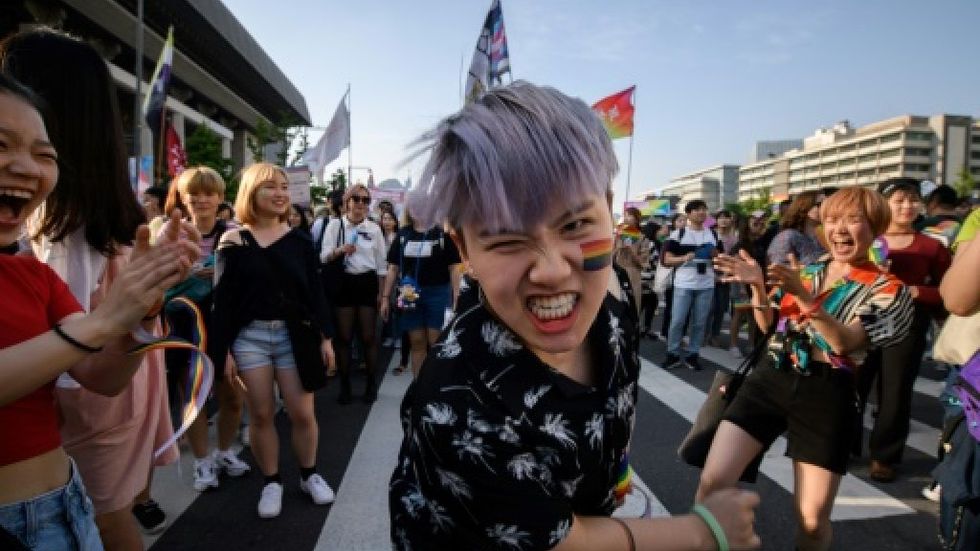 Tens of thousands of LGBT South Koreans and their supporters paraded through central Seoul Saturday for the capital's 20th gay rights march, with ruling Democratic Party members taking part for the first time.

The parade, some 70,000 strong according to organisers, made its way through the South Korean capital with participants dancing on open truck beds and waving rainbow flags.

"People who used to be invisible are here to show that they exist," said Jeong Min-hee, a 26-year-old participant.

"It's so much fun, I'm very excited and it feels so good to be in solidarity with others."

South Korea is Asia's fourth biggest economy and a capitalist democracy, but lived through decades of military rule when evangelical Christianity was widespread and framed the communist North as evil.

Christian churches still have enduring political influence in the South, and they are now targeting sexual minorities, activists say.

"The conservative Christians consider both -- communists and sexual minorities -- as deserving to be demonised in South Korean society," said Lim Bo-rah, a senior pastor at an LGBT-friendly church in Seoul.

But changes in society are afoot. Members of the ruling, left-leaning Democratic Party (DPK) participated in the event for the first time this year and CASS, one of the South's largest beer brands, on Friday became the country's first major company to openly support gay rights.

The South Korean President Moon Jae-in -- a former human rights lawyer -- has spoken only vaguely on gay rights. His political rivals and LGBT activists say he is trying not to alienate supporters.

As the front-runner in the presidential race in 2017, Moon said in a television debate that he "opposed" homosexuality in the military.

"We decided to participate because we wanted to show that LGBT people and their allies exist even within the ruling party," said Kim Min-seok, one of some 30 DPK members who showed up at the parade, waving the party flag.

"I often felt we were invisible within the DPK -- many members wouldn't even think about the possibility of our existence", Kim said.

The participation of the ruling party's members was announced prior to the event and sparked intense controversy, triggering the spokesperson for the main opposition, conservative party Min Kyung-wook to say the Democrats should "come out" as a "queer" party.

Homosexuality is not illegal in South Korea but there is currently no legislation outlawing discrimination.

It is also the world's only advanced economy to make consensual gay sex between soldiers a crime under military rules.

It is a marked contrast to Taiwan -- which also has Confucian cultural components, a history of dictatorship, and has enjoyed an economic boom in recent decades.

But earlier this month Asia's first gay marriages took place on the island after it legalised the change.

Activists say the difference is religion: South Korea has proven fertile ground for religious groups that offered comfort and salvation that appealed during times of deep uncertainty following the Korean War.

Now more than 20 percent of South Korea's population are Protestant Christians, surveys show, compared to about five percent of Taiwanese.

Thousands of Christian protesters turned out to protest the event on Saturday, holding up signs that read "Repent and come back to Jesus. He loves you."

A cross-section of society were present, including buddhists, Korean-American adoptees, asexuals and parents of sexual minorities.

In previous parades, "young LGBT people would come to us and cry in arms whenever we gave them free hugs," said Lee Sun-young, who works for Parents and Families of LGBTAIQ people of Korea.

"We always remember them. I hope they know that the world is changing, although slowly."