'Spinelessness': Schumer and Pelosi under fire after Democrats join GOP to give Trump $4.6 billion in border funding without protections for children 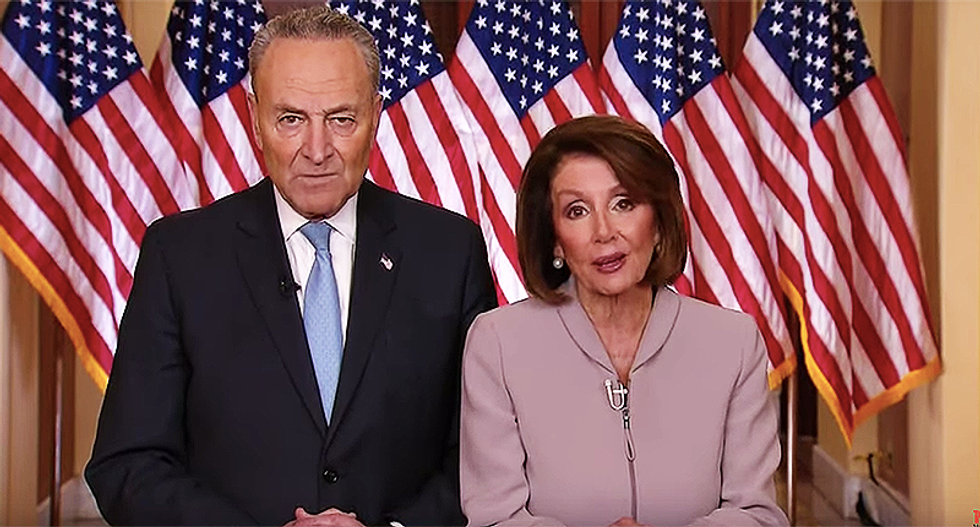 "Schumer is as much responsible for this as Pelosi... it's appalling."

"I am looking for a new pharmaceutical drug that builds spines."

That was Rep. Pramila Jayapal's (D-Wash.) reaction on Thursday after House Speaker Nancy Pelosi capitulated to Republicans and so-called moderate Democrats by agreeing to pass a $4.6 billion Senate border aid package that contains virtually no protections for immigrant children detained by the Trump administration.

"Skating under the radar are Schumer and Senate Democrats, who deserve just as much blame for their spinelessness, who gifted McConnell his leverage."

While Jayapal and other progressives were quick to note that Pelosi deserves criticism for approving the Senate legislation—which was strongly opposed by the Congressional Hispanic Caucus and immigrant rights groups—they argued Senate Minority Leader Chuck Schumer (D-N.Y.) should share the blame for failing to whip his caucus against the measure.

Progressive Democrats said Schumer's failure to fight the Republican legislation left the House with no leverage to negotiate stronger protections for migrant children, who are currently enduring horrific conditions in Border Patrol detention facilities in Texas and elsewhere.

After Pelosi announced Thursday that she would "reluctantly" support passage of the GOP Senate bill despite progressive outrage, the legislation sailed through the House Thursday evening with the backing of 129 Democrats.

"Listen," Jayapal told reporters, "I think Leader Schumer and all the Senate Democrats have to understand that we need them to stand up and oppose."

Jayapal also slammed Pelosi's decision to give in to McConnell and so-called "moderate" Democrats an interview with Politico, saying: "We can't say that we have a lawless administration or a president who should be in prison, or whatever people want to say about him, but then cave. You have to fight for what you believe."

Jayapal's anger at the Democratic leadership for refusing to fight the Senate bill was echoed by Rep. Alexandria Ocasio-Cortez (D-N.Y.), who said Pelosi's decision to capitulate to McConnell was an unacceptable "abdication of power" that will give the Trump administration a blank check to continue harming children at the border.

"The problem right now and the question at hand is Mitch McConnell sent us a bill and we're putting a big checkmark on it instead of even trying to negotiate," Ocasio-Cortez, who opposed all new funding for Trump's deportation force, said during an interview on CNN. "What Mitch McConnell is doing is that he's relying on the time pressure of [July 4] recess to try to ram through a bill that is completely irresponsible."

Rep. Ilhan Omar (D-Minn.) also spoke out against the passage of the package and said the funding bill was a wasted opportunity to help children who remain in dire need:

As the New York Times reported Thursday, Pelosi's decision to approve the Senate bill came after she received "private assurances" from Vice President Mike Pence that the Trump administration would "abide by some of the restrictions she had sought."

"They included a requirement to notify lawmakers within 24 hours after the death of a migrant child in government custody, and a 90-day time limit on children spending time in temporary intake facilities," the Times reported, citing a person familiar with the discussions.

The "restrictions" Pelosi reportedly pushed for amounted to less than the protections Jayapal sought in House negotiations over the border aid package.

In a statement on Thursday, Jayapal said she pushed for "strong guard rails to specify that children should get food, water, medical care and legal services; that no child should be kept in these facilities for more than 90 days; and that private, for-profit contractors who violate these standards would have their contracts terminated."

Pelosi's private negotiation with Pence, which ended with no binding restrictions, sparked fury on social media.

"Schumer is as much responsible for this as Pelosi but, yes, it's appalling," tweeted The Nation's Jeet Heer.

Alexander McCoy, political director for anti-war group Common Defense, noted on Twitter that Pelosi is deservedly "getting a lot of the flak" for allowing Republicans to ram through legislation that was strongly opposed by immigrant rights groups and the Congressional Hispanic Caucus.

"But," McCoy added, "skating under the radar are Schumer and Senate Democrats, who deserve just as much blame for their spinelessness, who gifted McConnell his leverage."