Adding to the mountain of statistical evidence showing the severity of U.S. inequality, an analysis published Friday found that the top one percent of Americans gained $21 trillion in wealth since 1989 while the bottom 50 percent lost $900 billion.

"We have the worst inequality in this country since the 1920s."

Matt Bruenig, founder of the left-wing think tank People's Policy Project, broke down the Federal Reserve's newly released "Distributive Financial Accounts" data series and found that, overall, "the top one percent owns nearly $30 trillion of assets while the bottom half owns less than nothing, meaning they have more debts than they have assets."

The growth of wealth inequality over the past 30 years, Bruenig found, is "eye-popping."

"Between 1989 and 2018, the top one percent increased its total net worth by $21 trillion," Bruenig wrote. "The bottom 50 percent actually saw its net worth decrease by $900 billion over the same period." 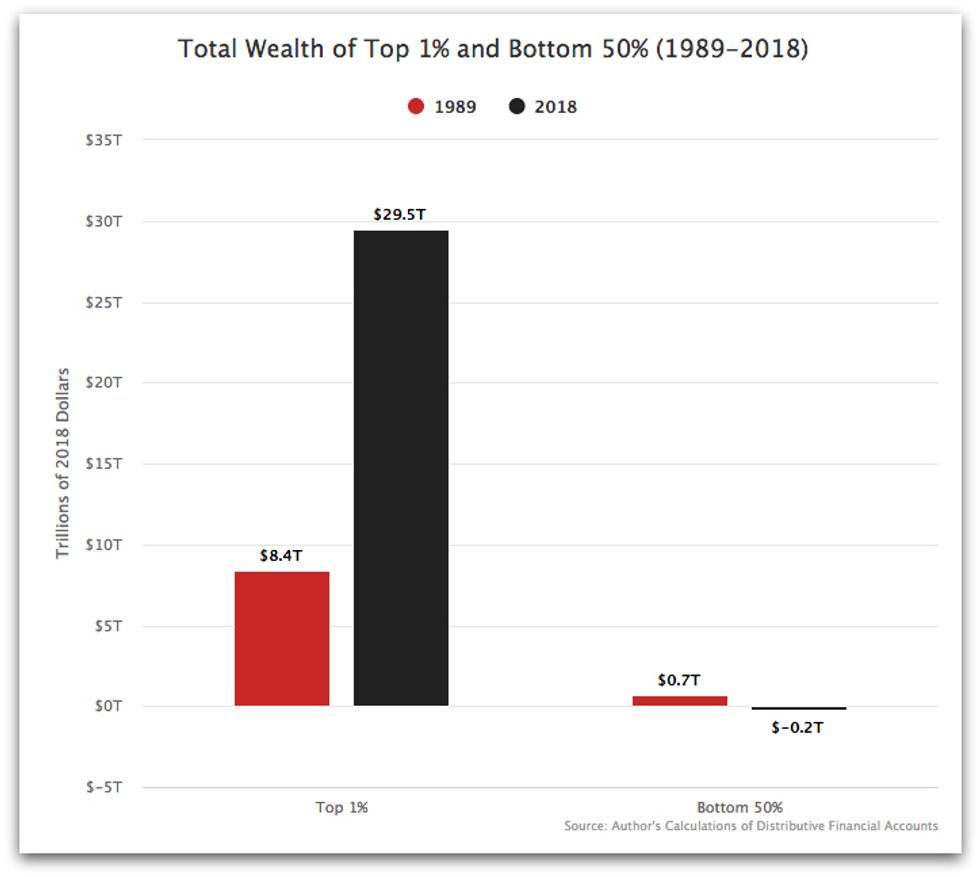 "We have the worst inequality in this country since the 1920s," wrote Jayapal, co-chair of the Congressional Progressive Caucus. "Three wealthiest people in America have as much wealth as the bottom 50 percent."

The list also included, "I own a small hotel chain in the United States called the Trump Organization."

Other indicators listed in the 34-page booklet include "posing with weapons and imagery associated with violent extremism in photos or videos," and "deleting, hiding or manipulating social media as part of an effort to plan a specific act of violence," Axios reports.

"Members of the community such as relatives and peers are almost always the first to pick up on hints of violent motivations and are 'often best positioned to witness signs of mobilization to violence,'" according to Axios.

CBS News notes that while the report is not specifically tied to the Capitol insurrection, "families and friends of defendants have played an outsized role turning in relatives after learning of their alleged involvement in the breach."

"In one such instance, prosecutors say Guy Reffitt of Texas, who was indicted on multiple counts including obstructing the official proceeding of counting electoral college votes, threatened his children after they learned of his alleged involvement in the attack," the network reports. "Reffitt allegedly told his son and daughter following January 6, 'If you turn me in, you're a traitor and you know what happens to traitors...traitors get shot.'"

He pleaded guilty in August to mailing a threatening postcard, signed "KKK," to California Democratic Congresswoman Maxine Waters, who is Black.

Gallagher's threat to Waters was among at least 75 he sent to politicians across the country who were critical of former president Donald Trump.

“We’re going to hang your head off the Washington Monument, you piece of Communist (expletive)," Gallagher once wrote to House Speaker Nancy Pelosi. He also threatened to shoot Senate Majority Leader Chuck Schumer.

“This is based on a number of factors, beginning with Mr. Gallagher’s prompt admission of guilt and genuine contrition, which includes his statement to an agent after the search of his house that he had been ‘scared straight,’" Tartakovsky wrote. “Other factors include his age, his lack of a prior record, the absence of evidence that he had any intent actually to carry out any of his threats, his insignificant likelihood of re-offending, and the sufficiency of the conviction itself to provide general and specific deterrence.”

In an apology letter, Gallagher wrote: “Throughout the last presidency, I was impacted by the political polarization of our country. That’s when I started on the reproachable path of mailing threatening postcards, for which I am painfully sorry and ashamed. I think I believed I was sending a message about my political views. But now I realize that these views and my conduct were terribly misguided and shameful.”

Gallagher is scheduled to report to jail in March after being sentenced in December. A transcript from his sentencing hearing wasn't available, the newspaper reported.

This West Point professor used to idolize Robert E. Lee – then he learned the terrible truth about the cruel enslaver