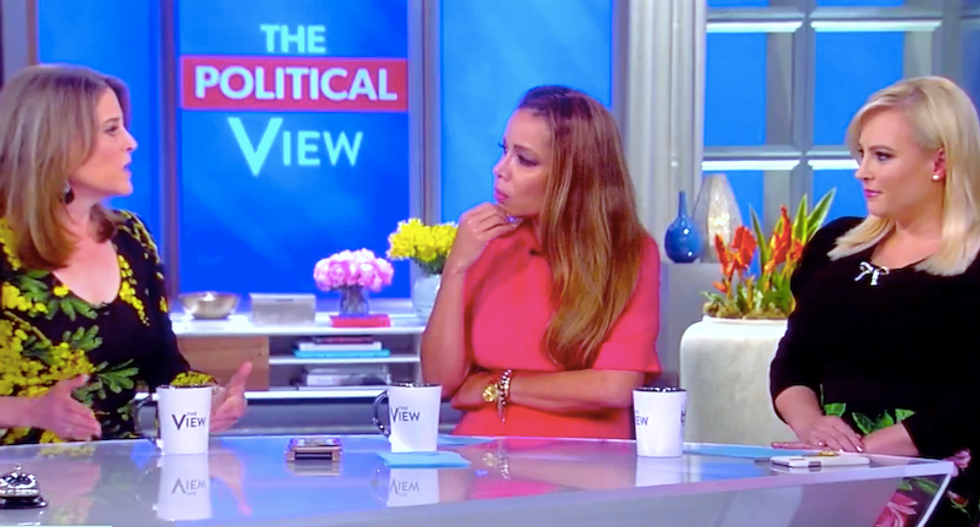 The long-shot candidate has apologized for describing vaccination mandates as "draconian" and "Orwellian," saying she believes vaccines are important but understands public skepticism, and co-host Meghan McCain asked her to square those views with her advocacy for children.

"This sounds a lot like Trump, just so we're clear, this is his message," McCain said. "You're talking a lot about children of America, the children, how much you care about children, you also just came out as the anti-vaxxer candidate."

Williamson pushed back, saying McCain was misrepresenting her position.

"First of all, I am not anti-vaccine," she said. "I think I misspoke in that one sentence, but I'd like to express myself. The fact that you have a problem -- and this is what I'm talking about here. The fact that you have a problem with the revolving door policy by which Big Pharma and the CDC and the FDA are so cozy, so that millions of Americans who are not anti-science and are not anti-vaccine have some deep concerns."

"The days of blind faith in Big Pharma are over," Williamson added, "the days of blind faith in the idea that our government agencies are doing the proper oversight and proper advocacy for the American people, against at times of overreach against profit-making industries that are putting money before people, that is not an irrational or unreasonable thing."

McCain asked if she'd changed her mind on the issue of mandatory vaccines, and Williamson insisted she hadn't.

"I haven't changed since yesterday," she said. "I misspoke on that one sentence, but I will say this. If I were president of the United States, when I'm president of the United States, there will be a commission of scientists talking about -- learning so that the American people see what's going on with these vaccines who are not paid by Big Pharma."

Ana Navarro asked whether the author and motivational speaker was running for president to boost her profile, and the panel briefly joked about her appearing on "Dancing With The Stars," but co-host Sunny Hostin steered the conversation back to vaccinations.

"I don't know that you have answered Meghan's question," Hostin said. "Do you support mandatory vaccinations?"

Williamson again tried to have it both ways.

At this point, Joy Behar had heard enough.

"This kind of nebulous answer makes people paranoid," Behar said. "Yes or no?"

Williamson stopped just short of answering the question before the commercial break.

"I would have to say that there are situations where there are absolute outbreaks," she said, "and I understand there are epidemics where vaccines are life-saving. I support vaccines."