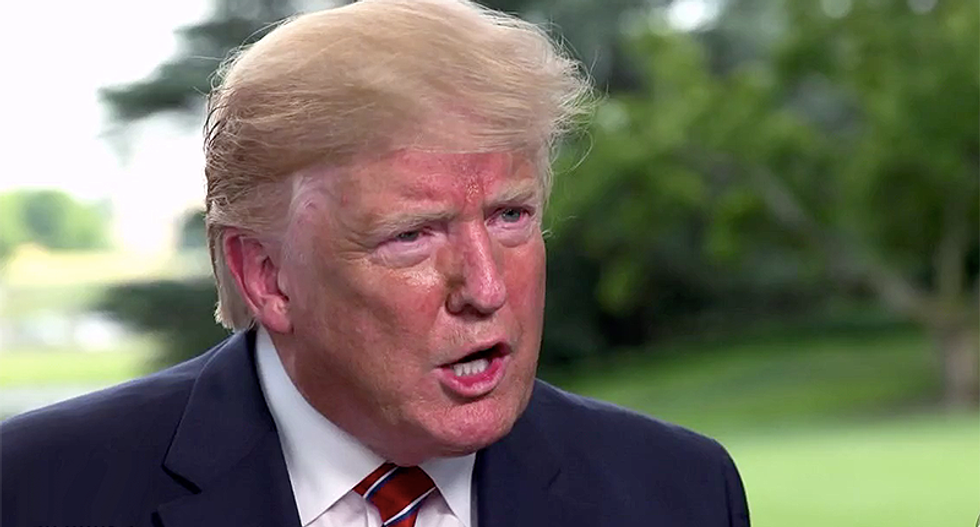 European Central Bank chief Mario Draghi sparked anger from US President Donald Trump on Tuesday, when his hint at future interest rate cuts lifted eurozone markets and pushed the euro down against the dollar.

"Mario Draghi just announced more stimulus could come, which immediately dropped the Euro against the Dollar, making it unfairly easier for them to compete against the USA," Trump said via Twitter.

"They have been getting away with this for years, along with China and others," he added.

Hours earlier, Draghi had told a conference in Sintra, Portugal that "further cuts in policy interest rates... remain part of our tools" as the bank looks to juice growth and inflation.

Eurozone policymakers had already discussed potential rate cuts at a regular meeting of the ECB's governing council in early June, but Draghi's Tuesday remarks were the first to catch markets' attention.

They sent Germany's DAX index of blue-chip shares back into the black from negative territory -- up 1.5 percent around 2:45 pm (1200 GMT) -- and pushed the euro down as much as 0.3 percent against the dollar, to $1.12, before rebounding slightly.

It was "the clearest indication yet that the bank will cut interest rates and relaunch its asset purchase programme in the coming months if... measures of inflation and inflation expectations remain very low," said Andrew Kenningham of Capital Economics.

From the start of his presidency in 2017, Trump accused trading partners like China and eurozone heavyweight Germany of currency manipulation.

Both countries, along with others like Japan and South Korea, remain on a Washington watchlist, the US Treasury department said last month, but have not been formally singled out as manipulators.

The ECB blames weakening economic growth on US trade conflicts with the EU and China, as well as the looming threat of a no-deal Brexit and slower performance from emerging economies.

Sluggish expansion has in turn kept inflation short of the central bank target.

At 1.2 percent in May, price growth was well short of the ECB goal of just below two percent.

"In the absence of improvement, such that the sustained return of inflation to our aim is threatened, additional stimulus will be required," Draghi said.

Aside from rate cuts, other moves could include restarting "quantitative easing" (QE) purchases of government and corporate debt, which amounted to 2.6 trillion euros ($2.9 trillion) between 2015 and 2018.

After months of speculation about when North Atlantic central banks would raise rates, the slowdown has turned the conversation around.

The ECB said in June it would not hike until mid-2020 at the earliest, and is considering wheeling out some of its heaviest monetary artillery again after only a short pause.

And the US Federal Reserve is also making hints towards its first rate cut in more than a decade as confidence ebbs from the economy.

A move to lower rates in Frankfurt "could be linked to movements in exchange rates, depending on the Fed's upcoming decisions," Pictet Wealth Management strategist Frederik Ducrozet told AFP.

Any further lowering of rates in the eurozone would be a step further into the unknown for the ECB, which has since 2014 charged banks to park cash with it, using a negative deposit rate now at -0.4 percent.

"We think the bank will cut its deposit rate from -0.4 to -0.5 percent in December," Capital Economics' Kenningham predicted.

With the negative rate costing banks billions of euros per year, some policymakers have suggested a "tiering" system to exempt some of their deposits, as some central banks like Sweden's Riksbank already use.

Meanwhile any restart of QE might require loosening some of the ECB's self-imposed rules on the scheme, designed to fend of allegations it is financing government spending by printing money.