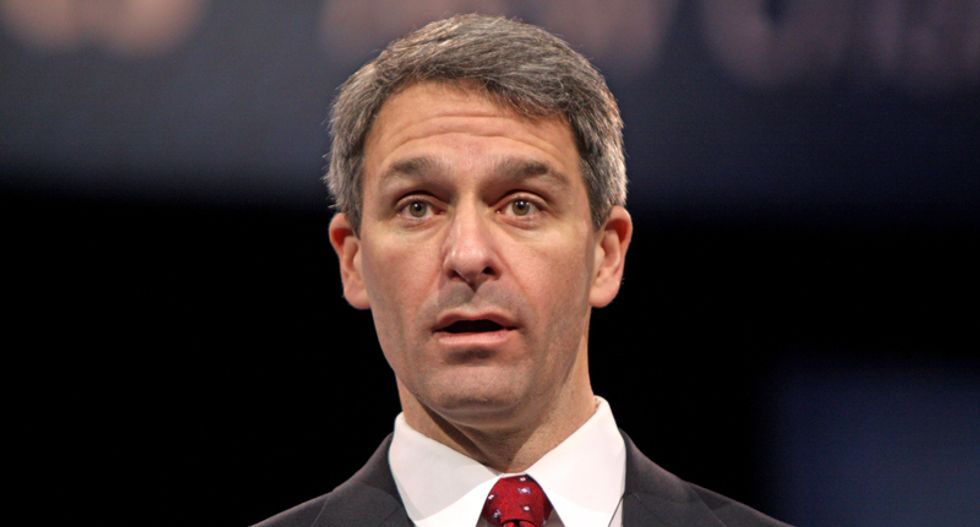 'By What Statutory Authority Did the President Purport to Appoint Cuccinelli as Acting Director of USCIS?'

Former Virginia Attorney General Ken Cuccinelli without notice showed up for work today as the Acting Director of the U.S. Immigration and Customs Enforcement (USCIS) agency, after President Donald Trump appointed him to the post.

Some legal experts are warning that Trump does not have the authority to make the appointment.

Cuccinelli is best known for his extreme positions on issues ranging from abortion to climate change to homosexuality and marriage. He has called homosexuality "against nature and harmful to society," and even worked to make oral sex illegal, only to be shot down at the Supreme Court.

During his tenure as Virginia's Attorney General he investigated climate scientists, arguing they were engaged in fraud, and has worked to rescind birthright citizenship – which is in the U.S. Constitution – and even tried to force employees to speak only English in the workplace.

Saying he is "honored to be given the opportunity," Cuccinelli via a press release announced that USCIS "has the extraordinary responsibility to administer and protect the integrity of our nation’s lawful immigration system. Our nation has the most generous legal immigration system in the world and we must zealously safeguard its promise for those who lawfully come here," echoing President Trump's anti-immigrant agenda.

But some legal experts question if President Trump has the authority to appoint Cuccinelli Acting Director of USCIS.

Cuccinelli, in an email to USCIS employees, said he wants to "work to find longterm solutions to close asylum loopholes that encourage many to make the dangers journey into the united states so that those who truly need humanitarian protections and meet the criteria under the law receive them," as Buzzfeed's Hamed Aleaziz reported.

Aleaziz adds DHS officials aren't sure this is even legal.

Another DHS official had this to say: "I’m concerned about the effect on the agency, both in morale and in direct… https://t.co/oaItXepMq0
— Hamed Aleaziz (@Hamed Aleaziz)1560186997.0

Stephen Vladeck, Professor of Law at the University of Texas School of Law is also calling in to question the legality of the appointment. He took to Twitter to make his case, saying Cuccinelli "doesn't meet any of the criteria under the Federal Vacancies Reform Act of 1998."

I could be missing something, but by what statutory authority did the President purport to appoint Cuccinelli as Ac… https://t.co/fU5U9kx2VG
— Steve Vladeck (@Steve Vladeck)1560181277.0