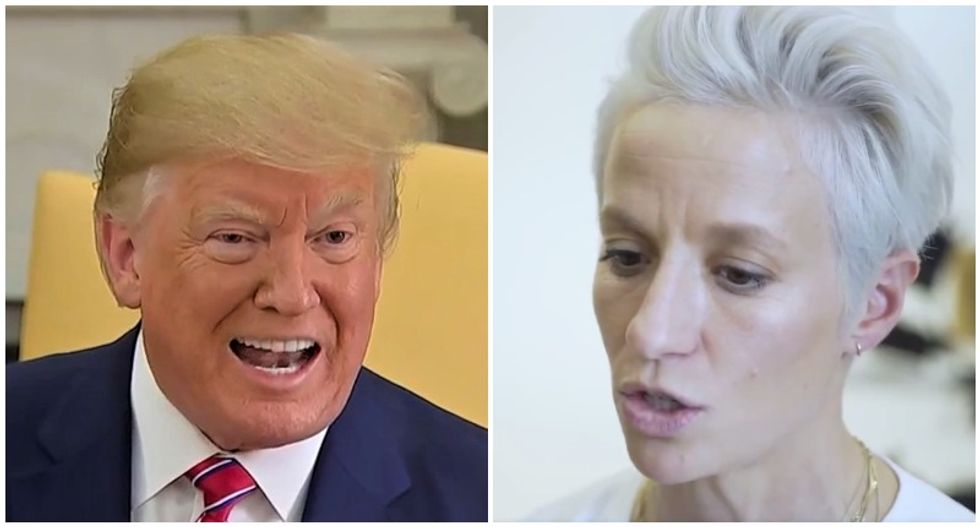 President Donald Trump lashed out at a U.S. women's national soccer team who has publicly criticized him.

“I’m not going to the f*cking White House,” Rapinoe told Eight by Eight Magazine, saying she doubted Trump would risk inviting them. “We’re not gonna be invited. I doubt it.”

Trump has canceled visits by other championship teams, such as this year’s Philadelphia Eagles, after most of the players vowed to decline the invitation.

The president attacked Rapinoe and promised to invite the women's national team if they won the World Cup championship.

"Women’s soccer player, @meganrapino, just stated that she is 'not going to the F...ing White House if we win,'" Trump tweeted. "Other than the NBA, which now refuses to call owners, owners (please explain that I just got Criminal Justice Reform passed, Black unemployment is at the lowest level ..in our Country’s history, and the poverty index is also best number EVER), leagues and teams love coming to the White House."

"I am a big fan of the American Team, and Women’s Soccer, but Megan should WIN first before she TALKS! Finish the job!" he added. "We haven’t yet...invited Megan or the team, but I am now inviting the TEAM, win or lose. Megan should never disrespect our Country, the White House, or our Flag, especially since so much has been done for her & the team. Be proud of the Flag that you wear. The USA is doing GREAT!"