Trump thinks he's going to make history with North Korea -- but he's 'on the road to nowhere': conservative 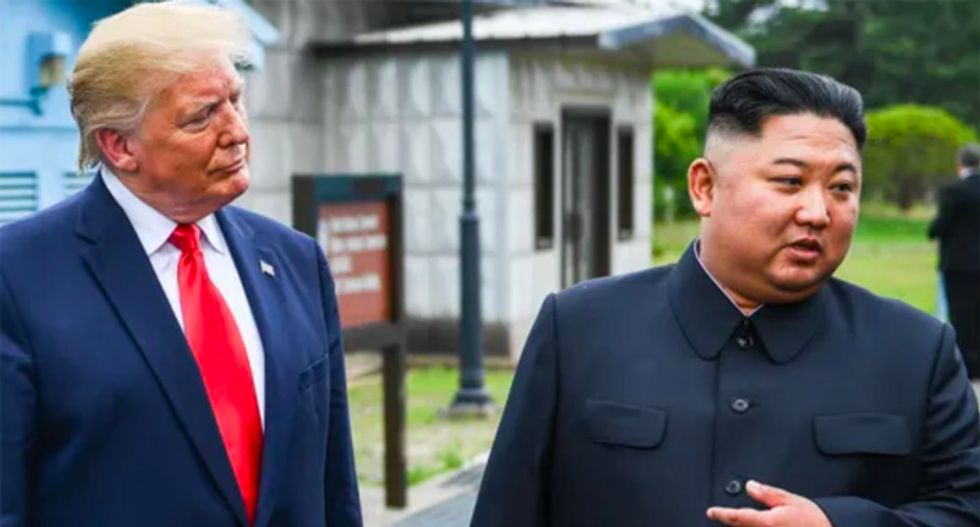 Sunday, President Donald Trump became the first sitting U.S. President to take the hand of a dictator and cross into North Korea. While it may have been a big step for Trump, conservative Washington Post columnist Max Boot said that the American leader is on the "road to nowhere."

Boot compared Sunday's event as a kind of reality show of international relations, where every move Trump made seemed staged for the best photos and videos.

"In truth, the 'historic' meeting at the DMZ was symbolism utterly devoid of substance," Boot wrote. "It was a photo op. That's it. The only agreement was to resume lower-level talks — you know, the ones that should have been going on for the past year. But those negotiations are likely to prove a road to nowhere."

There have thus far been two summits between North Korea and the United States. One the U.S. mapped out a big dinner and celebration with a formal signing of a treaty. It was quickly canceled, and all parties went home when it became apparent that North Korea had no interest in signing a treaty.

"If Kim has made anything clear in the past year, it is that he has no interest in denuclearizing — and why should he?" Boot asked. "He has seen what happened to leaders such as Saddam Hussein and Moammar Gaddafi, who gave up their weapons of mass destruction, and he has no desire to emulate their sorry examples."

Boot said it's clear that Kim would prefer a relaxation of the sanctions if he agrees to shut down one of the missile sites. Trump, however, refuses to give in, desperately seeking some kind of proof he's taken seriously on the international stage. Give the laundry list of broken promises in domestic policy; Trump needs a win as his 2020 reelection campaign kicks off.

"But 'complete, verifiable, irreversible denuclearization' is no longer on the table — and that phrase is no longer heard from any administration official," Boot noted. "Instead, North Korea is achieving its goal of being accepted as a nuclear-weapons power."

Meanwhile, meetings between the two leaders have been more of a roadblock than helpful for a deal. According to Boot, Kim "has realized that Trump is far more pliable — and gullible — than any of his aides." They complain of the newly reignited missiles tests, but Trump doesn't care.

"He is all too happy to enhance Kim's legitimacy in return for, essentially, nothing. So the lesson for Kim is to ignore Trump's subordinates and go straight to the big man himself. Which he just did again," Boot closed. "This makes for a great reality show but lousy diplomacy."