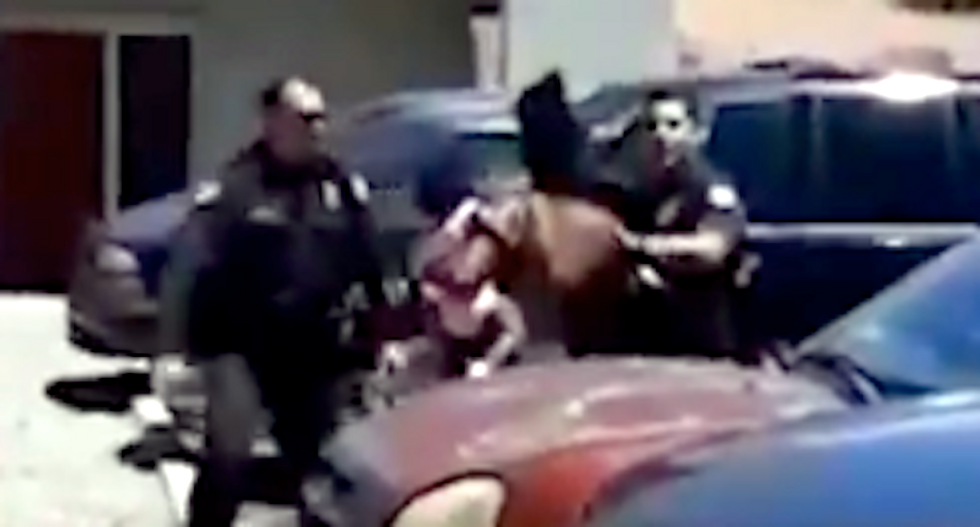 An Arizona family claims "trigger-happy" police threatened to shoot them after their 4-year-old daughter walked out of a dollar store with a Barbie doll they hadn't paid for -- without the parents' knowledge.

Officers responded to the shoplifting report May 29 involving a man and woman with two small children as they drove away from a Phoenix store, reported KSAZ-TV.

"It was crazy, very scary over a dollar store," said mother Iesha Harper. "I would have bought that doll had I knew."

Video released this week by police show officers approach the family and order them out of their vehicle in a parking lot.

Harper tells officers she cannot open the door because it doesn't work properly and she is holding her children, and one of them threatens to shoot her.

"You're going to f*cking get shot!" he shouts, pointing a gun at the vehicle. "Are you f*cking deaf? Get out the f*cking car!"

The woman begs the officer not to point his weapon at her children, and he tells her he doesn't "give a sh*t" in video recorded by a bystander.

Another officers escorts the man from the car to a police cruiser, where he roughly places him in handcuffs.

"Feet, spread your feet!" the officer barks. "When I tell you to do something, you f*cking do it."

The man, Dravon Ames, apologizes with his feet spread, as the officers twists his hands behind his back, and the officer asks what they did wrong.

"I didn't do anything, sir," Ames insists.

The other officer points his weapon inches away from Harper's face, and waves it around as he continues barking at her.

"I tell you to put your f*cking hands up, you put your hands up," he shouts.

The woman shouts back that she had a baby in her arms and couldn't put her hands up, and a second officer places his hands on her -- which caused the bystander to tell him to calm down.

The officers order Harper to set her child down in the parking lot, but she says the girl is a baby and cannot walk yet.

She is then walked by both officers over to the police vehicle without her child, but the video does not show where Harper placed the baby.

"He just seemed like he was trigger happy," Ames said afterward. "He wanted to shoot someone that day."

The family is planning a $10 million civil rights lawsuit against the city.

Their attorney said the officers dislocated the 1-year-old's arm in the incident, which resulted in no charges, and caused Ames to miss a day of work because they impounded his car.

Their claim says the store didn't report the theft, but officers instead responded based on allegations from an anonymous witness.