What do 11-year-olds think about Brexit? I asked – and they didn’t hold back 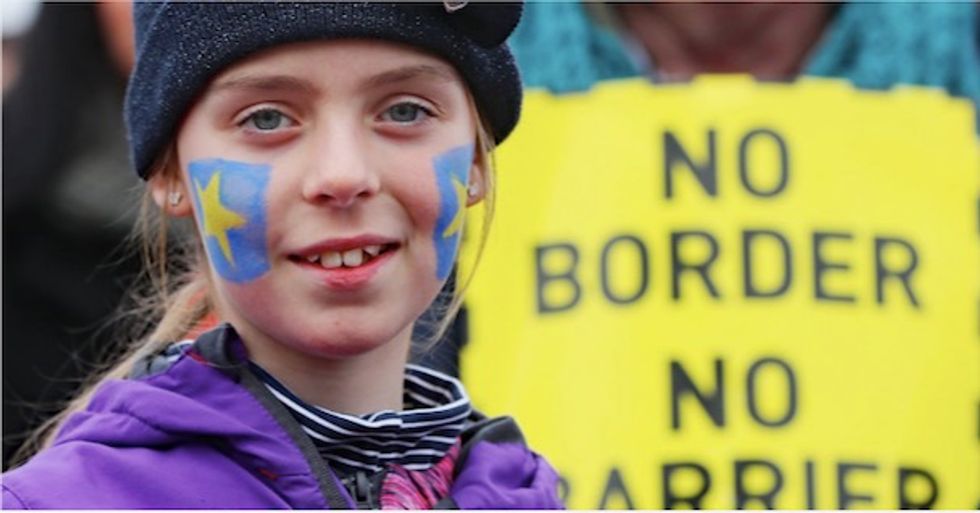 Brexit has been a seismic event in UK politics, but its real implications will be felt most by future generations of children. Once the immediate political drama is over, it is today’s young people who will live in the new reality of life outside the European Union. Yet this is the very section of society excluded from the political process.

Arguably, given the troubled history of Northern Ireland – and the fact that it is the site of the only land border with the EU – the impact of Brexit may be most strongly felt by children there.

So to find out what children in Northern Ireland really think about politicians, politics and Brexit, I asked 2,678 ten- and 11-year-olds. They made their feelings very clear.

Politicians aren’t known for being much good.

Brexit was mentioned 270 times in written responses – often followed by an exclamation mark. Like adults, children seem fed up with this never ending story. “They’re only talking about Brexit,” said one. “All they do is whine about Brexit, Brexit and more Brexit,” added another.

Some children did acknowledge, though, that this is a complex issue and thought that the politicians were doing their best: “I think our politicians are doing a good job because Brexit is very tricky but they are keeping it together and trying to work out a deal”.

Are they doing a good job?

While Brexit, and UK politicians such as Theresa May were mentioned often, many of the children focused on local politics in Northern Ireland. They are clearly aware that there is currently no government in the devolved assembly at Stormont and some are scathing about this:

They are not going to Stormont at the minute and are being paid for nothing.

They are not doing a good job in Stormont because we have been without an executive for nearly two years.

They are not [doing a good job] because there is no one working in Stormont and all the parties are disagreeing so nothing is being done and the country is not being looked after properly.

A number of children were concerned about the thorny issue of the “backstop” and Brexit’s potential impact on Northern Ireland based on the fragile peace process that has been in place since the signing of the Good Friday Agreement in 1998.

During the 30 years of the Troubles, which started in 1968, the border between Northern Ireland and the Republic of Ireland was manned by British soldiers who were targeted by nationalist paramilitary groups such as the Irish Republican Army (IRA). Recent paramilitary attacks by the “New IRA”, one of which resulted in the murder of journalist Lyra McKee in Derry/Londonderry in April, have ignited fears that reinstating a hard border will result in a resurgence of violence in Northern Ireland. This is something the children are clearly picking up on, as demonstrated by some of their comments.

While everyone’s talking about Brexit I always hear the words Northern Ireland border so please politicians fix this border issue, stop this new IRA whatever that is and please try and stop those paramilitary people.

They are not doing a good job because of Brexit and I think this will cause a hard border between the south and the north of Ireland, basically resulting in a troubles once again.

They want to get out of Europe which is the dumbest thing I heard and I’m very angry.

They do not do a good job because they are not accepting Brexit.

Interestingly, those who supported Brexit were more likely to think politicians were doing a good job when compared with those who thought leaving the EU was a bad idea (28% and 12% respectively).

The survey results show that many ten and 11-year-olds in Northern Ireland have a high level of interest in, and understanding of, local and international political issues. When given the opportunity, they are willing and able to express their views. Article 12 of the UN Convention on the Rights of the Child sets out the right of the child to have a say in matters that affect them – and this clearly applies to politics and Brexit. That many children feel this way is exemplified by the following quotes from our survey respondents:

I feel like I should have a voice as well as the other millions of people.

They are not letting us children decide on our future. We are the ones living it.

Given that children cannot vote, we need to find ways of ensuring that their voices are heard and taken note of. It is particularly sobering that many of the children taking part in my research are fearful of a return to violence in Northern Ireland. This should act as a wake-up call for politicians to work together to ensure that this does not happen.