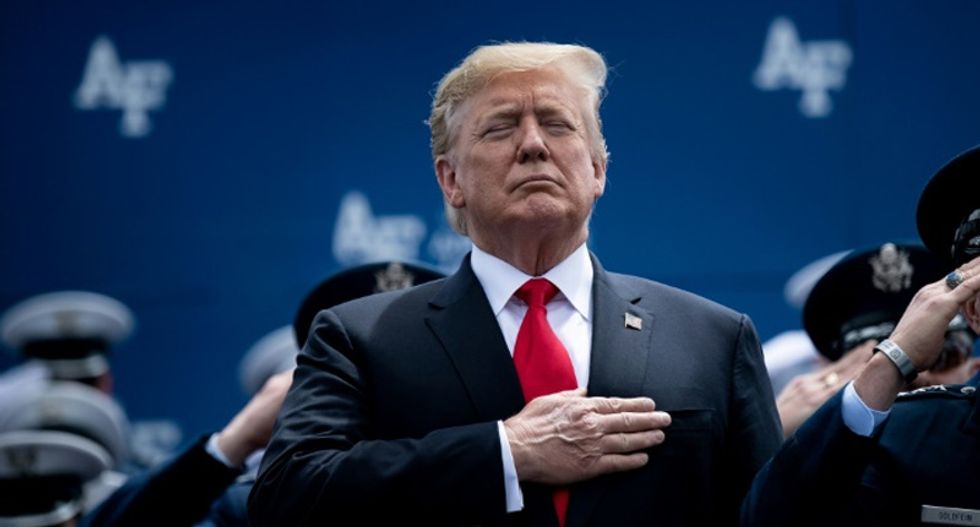 On Monday, President Donald Trump declared victory in his trade war with Mexico, claiming that his threat to raise tariffs is forcing the country to stop the flow of migrants across the border. He then turned his focus to China.

“The China deal’s going to work out,” Mr. Trump said on CNBC. “You know why? Because of tariffs. Because right now China is getting absolutely decimated by companies that are leaving China, going to other countries, including our own, because they don’t want to pay the tariffs.”

Trump's trade wars -- which have alarmed even his Republican backers -- present yet another example of the President's erratic behavior.

Raw Story spoke with Dr. Bandy X. Lee about the president's actions and what role mental health professionals might have in our current moment. Lee is a forensic psychiatrist and a renowned expert on violence at Yale School of Medicine, who has been consulting with the World Health Organization since 2002 and teaching at Yale Law School since 2003. She is author of the authoritative textbook, “Violence: An Interdisciplinary Approach to Causes, Consequences, and Cures,” president of the World Mental Health Coalition, and editor of the New York Times bestseller, “The Dangerous Case of Donald Trump: 37 Psychiatrists and Mental Health Experts Assess a President.” She and her coauthors recently prepared a definitive mental health analysis of the Mueller report, which is gathering signatures.

Raw Story: Do you think that the president’s mental state is deteriorating?

Dr. Bandy X. Lee: His state has been steadily deteriorating for some time, and we already started at a worrisome level. We have been trying to argue that “capacity” considerations have to happen at the same time as considerations of “criminality.” One does not exonerate from the other except in exceedingly rare cases, which do not apply to the president. Rather, both occurring at the same time make him more dangerous.

We already know that Mr. Trump has thought about how starting a war can be politically advantageous. “In order to get elected, @BarackObama will start a war with Iran,” he tweeted on November 29, 2011. “Now that Obama’s poll numbers are in tailspin—watch for him to launch a strike in Libya or Iran. He is desperate,” he tweeted on October 9, 2012. “I predict that President Obama will at some point attack Iran in order to save face!” he tweeted on September 16, 2013. What people assume about others often tells us a great deal about how they themselves think and operate.

He also without doubt noticed how George W. Bush, who was considered ineffectual and laughable, suddenly took on authority when a scared nation needed to rally behind a leader. These are the things individuals who lack capacity focus on above actual responsibilities. Real paranoia in a leader is also very effective in rallying a population, and that is why lay pundits continue to see him as “crazy like a fox,” not knowing that being “crazy” doesn’t mean you cannot be “effective as a fox.” Dangerous abnormality is especially important for mental health professionals to point out, for it is “effective” toward destruction.

Raw Story: George Conway tweeted about your book yesterday, saying it was one of “two great books discussing [the president’s] myriad psychiatric problems.” He astonishingly said, “Do yourself and the country a favor. Resign and seek the psychological treatment you so obviously need.” Do you agree?

Dr. Bandy X. Lee: Yes. My respect for George Conway has grown over time, and he is a graduate of Yale Law School! He says what needs to be said: “What’s astonishing is the media’s and the nation’s utter failure to confront the fact that we have a psychologically unwell and unfit president.”

What he is speaking about, the “bizarre, irrational, self-defeating behavior,” which triggers more such behavior with criticism, is the very definition of mental pathology, and his statement, “You would have been fired from any other job by now” summarizes our recent capacity evaluation. It is true that, if Mr. Trump were in any other job and were fired and filed in court, or if the court required testing before he could return to his job, we would have done the exact same testing—including the part about his refusing a personal exam—to discover that he fails every criterion for doing any job that requires rational decision making.

The media’s and the American Psychiatric Association’s roles were crucial: the New York Times explicitly shunned psychiatrists unless they were in the small handful willing to say the president is “just a jerk,” he “does not have narcissistic personality disorder,” or that psychiatrists have nothing to offer the public. CNN has an explicit policy not to publish mental health experts. The APA allowed others to discredit anything a mental health expert would say in the absence of a personal exam, even in preventive psychiatry or public health, where a personal exam does not even apply; the APA’s leadership even admitted it did so not to lose government funding.

Raw Story: Can you talk a bit about the Congressional town hall you are planning?

Dr. Bandy X. Lee: The reason we reconnected with Rep. John Yarmuth’s office is because a year and a half of waiting for Republicans to reach out produced no result. He was the one lawmaker who was once a Republican himself, spoke with Republicans, and came from a largely Republican state (Kentucky) where he has been successful for a long time. We needed a meeting of bipartisan Congress members to present our serious finding of incapacity, which we believe is as important—if not more—than criminality. I hope that Republicans will show concern over the importance of competence, as they should the rule of law.

Our definitive analysis shows that we have been right all along—including our judgment of choosing the side of safety over offending political relations. The APA can no longer claim this is “armchair psychiatry,” since the information in the Mueller report is exactly what we would look for in a capacity evaluation, not merely public documents, and here it is under sworn testimony. I think experts need to be thinking intellectuals who decide for themselves what is ethical in the face of difficult choices, and the public needs to have access to expertise—it should not be a mechanism for exclusion but a service. Knowledge empowers the public, and special knowledge can be important.

Raw Story: You have been exposed to a lot of attacks recently as the conservative media covered you.

Dr. Bandy X. Lee: They have tried to discredit us by framing the Congressional meeting as something “the Dems” are driving or by calling me a “resistance psychiatrist”—Rush Limbaugh even tried to say I am not a psychiatrist!—but it is important that we reach out to the segment of the population that does not wish to be persuaded. In treatment, you keep looking for opportunities to bring a resistant person or group back to reality. Reality can sometimes be difficult, but accepting it and applying justice or treatment accordingly, instead of cover-ups, is what makes real solutions possible.