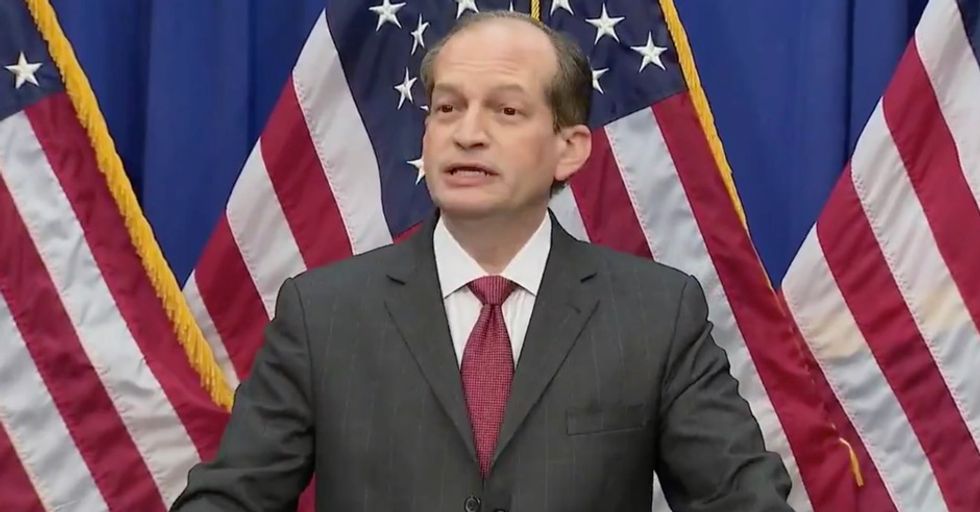 U.S. Secretary of Labor Alex Acosta on Wednesday was forced to hold a last-straw press conference in an attempt to save his job. Acosta was the federal prosecutor who handed child rapist Jeffrey Epstein a sweetheart non-prosecution agreement that allowed the billionaire to plead guilty to fewer and lesser charges. Had he been prosecuted to the fullest extent of the law some say he could have been jailed for life.

Secretary Acosta told reporters "Epstein would have gotten away" with no prison time had he and his office not stepped in. Framing himself as a hard-hitting prosecutor, Acosta says state officials who were prosecuting the case were ready to let Epstein walk.

But a just-published report at The Daily Beast tells a far different tale of what Acosta allegedly told the Trump transition team. Essentially, that Epstein was somehow protected by the intelligence community.

“Is the Epstein case going to cause a problem [for confirmation hearings]?” Acosta had been asked. Acosta had explained, breezily, apparently, that back in the day he’d had just one meeting on the Epstein case. He’d cut the non-prosecution deal with one of Epstein’s attorneys because he had “been told” to back off, that Epstein was above his pay grade. “I was told Epstein ‘belonged to intelligence’ and to leave it alone,” he told his interviewers in the Trump transition, who evidently thought that was a sufficient answer and went ahead and hired Acosta.

Video from the currently-ongoing press conference - will continue to update: