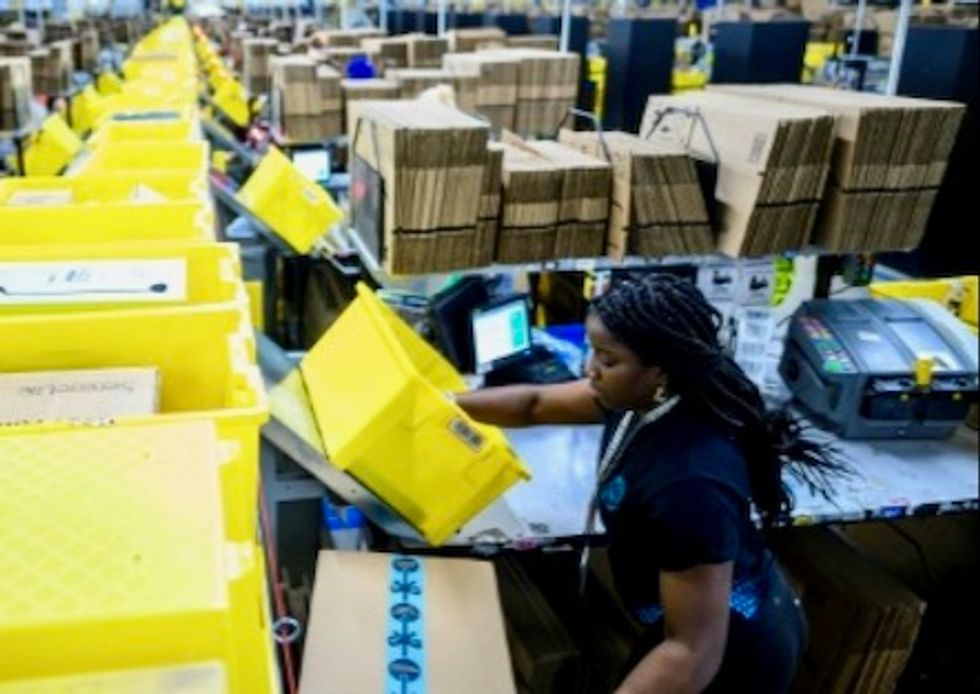 Workers are planning to walk off the job next week at an Amazon warehouse in Minnesota, which is one of numerous "fulfillment centers" operated by the company such as this one pictured from Staten Island, New York AFP/File

Amazon warehouse workers in Minnesota scheduled a walkout on Monday during the online giant's "Prime Day," to press demands on working conditions and job security.

The job action -- described as a six-hour strike -- is being organized by Awood Center, which works with east African immigrants in the midwestern state, according to a statement on the group's Facebook page.

The center said the Amazon warehouse employees in the suburb of Shakopee "were the first to ever sit down and discuss working conditions with Amazon management."

Meg Brady, a warehouse worker participating in the job action, said she expected some 100 of the estimated 1,500 employees to walk off, and noted that key issues include workplace ergonomics and job security.

"The work is very repetitive and leads to injuries, and Amazon hasn't made investments in their workstations," Brady told AFP.

Brady said the warehouse includes many temporary workers and that employees may be dismissed arbitrarily.

"You can have a bad day or a pain in the back and a manager can come up and say, 'You're done,'" she said.

The Awood Center statement added that these employees "are still struggling to make these critical jobs ones that are safe, reliable and where the majority East African workforce is respected and promoted to leadership positions."

An Amazon spokeswoman disputed claims by the organizers that most of the jobs were "unstable."

"On average, 90 percent of Amazon associates at the Shakopee fulfillment center are full-time Amazon employed," the spokeswoman said in an email.

"Year-to-date, over 100 temporary associates have converted to full-time Amazon positions. Just this last week, more than 30 were offered Amazon roles."

The statement added that Amazon "offers already what this outside organization is asking for -- we provide great employment opportunities with excellent pay -- ranging from $16.25 to $20.80 an hour, and comprehensive benefits ... we encourage anyone to compare our pay, benefits and workplace to other retailers and major employers in the Shakopee community and across the country."

The job action comes on one of Amazon's most important days for retail -- marked by big promotions and a concert by Taylor Swift -- to draw attention to its Prime membership program.

The walkout will be followed by a rally joined by Amazon workers from Seattle, according to the Awood Center.