As Trump tweets more racism on his way to 'pay respect' to Justice Stevens, Ilhan Omar calls for cancelling student debt in US 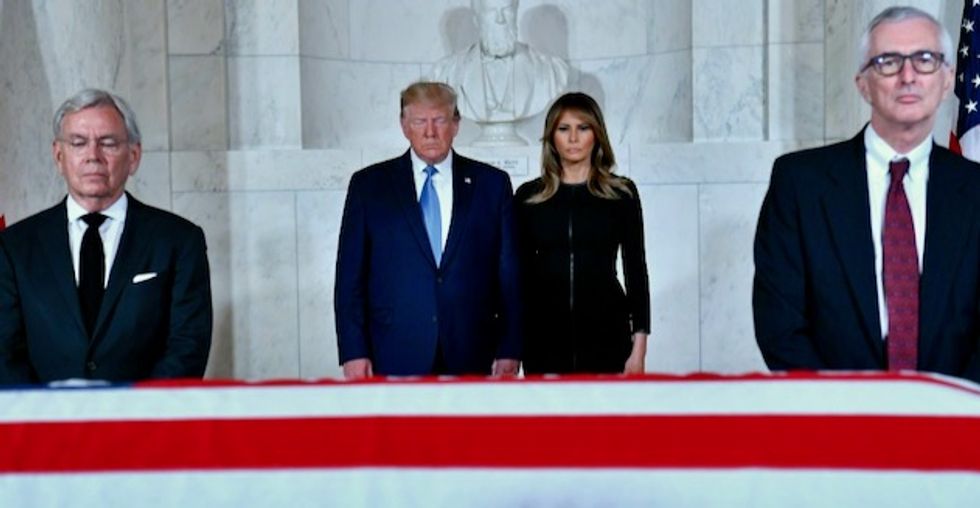 "Trump continues to foment hate and racism that is endangering the lives of women of color in Congress and so many others. We all need to call it out. And it must end NOW."

On his way to visit the casket of former Supreme Court Justice John Paul Stevens—lying in repose at the U.S. Supreme Court following his death last week—President Donald Trump on Monday took the time during the short trip to the courthouse to call four members of Congress "a very Racist group of troublemakers who are young, inexperienced, and not very smart."

The comment—directed at Reps. Alexandria Ocasio-Cortez, Ilhan Omar, Ayanna Pressley, and Rashida Tlaib, collectively known as "the Squad"—is just the latest racist attack by the president against the four freshman lawmakers who all happen to be women of color.

"Going with First Lady to pay our respects to Justice Stevens. Leaving now!" tweeted at 10:32 am EST. Just sixteen minutes later, at 10:48 am, Trump tweeted his attack on the lawmakers. And moments later, at 11:05 am, he appeared with First Lady Melania Trump at the service for Stevens.

Meanwhile, as Trump tweeted his latest vitriol, Rep. Omar took to Twitter shortly after to press the substantive case for ending student debt:

The members of "the Squad" have specifically said it is important that people "don't take the bait" when it comes to Trump's racist attacks. Instead of being distracted by the president's divisive and hateful comments, they have said, their goal will be to make sure that the bold and progressive solutions to the nation's most pressing issues remain front and center.