Barry now a hurricane as it approaches Louisiana coast 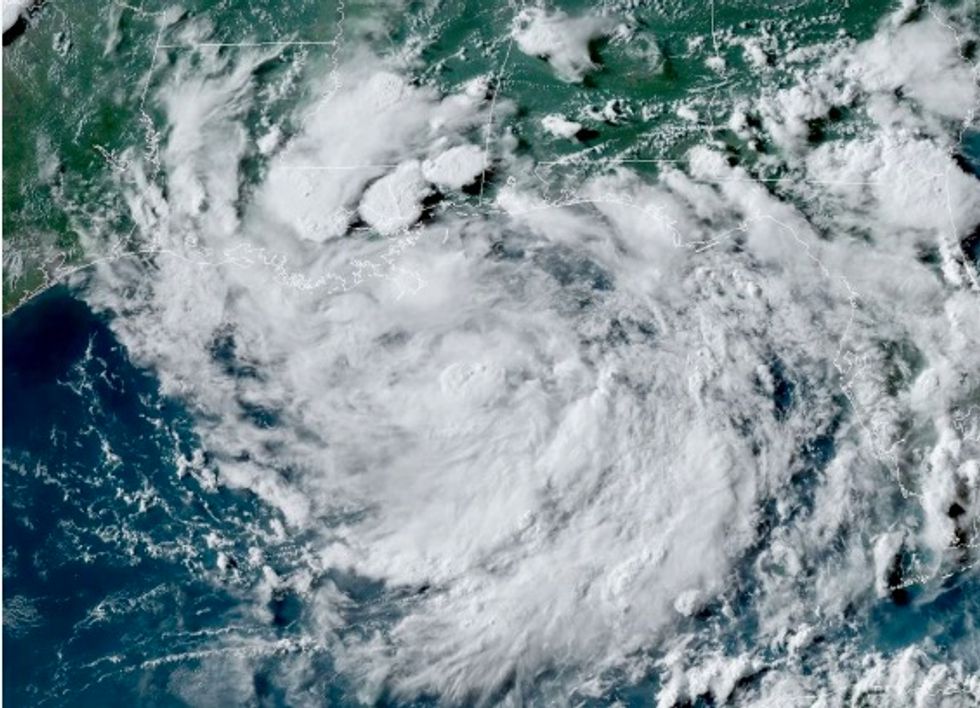 A satellite image showing the system that became Tropical Storm Barry forming in the Gulf of Mexico on Wednesday.CreditCreditJose Romero/Agence France-Presse

Barry strengthened into a category 1 hurricane on Saturday as it neared the Louisiana coast, US meteorologists said -- prompting millions of residents of the southern US state to hunker down for expected major flooding.

At 10:00 am (1500 GMT), the storm was packing sustained winds of 75 miles (120 kilometers) per hour -- just above the minimum to qualify as a category 1 hurricane on the Saffir-Simpson scale, the National Hurricane Center (NHC) said in its latest storm advisory.

The eye of the storm was located about 50 miles from Morgan City, to the west of the state's biggest city New Orleans, and moving at a slow pace of six miles an hour -- meaning that landfall could still be hours away.

But the outside edge of the storm was already punishing the US Gulf Coast with heavy rains. Authorities ramped up evacuations, airlines canceled flights and flood gates were slammed shut.

In Morgan City, the streets were deserted. The Atchafalaya River had flooded its banks, and trees were already blown over in residential areas.

"It's painstakingly slow," government meteorologist Ben Schott told CNN, noting that residents should not be lulled into complacency about facing the storm.

AFP / Seth HERALD Sandbags line a storefront in Morgan City, to the west of New Orleans, where Barry could make landfall

"If you don't have to go anywhere, stay home. Monitor what's going on. Do not put yourself at risk."

With Barry dumping rain across several southern states, federal emergency declarations were issued to help free up resources to address the storm.

Governor John Bel Edwards said New Orleans was well prepared to withstand the storm, the first hurricane of the Atlantic season, but urged vigilance by residents across the state, tens of thousands of whom had lost power.

"No one should take this storm lightly," Edwards said on Twitter.

NHC Director Ken Graham warned of the potential for inland flooding: "It's not just a coastal event."

For many, the large storm swirling in the Gulf of Mexico and the potential for large-scale flooding in coastal and river areas has brought with it unpleasant memories of 2005's deadly Hurricane Katrina.

Thousands have packed up and left their homes as floodwaters hit low-lying areas like Plaquemines Parish, where road closures left some communities isolated.

Some nevertheless hunkered down to ride out the storm, despite mandatory evacuation orders.

"We've stayed for some pretty strong storms and we shouldn't have," admitted Keith Delahoussaye, a 60-year-old mechanic, at his trailer home in Port Sulphur.

He was keeping a close eye on the nearby Mississippi River.

"If we see the water rising here, we'll leave," he said.

In New Orleans, residents and business owners were laying down sandbags and boarding up windows while city officials set up shelters for residents.

But local revelers and tourists drank "hurricane" cocktails and sang arm in arm as they walked down Bourbon Street late Friday.

On Saturday, Mayor LaToya Cantrell again urged caution, saying: "A lot of the rain won't happen until after landfall."

AFP / Seth HERALD Traffic lights are out as parts of Morgan City, Louisiana lost power in the storm

River levels are expected to peak at just over 17 feet, according to Saturday's forecast by the National Oceanic and Atmospheric Administration (NOAA).

US Senator Bill Cassidy said officials with the Army Corps of Engineers told him they were "confident" that the 20-foot-high levee system protecting New Orleans, a city of 400,000, would hold.

Storm surges of up to six feet are projected, and 10 to 20 inches (25 to 50 centimeters) of rain are forecast.

Mike Yenni, president of Jefferson Parish near New Orleans, said the community had taken the "unprecedented" step of closing hundreds of flood gates, largely due to the high levels of the Mississippi.

Authorities closed highways in several locations along the coast as floodwaters began creeping in.

In St. John's Parish next to New Orleans, some communities were already under two or more feet of water, local television footage showed.

In 2005, Katrina -- the costliest and deadliest hurricane in recent US history -- submerged about 80 percent of New Orleans, causing some 1,800 deaths and more than $150 billion in damage.

The city's main sports arena, the Superdome, was turned into an emergency shelter during Katrina.

The facility was due to host a concert by the Rolling Stones on Sunday, but it was postponed by a day due to Barry.