Bill Barr’s snide, sycophantic and self-righteous attack on the media told us everything we need to know about him 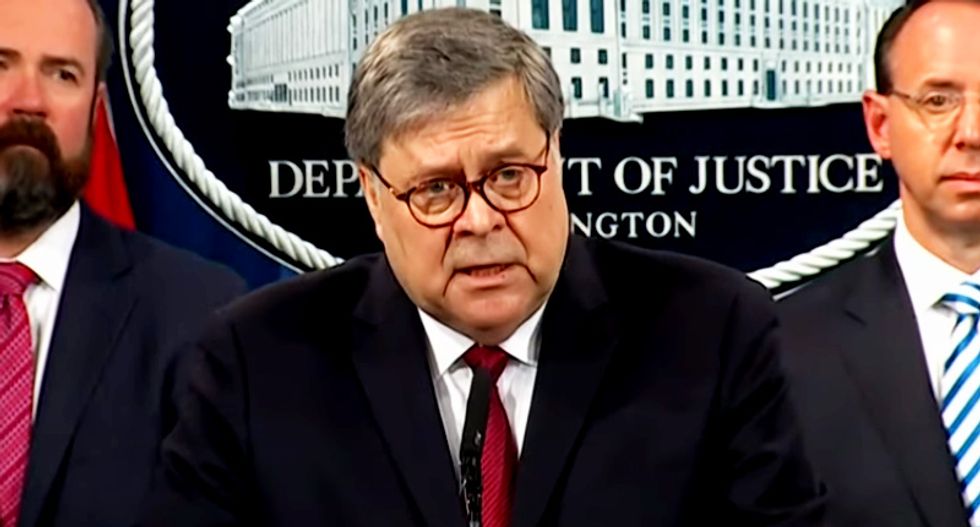 When President Donald Trump stood up in the Rose Garden on Thursday to claim he was victorious in the Census fight even while surrendering, he was flanked by two of his top deputies. Commerce Secretary Wilbur Ross, who is largely responsible for the administration's failed attempt to add a citizenship question to the 2020 survey, remained silent throughout the event.

But Attorney General Bill Barr got his turn at the lectern and used his time to revel in the tatters of his own credibility.

Perhaps most audaciously, he offered "congratulations" to Trump on the failure of the Census gambit, engaging in the humiliating pretense that the president's new executive order to directing the administration to find alternatives to calculating the number of citizens wasn't an option he could have taken a year and a half ago — and avoided this entire fight.

Let's be clear: Trump utterly failed, and Barr congratulated him for it. This is pure sycophancy.

But it only got worse from there.

Barr tried to claim that the Supreme Court's decision blocking the citizenship question was actually a vindication for the administration because it found the question "would be perfectly lawful." Of course, "would be" is the key point here. Few have argued that including a citizenship question couldn't be legal under some circumstances, just that the way the Trump administration went about it and tried to defend it — not to mention the reasons it had for this move — rendered the act unlawful. In other words, Barr was admitting that a more competent administration could have successfully added the question, but this one couldn't.

"Put simply, the impediment was a logistical impediment, not a legal one," Barr asserted.

Barr's next point was really his most outrageous. Indeed, it was blatant gaslighting.

"Some in the media have been suggesting in the hysterical mode of the day that the administration has been planning to add the citizenship question to the Census by executive fiat without regard to contrary court orders or what the Supreme Court might say," Barr said. "This has been based on rank speculation and nothing more. As should be obvious, this has never been under consideration. We have already accepted that any new decision to add a citizenship question to the Census would be subject to judicial review."

The idea that these fears were based on "rank speculation and nothing more" is ridiculous and insulting. There were multiple reports that cited administration officials conveying plans for such an idea, and even if these sources were wrong, they're more than "rank speculation."

More to the point, though, Trump and Barr's own public comments suggested they were considering the executive fiat route.

Trump, for instance, tweeted after the Supreme Court ruled and his own administration said publicly that the citizenship question wouldn't be on the Census: "The News Reports about the Department of Commerce dropping its quest to put the Citizenship Question on the Census is incorrect or, to state it differently, FAKE! We are absolutely moving forward, as we must, because of the importance of the answer to this question."

When asked by CNN's Kaitlan Collins last Friday if he was considering an executive order to put the question back on the Census, Trump said he was.

“We’re thinking about doing that. It’s one of the ways; we have four or five ways we can do it. It’s one of the ways that we’re thinking about doing it very seriously,” he said. "We could also add an addition on so we can start the printing now and maybe do an addendum after we get a positive decision. So we’re working on a lot of things, including an executive order.”

And Barr himself said Monday: "I think, over the next day or two, you’ll see what approach we’re taking and I think it does provide a pathway for getting the question on the census.”

Barr also told the Associated Press that the Supreme Court decision was "wrong" and that he believes there is “an opportunity potentially to cure the lack of clarity that was the problem and we might as well take a shot at doing that."

But as Barr himself admitted on Thursday at the press conference: "As a practical matter, the Supreme Court's decision closed all paths to adding the question to the 2020 Census."

So Barr now admits that adding the question in a legal way was practically possible, even though just a few days ago he was saying that he was considering taking "a shot at doing that." But he also thinks the media commentators who, apparently understanding the situation better than the attorney general, interpreted Barr and Trump's comments to suggest they might be willing to defy the courts, were "hysterical."

The best defense of Barr and Trump is that they've just been rambling along this whole time, not entirely sure what they were doing. More likely, they're intentionally gaslighting their critics while trying to ensure they're supporters that they're winners when they've actually suffered near-total defeat.