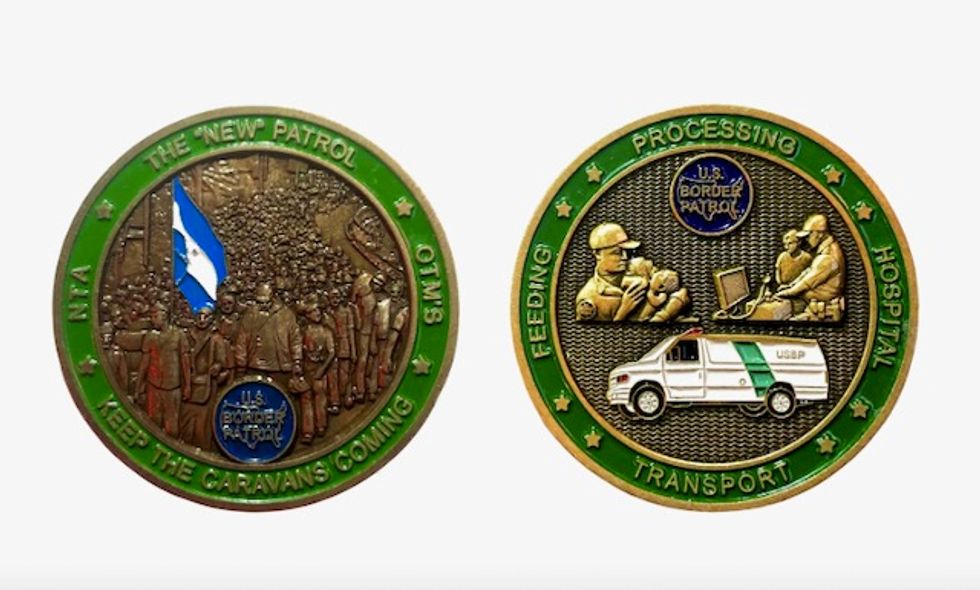 Keep The Caravans Coming The front of the coin, left, and the back. (Dara Lind/ProPublica)

An unofficial commemorative coin has been circulating among Border Patrol agents at the U.S./Mexico border, mocking the task of caring for migrant children and other duties that have fallen to agents as families cross into the U.S.

On the front, the coin declares “KEEP THE CARAVANS COMING” under an image of a massive parade of people carrying a Honduran flag — a caricature of the “caravan” from last fall, which started in Honduras and attracted thousands of people as it moved north. (While the caravan included many women and children, the only visible figures on the coin appear to be adult men.)

The coin’s reverse side features the Border Patrol logo and three illustrations: a Border Patrol agent bottle-feeding an infant; an agent fingerprinting a teen boy wearing a backwards baseball cap; and a U.S. Border Patrol van. The text along the edge reads “FEEDING ** PROCESSING ** HOSPITAL ** TRANSPORT.”

The coin appears to poke fun at the fact that many border agents are no longer out patrolling and instead are now caring for and processing migrants — including families and children.

Government officials told ProPublica the coin was not approved or paid for by the government, unlike official “challenge coins” that go through an agency approval process. One Customs and Border Protection official, who was not authorized to give his name, characterized the coin as “something that somebody’s doing on their free time” — comparing it to woodworking. “A lot of the agents have little hobbies on the side, they build little wooden figures that they have at their homes,” the official said.

It’s not clear who created the coin or how widely it’s been circulated among border agents. But Border Patrol agents in California and Texas — on opposite ends of the U.S./Mexico border — had seen the coin circulated at their workplaces. One of the agents received a coin in April when a colleague brought several to pass around at the office; the other was shown an online order form for the coins by a colleague at work.

Both said the coins were promoted via the secret Facebook group for current and former Border Patrol officials that, as ProPublica recently detailed, included racist and violent posts.

The coin is part of a tradition of unofficial “challenge coins” — which generally outnumber official ones — which are common in the military and law enforcement as a way for members to celebrate achievements and build camaraderie.

But outside observers found this particular coin anything but harmless.

Theresa Cardinal Brown, who worked at CBP under the Bush and Obama administrations, said that the coin was evidence (like the 10-15 Facebook group) of “reflexive dehumanization” by Border Patrol agents, and that the “tolerance for shenanigans” by supervisors and leadership had gone too far. “You have to say, ‘This is affecting the integrity and authority of us all.’”

The coin appears to have been designed, ordered and distributed months into the surge of Central American families at the border. Coins were being distributed to agents by late April, before the current wave of public attention and outrage over conditions for migrants in Border Patrol custody. 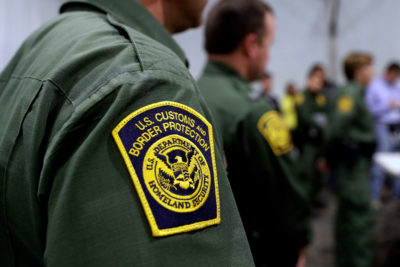 The three-year-old group, which has roughly 9,500 members, shared derogatory comments about Latina lawmakers who plan to visit a controversial Texas detention facility on Monday, calling them “scum buckets” and “hoes.”

Customs and Border Protection officials said they did not know about the coin until contacted by ProPublica. They said they would investigate it for potential trademark violation since the coin includes the Border Patrol’s logo.

“U.S. Customs and Border Protection (CBP) has a firm policy on the use and production of challenge coins bearing CBP identifiers,” a CBP official said, including the U,S. Border Patrol logo. “The coin in question is not an officially approved CBP coin. CBP intends to investigate the matter and will make a determination when all the facts are known.”

However, officials implied that if the coin had not used the official logo, it would be beyond their control. “If it’s something that somebody’s doing on their free time,” said the official who asked not to be named, it is not something the agency can control.

Hector Garza of the National Border Patrol Council, the union representing Border Patrol agents, said he had not seen the coin either. When shown pictures of it by ProPublica, and in response to follow-up questions, he said, “I have no thoughts about the coin.”

Challenge coins have spread throughout the federal government, but are especially popular within Border Patrol. They depict individual offices or stations or particular missions. If official visitors come by to tour a station, a coin may be presented.

In this case, the “mission” being mockingly commemorated is the unprecedented amount of migrant care and processing Border Patrol agents did in the spring of this year.

Taking care of migrants (including children) in short-term custody is part of the Border Patrol’s job. When the intake system for migrant children is overwhelmed, as it was in 2014 and has been again in 2019, Border Patrol often holds children for longer than the 72 hours prescribed by the federal Flores settlement (a court agreement that governs the treatment of children in immigration custody), often in spaces not designed for children — or anyone. In recent weeks the government has greatly reduced the number of children in Border Patrol custody, thanks in large part to funding from Congress that expanded the intake system’s capacity.

Some agents say that childcare and support have an opportunity cost: Any time an agent spends driving a van full of children to a child-only facility, for example, is time not spent “in the field” apprehending people who are trying to get away.

That tradeoff appears to be fueling the emotions expressed by the coin — with the back side depicting the tasks that agents must do instead of being out “on the line,” and the front side referring to the legal “loopholes” that make it harder to detain and deport migrants under 18 and families.

One Border Patrol agent, when asked about morale among agents detailed to care and transport, replied with a photo of a dumpster floating down a flooded river.

If you have any information about the Border Patrol you’d like to share, please email us at borderpatrol@propublica.org. For more secure ways to send us information, please see our instructions.