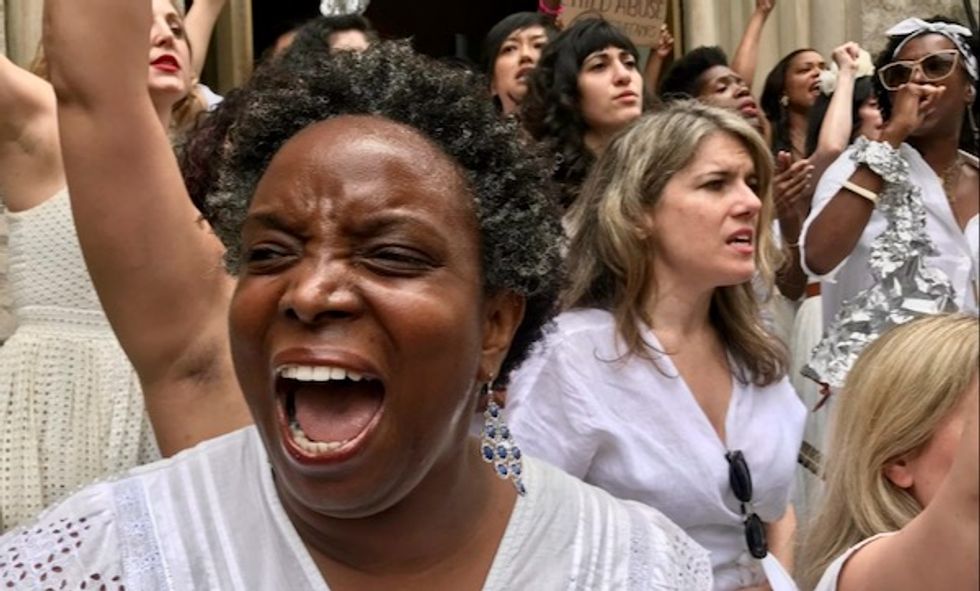 Simona Bua, FRANCE 24 | Protestor shouts 'close the camps' at protest in the East Village in NYC against the detention of immigrant children in the United States.

The angry crowd rallied along Seventh Avenue in front of the Middle Collegiate Church.

Reverend Jacqui Lewis, the senior minister of the church, used the building’s steps as a podium. She declared, “How dare anybody who claims to be Christian in the same breath close borders against people who need asylum? That's not Christian.”

Some of the protesters wrapped themselves in aluminum foil to symbolise those given to detained immigrants.

The rallies are in response to growing alarm in the United States about how the President Donald Trump’s government is treating detained migrant children.

Protesters have called on lawmakers to take action and to stop funding the US immigration authorities responsible for mistreating them.

“I’m so ashamed this is happening in our name and with our tax dollars. And we’re going to fix it,” she told FRANCE 24. “The difference this time with these concentration camps is that we’re standing up and we’re not going to let it happen.”

Henry Gibson, a 10-year-old from Astoria in Queens, came to the protest with a sign he had drawn himself. It showed Trump behind bars with a caption reading, "Look who’s behind bars now, prisoner No. 1, IQ 0."

“Me and my mum and sister are here because we feel what Trump is doing to kids at the border is inhumane and should not be tolerated,” he explained to FRANCE 24.

Henry Gibson holds up his handmade sign at #CloseTheCamps rally in East Village in NYC on July 2 2019.FRANCE 24

The protests were organised by public policy organisations like MoveOn, United We Dream, American Friends Service Committee and Families Belong Together. They have taken to social media to push for their cause under the hashtag #CloseTheCamps.

At least six migrant children have died in US custody since September, according to media reports.

The Associated Press reported in late June that the Clint Detention Centre in Texas was mistreating migrant children, leading to lawyers to visit Clint. The attorneys reported that older children were left responsible to try and take care of the infants and toddlers. They described a starving 4-year-old with matted hair and other hungry, inconsolable children struggling to soothe each other amidst the shocking conditions.

They reported that some of the children had been locked-up for three weeks inside, where 15 children were sick with the flu and another 10 in medical quarantine.

Organisers of Tuesday's protest told FRANCE 24 that larger #Closethecamps rallies are being planned for across the USA for July 12.

The protests were organised by public policy organisations like MoveOn, United We Dream, American Friends Service Committee and Families Belong Together. They have taken to social media to push for their cause under the hashtag #CloseTheCamps.