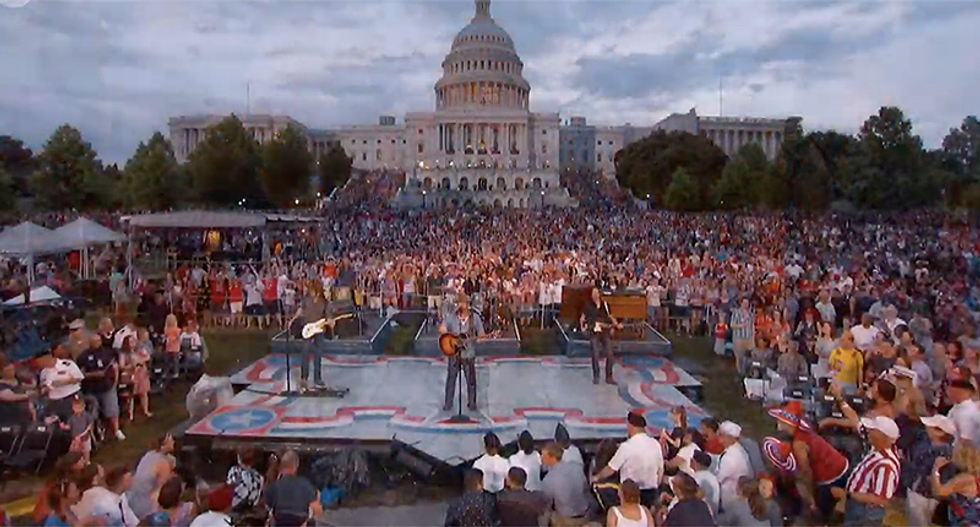 Half of the Capitol Hill Fourth of July concert (Photo: Screen capture)

President Donald Trump is already celebrating his rally speech on the steps of the Lincoln Memorial, but crowd size had one giant hole that differentiated it from the massive size on Capitol Hill: the reflecting pool.

Trump managed to fill up the sides of the memorial as the rest of Washington, DC gathered at different places on the mall.

At the U.S. Capitol, residents spilled out over the steps, around the pillars, out onto the capitol lawn and beyond. As Trump's crowd struggled to figure out when to clap, Capitol crowds held their phones up to guide a light for soldiers overseas on the American holiday.

As Trump's festivities closed out his crowd spilled onto the National Mall to add to those already seated to hear the Capitol concert.

You can compare the sizes of the crowds below:

A great crowd of tremendous Patriots this evening, all the way back to the Washington Monument! #SaluteToAmerica🇺🇸 https://t.co/nJghdfqIhX
— Donald J. Trump (@Donald J. Trump) 1562286487.0

"Each of these lights represent a million thanks to you and your families for your service and sacrifice. Thank you… https://t.co/4atKrzlQ3E
— A Capitol Fourth (@A Capitol Fourth) 1562287787.0

That's only half of the crowd size at the US Capitol.... looks a little bigger than @realDonaldTrump https://t.co/AfaYZFOWNq
— Sarah Burris (@Sarah Burris) 1562290081.0