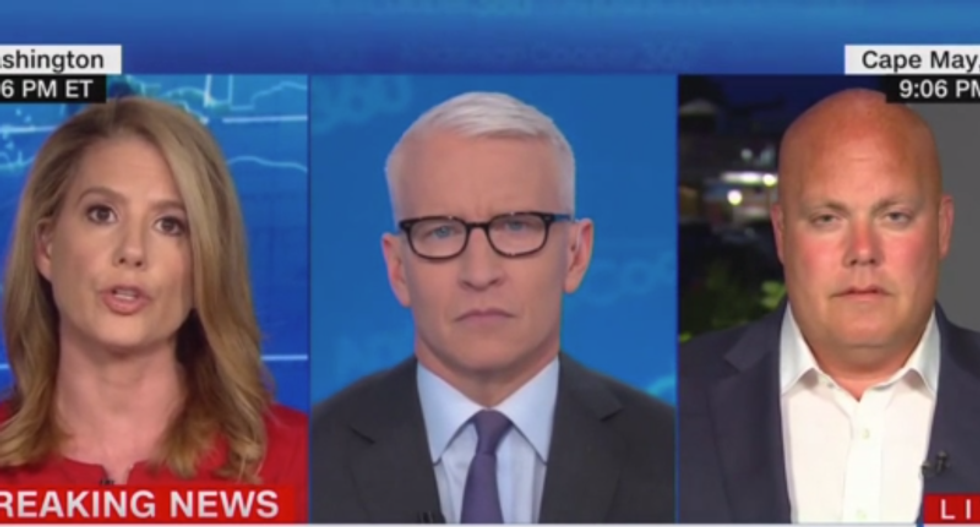 On Wednesday, in a spirited debate moderated by CNN's Anderson Cooper, former Trump White House lawyer Jim Schultz tried to defend the administration's decision to change the 2020 Census to ask about citizenship in the wake of the Supreme Court ruling against the plan — and commentator Kirsten Powers boxed him into a corner.

"Justice Alito said in this matter that the courts really had no basis to stick their nose in this issue and policy determinations that were made by the Commerce Secretary as it related to what questions are going to be included in the census," said Schultz. "And he didn't believe it was the court's place to be involved in that issue. And Roberts left the door open for there to be a change of course here or to supplement the rationale behind including that question in the census. So they're well within their legal authority to do so. So this whole idea that they're trying to scare people off I think is a wrong one here because the court clearly left open the ability for the administration to put forth its argument."

"The court also said that the argument the administration put forward was a phony argument," said Cooper. "That emails between the DOJ and Wilbur Ross put, you know — put that argument, basically proved it wrong."

"It's about underrepresenting communities of color," said Powers. "In large part, it's a power grab. It's an attempt to make sure that population numbers are lower so that there are fewer people who are represented. In this case they're people of color, and people of color who are maybe represented by Democrats. And so I think the point of it is to intimidate them out of participating in this, in one way or the other, whether it's the president doing what he's going now or adding this question so they can drive down the numbers."

"This isn't even a secret," she added. "This is something that the Republicans have been fairly open about wanting to do, so I don't know why you're acting so shocked by this."

" No. I think there's a fine point to be put on here," blustered Schultz. "Again, going back to the Alito dissent, that he said it was perfectly reasonable for a question — for the government to understand how many folks in this country are actually citizens."

"But John Roberts said the opposite," said Powers. "He said he thinks there's a cause for concern here regarding the rationale."

"No. He didn't say there's a cause for concern," said Schultz.

"It was reasonable to be concerned about the rationale and they needed to come back and come up with a better rationale. Are you saying that it is not part of — it is not being driven by the desire to drive down population numbers?" Powers pressed him. "Is that actually your position?"

"You're saying that like — that that's what you believe?" said Powers.

"But I'm not asking what the justices of the court said, I'm asking what you think," said Powers. "If we're looking at this, the Commerce Secretary set forth a rationale. Roberts didn't buy it."

"She's asking what you think," said Cooper. "Do you want to say what you think? Do you think this is about driving down reputation, particularly in communities of color?"

"I'm not in the rooms — I'm not sitting here — I'm a lawyer. I deal with facts and law," spluttered Schultz. "And in this case I'm not going to speculate what they're thinking and what their intentions are."

"I think it's telling that he will not answer the question directly," said Powers.