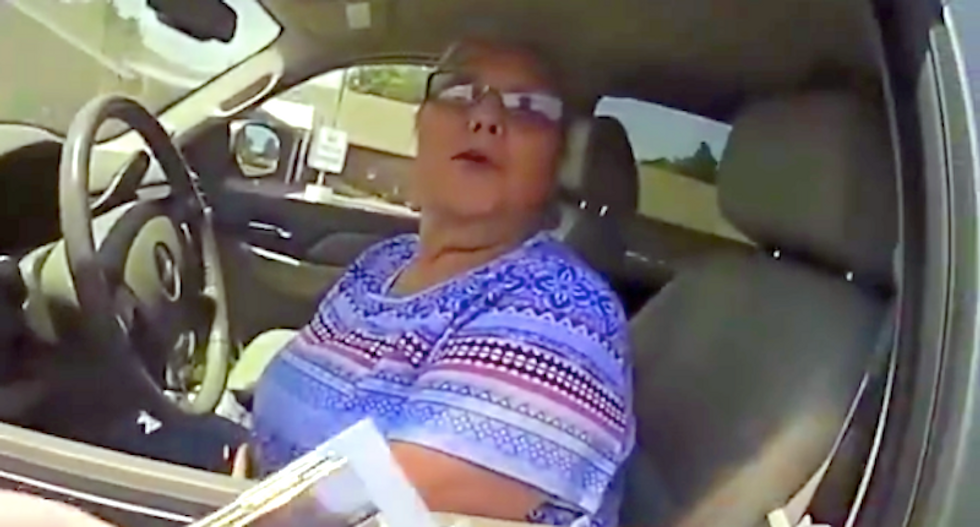 An Oklahoma woman was violently arrested after she refused to accept a traffic ticket -- and briefly led police on a chase.

The 65-year-old woman, identified as Debra Hamil, was stopped in a parking lot and issued a citation for a broken tail light, but she argued with the officer about the ticket's legitimacy, reported KOCO-TV.

"No, because I don't think that I deserve to pay $80 for something that is fixable, and I can fix it, that's all," Hamil says, according to body camera video of the incident.

The officer orders her to step out of the car, and Hamil asks why, and he tells her she's under arrest.

"No, I'm not," she says, rolling up her window and locking the doors.

"You are full of sh*t because you are not putting me under no f*cking arrest," she says.

Hamil makes a move to put the truck into gear, and the officer tells her not to, and then she tells him to hand over the ticket and she'll "f*cking sign it."

By that point, the officer won't allow her to sign the citation and drive away, saying "we're beyond that," and insists she get out of the truck to be arrested.

Hamil drives away, and the officer jogs to his patrol car and begins pursuit.

She stops a short time later in a parking lot as other patrol cars can be heard approaching in the background, and the officer points his weapon at the woman and again orders her from the pickup.

Hamil opens the door, and the officer pulls her -- kicking and screaming -- from the truck.

The officer uses a Taser during a brief struggle after the woman refuses to put her hands behind her back.

"I’m a country girl and no, I did not like to be thrown on the floor," she said. "I didn’t like being thrown to the goddamned ground.”

Hamil refused medical attention, but officers took her to a nearby hospital for assessment.

She was charged with one felony assault on a police officer and one misdemeanor for resisting arrest.