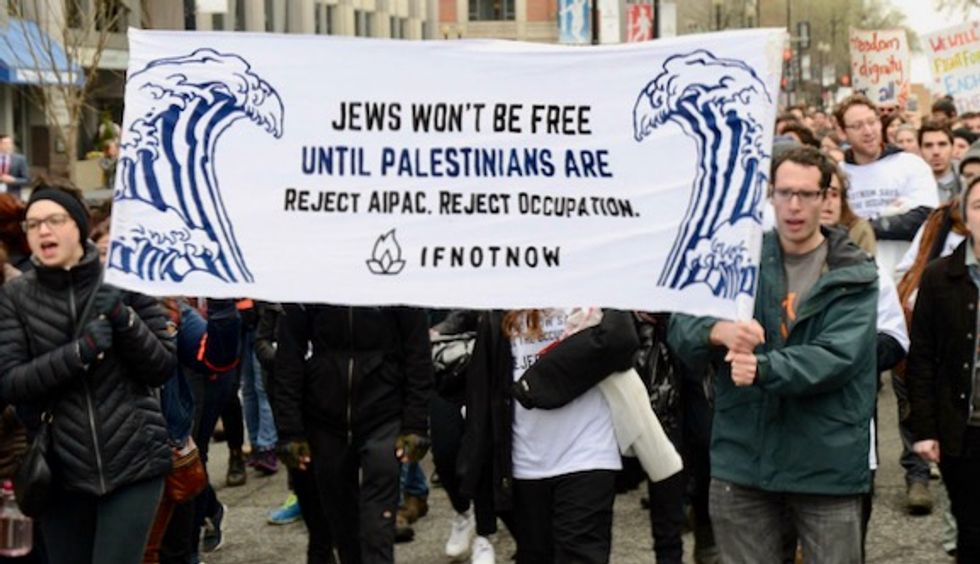 As Politico reported on Saturday, IfNotNow is "training organizers in the early primary state of New Hampshire" and "plans to 'bird-dog' presidential candidates at public events to create viral moments and prod the Democratic Party leftward on the issue of Israel." (Photo: IfNotNow)

"It is about time we realize the status quo is not working to bring peace to the region."

In an effort to pressure Democratic presidential candidates to take a stand against Israel's treatment of Palestinians, the youth-led progressive Jewish advocacy group IfNotNow has launched a new campaign arm with the goal of bringing Israel's brutal occupation "to the forefront of the 2020 elections."

As Politico reported on Saturday, IfNotNow is "training organizers in the early primary state of New Hampshire" and "plans to 'bird-dog' presidential candidates at public events to create viral moments and prod the Democratic Party leftward on the issue of Israel."

"In addition to pushing the candidates to adopt more progressive positions on Israel," according to Politico, "the group said it is hoping to draw public attention to the Democratic Party's changing attitudes on the topic and clarify candidates' stances on particular issues."

Sen. Bernie Sanders (I-Vt.) appears to have been the first 2020 presidential candidate confronted by IfNotNow members in New Hampshire. The group said the senator expressed support for their campaign.

"IfNotNow believes that the time is ripe to put Israel at the center of the primary debate," Politicoreported. "Only 26 percent of Democrats view the government of Israel favorably, according to a 2019 survey by the Pew Research Center."

In a series of tweets explaining the motivation behind the new campaign, IfNotNow organizer Emily Mayer said the group senses "an opportunity to break with the AIPAC-created status quo and push for a new politics within the Democratic Party."

"A generation of young Jews are horrified watching what is being done in our name," Mayer said. "The movement is there. It just needs to be activated. So let's go."

"It is about time we realize the status quo is not working to bring peace to the region," said Tlaib, who is planning to lead a congressional delegation to the occupied West Bank in August. "IfNotNow is one of the organizations that gives me hope that we are making progress towards a just and lasting peace."

Our work is licensed under a Creative Commons Attribution-Share Alike 3.0 License. Feel free to republish and share widely.
2020 Election Opinion
Report typos and corrections to: corrections@rawstory.com.
Like this article ? Text `Support` to 50123 to donate.
READ COMMENTS - JOIN THE DISCUSSION