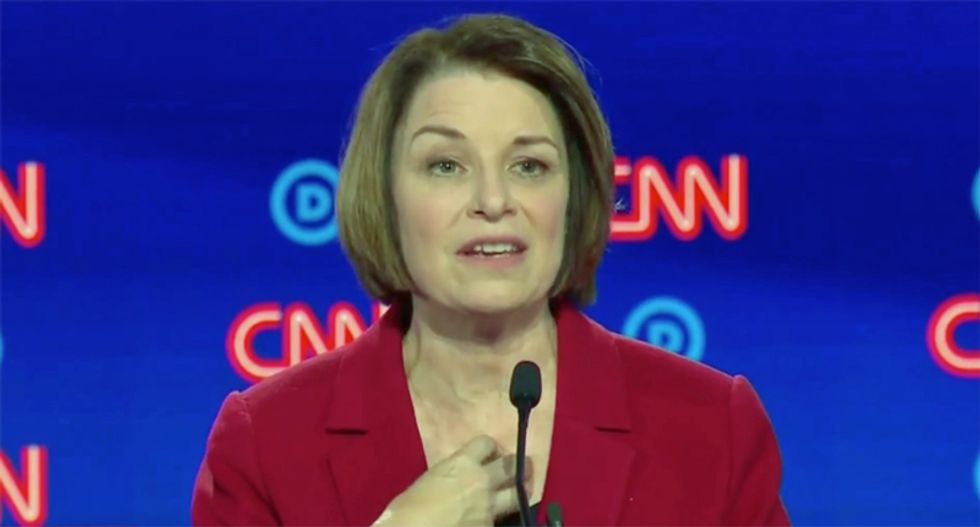 President Donald Trump's racism was harshly criticized by Democrats at the second presidential debate in Detroit, Michigan on Tuesday.

"Congressman [Beto] O’Rourke, President Trump is pursuing a reelection strategy based in part on racial division. How do you convince primary voters that you would be the best nominee to take on President Trump and heal the racial divide in America?" moderator Jake Tapper asked.

"We’ll call his racism out for what it is, and also talk about its consequences. It doesn’t just offend our sensibilities to hear him say send her back about a member of Congress because she’s a woman of color, because she’s a Muslim American, doesn’t just offend our sensibilities when he calls Mexican immigrants rapists or criminals and seeks to ban all Muslims from the shores of a country that is comprised of people from the world over, from every tradition of faith. It is also changing this country, hate crimes are on the rise every single one of the last three years," O'Rourke replied.

"We need to call out white supremacy for what it is -- domestic terrorism," Sen. Elizabeth Warren (D-MA) said. "And it poses a threat to the United States of America."

"Systemic racism has touched every part of American life from housing to health to homeownership. If you walk into an emergency room and you are black, your reports of pain will be taken less seriously. If you apply for a job and you are black, you are less likely to be called because of the name on the resume," South Bend Mayor Pete Buttigieg said.

Sen. Amy Klobuchar (D-WI) said, "There are people that voted for Donald Trump before that aren’t racist, they wanted a better shake in the economy and so I would appeal to them. But I don’t think anyone can justify what this president is doing. Little kids literally woke up this weekend, turned on the TV and saw their president calling their city the town of Baltimore nothing more than a home for rats."

"It is time for us to simply realize that this country will not heal -- all that a country is a collection of people -- people heal when there’s deep truth-telling," Marianne Williamson said. "We need to recognize when it comes to the economic gap between blacks and whites in America, it does come from a great injustice that has never been dealt with. That great injustice has had to do with the fact that there was 250 years of slavery followed by another hundred years of domestic terrorism."