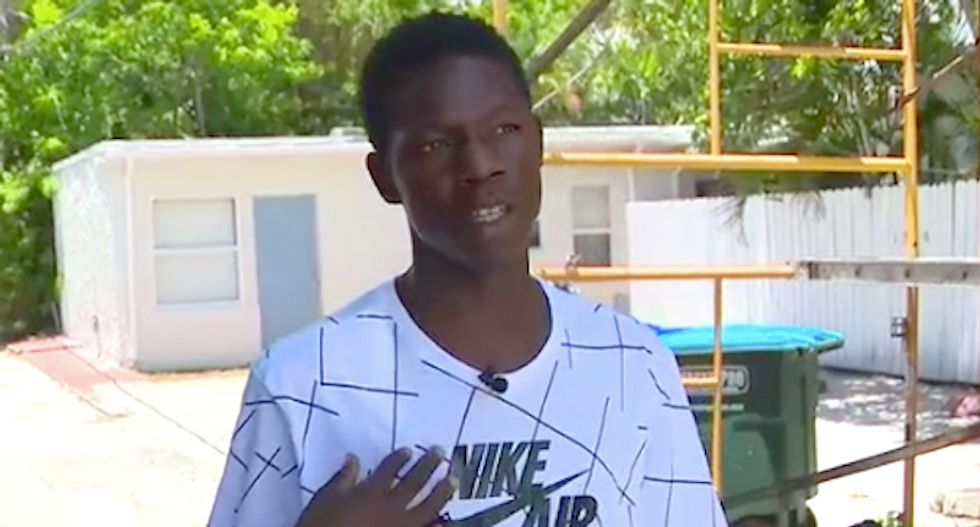 Florida police chased down a black teenager, struck his bicycle and then violently arrested him after he fled in terror.

Jaydon Stubbs and four friends were riding July 17 on their way to Hollywood Beach when an officer spotted the teens in an area where there had been a string of recent burglaries, reported WPLG-TV.

The officer saw the boys popping wheelies and ignoring traffic laws, so she tried to stop them for questioning -- but they split up and rode away from her.

The 15-year-old Jaydon was riding alone down an alley when an officer caught up to him, then sped up and hit the rear tire of his bicycle, causing him to fall.

"When he hit my bike, I fell sideways," the boy said. "So my bike went sideways because my whole wheel just got destroyed."

Jaydon said the crash scared him, so he felt he should keep running.

"If he hit me with his truck, Lord knows what else he would do," he told the TV station.

Officers caught up to Jaydon, and he said at least three of them jumped on him and kneed him in the back, and one officer ran up and shocked him with a Taser as another officer put him in handcuffs.

Jaydon's mother said she doesn't condone his actions, but she doesn't understand why so much force was used to take the teen into custody.

"(With) what's going on in the world today with these young black boys and the cops, you can't blame the children for being afraid of the police," said Ramona Miller.

The police report does not offer any details about his arrest or explain why a Taser was used, although it notes that he was taken to a hospital because of the stun gun.

Hollywood police would not turn over a supplemental report to the TV station, saying it was still under review.

Miller has filed an excessive force complaint with the police department.