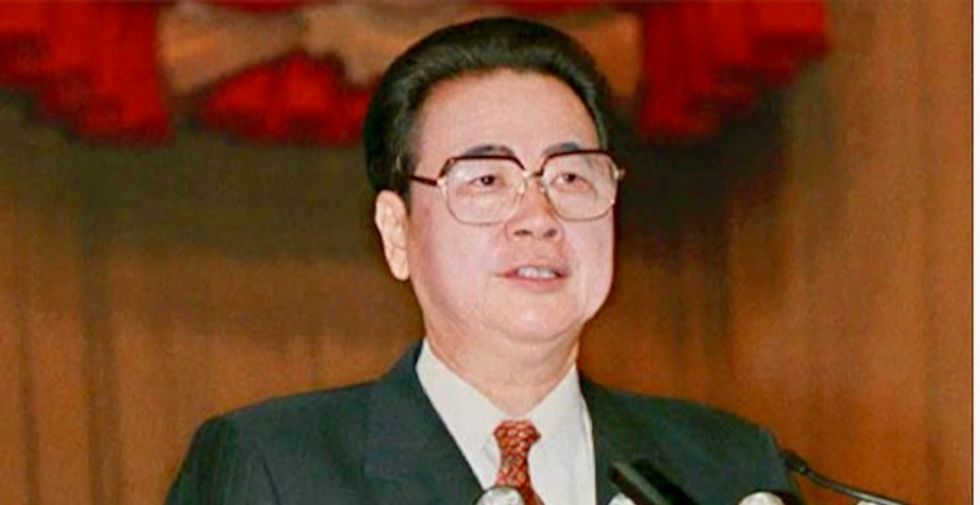 Former Chinese premier Li Peng -- known as the "Butcher of Beijing" for his role in the Tiananmen Square crackdown -- has died at the age of 90, state media said Tuesday.

Li died of an unspecified illness in Beijing after he failed to respond to medical treatment late Monday, the official Xinhua news agency said. The ex-premier had previously battled bladder cancer.

Li gained notoriety worldwide as one of the key architects of the brutal breakup of mass pro-democracy demonstrations in the capital on June 4, 1989, and stayed at the top of the Communist regime for more than a decade, while remaining a hated symbol of the repression until his death.

After vast crowds of students, workers and others had been encamped for weeks in Tiananmen Square to demand change, Li proclaimed martial law on May 20, 1989.

Two weeks later, on the night of June 3-4, the military put a bloody end to the protests, killing hundreds of unarmed civilians -- by some estimates more than 1,000.

Though the decision to send in the troops was a collective one, Li was widely held responsible for the bloody crackdown.

Its taint trailed him through to the end of his official political career in 2003, with his trips abroad generating widespread protests -- such as in Paris in 1996, where more than 2,000 took to the streets to decry his welcome by president Jacques Chirac.

Nevertheless, he remained a member of the elite Politburo Standing Committee for 15 years and for most of the 1990s ranked number two behind then Chinese president Jiang Zemin.

He held the premiership for 11 years until 1998, and was chairman of China's Communist-controlled parliament until 2003.

Li spent his childhood in the shadow of Zhou Enlai, China's premier for nearly three decades and possibly the Communist Party's most skilled politician.

Born in 1928 in the southwestern province of Sichuan, Li was adopted at the age of three by Zhou after his Communist father became a "martyr of the Revolution", killed by the Kuomintang in 1931.

He joined the Communist Party at the age of 17 and was dispatched to Moscow in 1948 for seven years of hydropower engineering study.

After returning to China, his high-level family contacts allowed him to escape the political turmoil of the Cultural Revolution (1966-76), and to rise quickly through the energy ministry, before becoming premier himself in 1987.

A conservative economic planner thought to retain faith in the old Soviet style of central planning, he was a key player in the Three Gorges Dam project on the Yangtze river -? the world's largest in capacity.

When pro-democracy demonstrations in Tiananmen Square threatened the elite in 1989, he and other hardliners outmanoeuvred dovish officials, with Li afterwards frequently defending the decision to fire on the demonstrators as a "necessary" step.

"Without these measures China would have faced a situation worse than in the former Soviet Union or Eastern Europe," he said on a tour of Austria in 1994 as his international pariah status started to wear off.

Two days before the declaration of martial law, Li met with student leaders, who cut him off and rebuked him for not addressing their demands in a surreal scene broadcast live on television.

But the decision to use force had already been made.

In later years, Li tried to minimise his role in the bloodshed, presenting himself as merely executing decisions made by Deng Xiaoping ?- who died in 1997 ?- and other party elders, according to extracts from a diary published in 2010 and attributed to Li.

But in the "Tiananmen Papers", apparently secret Communist Party documents made public in the US in 2001, Li instead appears to be the instigator of the crackdown, striving to convince Deng to send tanks to the square.

The authenticity of these documents has never been proven, and Communist authorities block discussion of the crackdown.

A father of three, Li saw his family's reputation tarnished in the early 2000s by his son Li Xiaopeng, then president of Huaneng Power International, who was suspected of having enriched himself by buying shares in the firm.

His daughter Li Xiaolin -- who reportedly resigned as vice-president of one of China's state-owned power monopolies in 2018 -- is known for her ostentatiously luxurious taste in dress and was revealed by the Panama Papers to be the sole shareholder in several offshore companies, through which she discreetly controlled firms within China.

Corruption is an enduring issue in China, and was high among the Tiananmen protesters' complaints.

"None of my three children is engaged in official profiteering," Li told demonstrators during their televised meeting, according to a transcript posted online.

They were older than the protesters, he added: "We look at you as if you were our own children, our own flesh and blood."