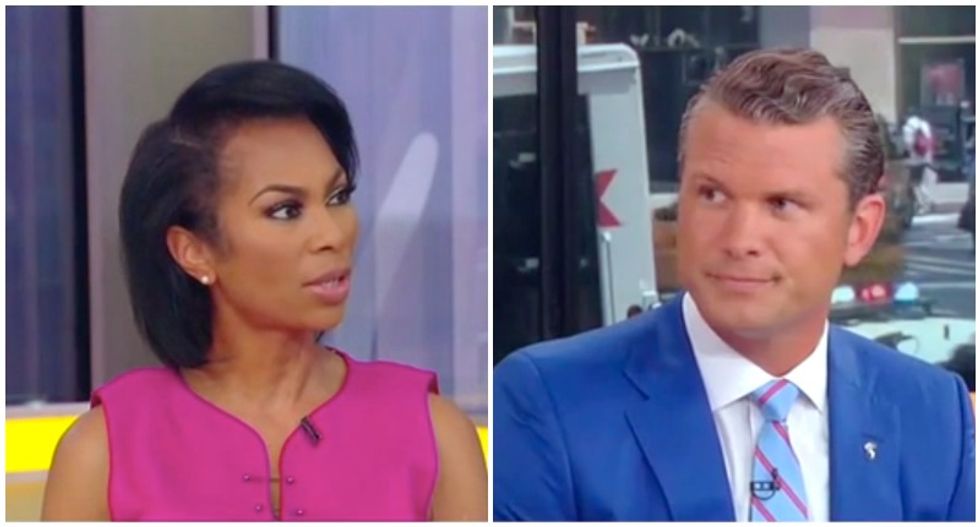 A Fox News host shut down her colleague's defense of President Donald Trump's "love it or leave it" rhetoric.

Pete Hegseth, a "Fox & Friends" host, appeared on the network's "Outnumbered" program to defend the president from charges of racism after he called out four Democratic congresswomen -- all of them women of color -- to return to their home countries.

"He’s a capitalist versus that out-and-out socialist, anti-Semitic comments that they've made," Hegseth claimed. "He wants that foil, and I think where he comes at it from the love of country perspective. It’s not that they just love and cherish the country so much, but they want to make some policy tinkers. It's that they want to change the country completely, they think America is defined by our sins and it’s a bad place."

"He didn’t say, send her back, by the way," Hegseth added. "It’s not just, go back. If this is so bad it, love it or leave it. It’s not that you have to conform or leave it, or be silent or leave it, or be white or Republican or leave it, he is saying your foundation, especially as a member of Congress, is to love and appreciate this exceptional nation, and then make changes to it. As opposed to challenge its very core, which is what I think we get from this group."

Host Harris Faulkner called him out.

"Here's where it gets complicated for me, because I have a dad who served in Vietnam," Faulkner said. "When he left, people who looked like me couldn’t even drink out of the same water fountain, but he loves this country so much, he goes and fights for it and comes back and people are burning flags -- but that's all still an expression of being an American."

"My question is, why can’t we all disagree, even in vehement ways sometimes?" she added. "Not violent, but I think burning a flag is certainly a vehement way. Why can't we accept all of that as part of the nomenclature and conversation, and argue it out. Why do some of us have to be deemed loving it more and hating it more?"

Hegseth insisted he was making the same point, but said the four first-year lawmakers wanted to fundamentally change the United States.

Faulkner then wiped the smile from his face with a short response.

"Unless it's Obamacare for Republicans," she said.