'Get out of my country!' Virginia mom confronts KKK members marching around courthouse 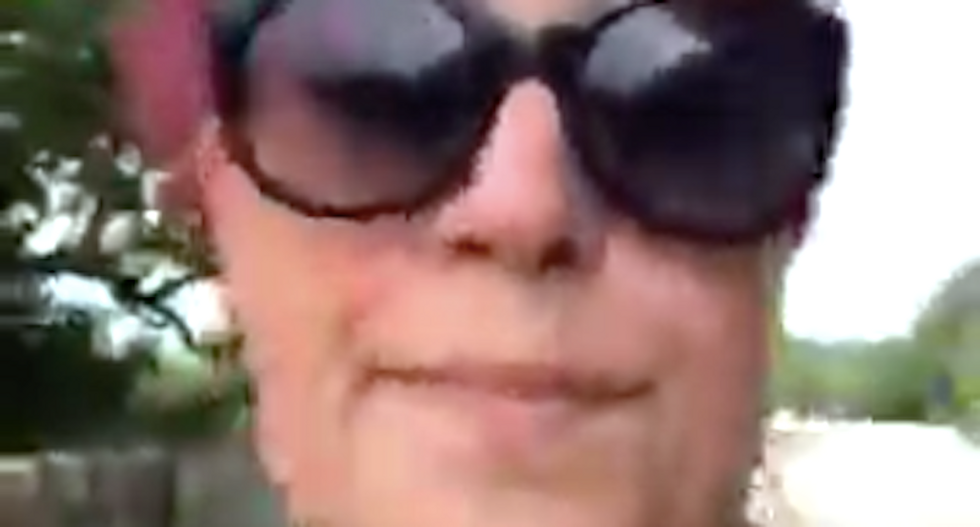 The Hanover County Sheriff's Office said they weren't expecting the robed KKK members Saturday, but said no altercations or traffic disruptions were caused by their hour-long demonstration, reported the Richmond Times-Dispatch.

The event was organized by the Loyal White Knights of the Ku Klux Klan, a Pelham, North Carolina-based group that rallied in Charlottesville, Virginia, a month before the August 2017 United the Right rally where a neo-Nazi killed a counterprotester and injured 30 others.

Law enforcement was caught off guard by the demonstration, but not one local woman, who decided to confront the group.

“I was not surprised at all,” said Shannon Spiggle. “I was grief stricken. It’s just so sad.”

Spiggle told the out-of-state KKK marchers that their hate was not welcome in her community.

“I was just getting so mad, but I was also shaking," the mother of three told WWBT-TV. “I wasn’t exactly sure what I was going to do."

“You’re a disgrace to this country!" she shouted. "Go home! Get out of my country!”

Spiggle said she's the great-great-great granddaughter of America’s first reformed rabbi, and she laughed at the KKK members' response to her criticism.

"They told me to go back to Israel, which I found to be funny because my ancestors came to the Americas in the 1620s," she said. "They helped build this country. My grandfather helped change Judaism.”

Spiggle agreed the hate group had a constitutional right to demonstrate, but she also has a right to push back against their message.

“Where it is their right to demonstrate, they have to deal with the consequences that they’re not welcome, not in my county, not where my children are growing up,” Spiggle said.

Sen. Josh Hawley (R-MO) has proposed a bill that could kill efforts to increase the federal minimum wage to $15/hour.

Axios reported that Hawley's "alternative" plan would provide a refundable tax credit to people making less than $16.50 per hour. Workers would receive 50% of the difference between their weekly pay and the $16.50 threshold. For example, workers making $8 per hour would receive an additional $4.25 in tax credits.

For four years, Donald Trump and his followers mocked Democrats as congenital failures and weepers of "liberal tears." On the 2020 trail, Trump imagined a fistfight he might have with Joe Biden (a famous male weeper), promising his followers that Biden "would go down fast and hard, crying all the way." Madison Cawthorne (R-NC), celebrated winning a Congressional seat last year by tweeting: "Cry more, lib."

It was a ritual in 2020 for Trump supporters to taunt Democrats for crying or, like a bully on a playground, anticipate with delight the tears that would flow from liberal eyes when Trump and his allies scored another victory.

Postmaster General Louis DeJoy will appear before the House Committee on Oversight and Reform on Wednesday for a hearing on the financial footing of the U.S Postal Service.

"The Postal Service's financial condition has been deteriorating over the past decade due to a number of factors, including a decline in first-class mail and the requirement to pre-fund retiree health benefits. The Postal Service needs legislative relief to meet its financial challenges," the committee said in a statement.