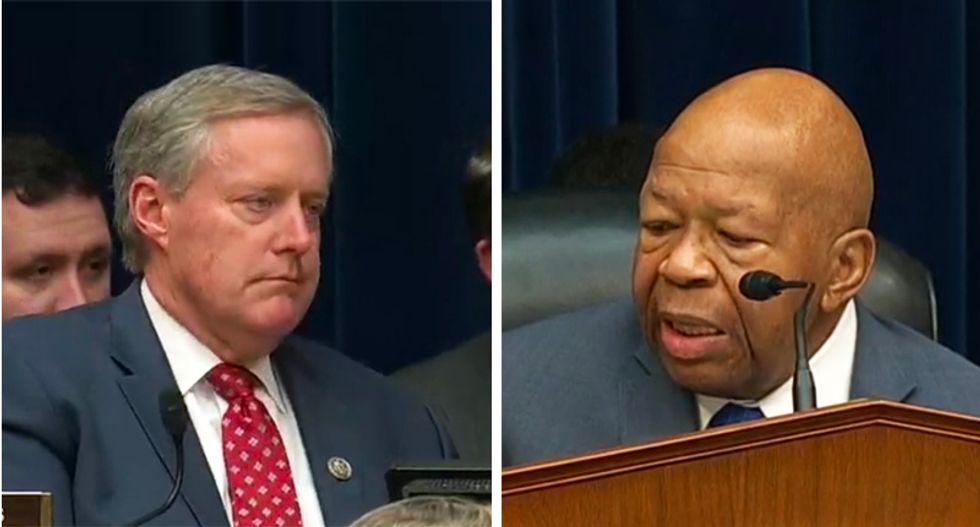 On Monday morning, a CNN panel called out Rep. Mark Meadows (R-NC), who has called Rep. Elijah Cummings (D-MD) one of his best friends, for remaining silent as Donald Trump called Cummings a racist and accused him of corruption.

Showing a clip of Cummings rushing to Meadow's defense during a Michael Cohen hearing after Rep. Rashida Tlaib (D-MI) accused him of racism, "New Day" host Alisyn Camerota slammed the GOP in general, but Meadows in particular.

"So this morning, as the president is personally going after Elijah Cummings and Elijah Cummings who, in February we remember publicly went to bat for Mark Meadows over an implication that Meadows had done something racist," she continued. "Elijah Cummings stood up for him unprompted."

"Mark Meadows has had some time this weekend to step out and say something similar about Elijah Cummings, and nothing ... nothing." Granholm remarked. "Here's what I think every single Republican who was elected and anybody in America has to think about. This president is attempting to divide urban and rural and this is terrible for America."

"We're waiting for Detroit to be the next city on his [Trump's] chopping block because it's majority African-American," she warned. "He's already gone after Chicago and Atlanta. I mean, how often are Republicans going to stand by and say, 'yeah, this is good for America to divide people like this'? I have never seen a nation so divided."

'Frankenstein's Monster': The Supreme Court's next big case can set the stage for more Trump chaos

According to legal analyst Shan Wu, the Supreme Court will hear oral arguments on Wednesday that could lead to a ruling that would create chaos for decades and throw future elections into turmoil on a state-by-state basis.

At issue is Moore v. Harper, which could set the stage for the implementation of the “Independent State Legislature Theory” that would have a wide-ranging impact on federal elections by allowing state legislatures to manipulate voting districts even more than they are doing so now.

Among the Editorial Board’s myriad mandates, as I see them, is bursting dogma, flaying stigma, and otherwise defenestrating ideas that make cohering American politics harder than necessary.

For instance: The United States is one country.