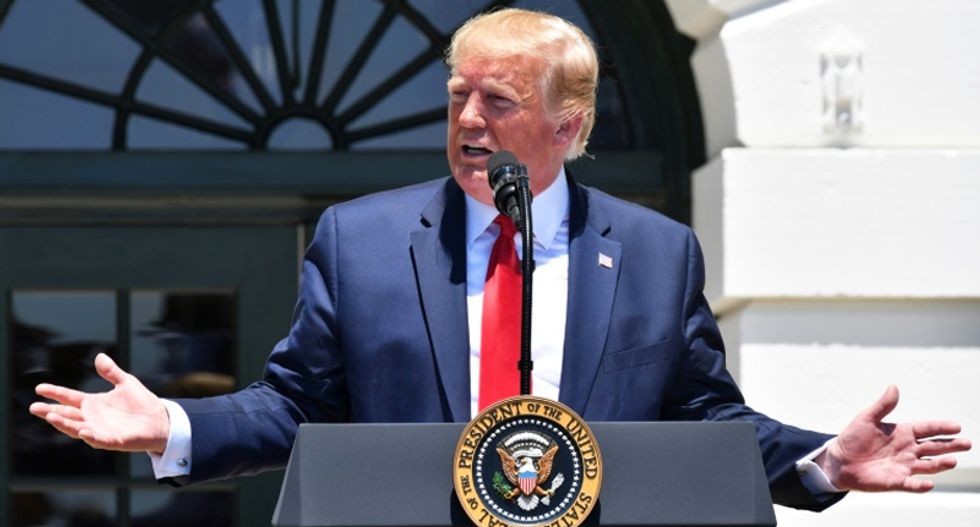 President Donald Trump doubled down on his tweets, accusing a group of progressive congresswomen of hating America. (AFP / Nicholas Kamm)

President Donald Trump reiterated his familiar protectionist and “America first” themes on Monday during his Made in America Showcase, bragging about tariffs imposed on other countries and claiming that under his watch, manufacturing jobs are returning to the United States in a big way. But Trump wasn’t content to merely discuss his economic and trade policies. The president also used the speech and a press conference to defend some Twitter comments that are being widely denounced as racist.

Over the weekend, Trump attacked four congresswomen of color and urged them to go back to the countries they came from. The comments were obviously aimed at Rep. Alexandria Ocasio-Cortez of New York City, Rep. Ayanna Pressley of Massachusetts, Rep. Rashida Tlaib of Michigan and Rep. Ilhan Omar of Minnesota — the liberal/progressive alliance known as The Squad in the U.S. House of Representatives. All of them are U.S. citizens, and the Somali-born Omar is the only one of the four who wasn’t born in the U.S.

Here are some of the wildest moments from the Made in America Showcase.

When a reporter asked Trump if it worried him that “white nationalist groups” are “finding common cause with you” over his attack on The Squad, the president responded, “It doesn’t concern me because many people agree with me. And all I’m saying is, ‘If they want to leave, they can leave.’ It doesn’t say ‘Leave forever.’ It says ‘leave.’”

Trump added, “If they’re not happy with the United States” and “doing nothing but criticizing us all the time,” they should no longer remain in the country.

In response to Trump’s tweets attacking “The Squad,” House Speaker Nancy Pelosi asserted that he’s “trying to make America white again.” And Trump, when asked about Pelosi’s assertion, claimed that the House speaker was the one being racist. Trump told reporters, “That’s a very racist statement. I’m surprised she’d say that.”

Trump, asked if he has concerns that he's using the language of white supremacists and many view his tweets as raci… https://t.co/W4ltpsNltF
— Manu Raju (@Manu Raju)1563210849.0

5. Trump bragged that U.S./Mexico border wall will thrive despite efforts to subvert it

During his speech, Trump complained that the U.S. has protected other countries’ borders while failing to protect its southern border. “We’d fight for the right of other countries to have a strong, powerful border so that nobody could come in,” Trump asserted. “But our border was like a leaking sieve — and that has changed so rapidly and so much.”

Trump continued, “We’re building a wall as we speak even though we have about seven lawsuits trying to stop it.” And he praised the Mexican government, saying, “Mexico has been a great help.”