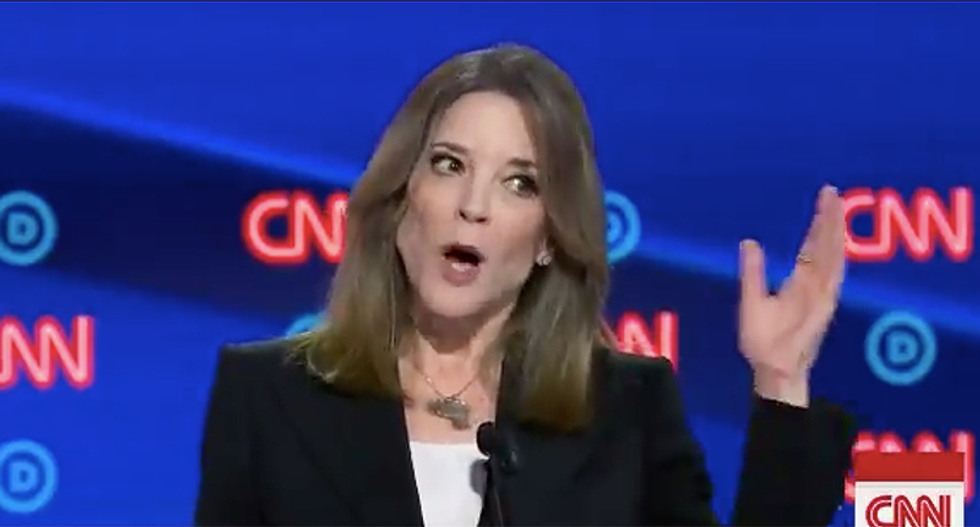 Democratic candidate Marianne Williamson has been the butt of jokes about the political candidates after she said that she would fight President Donald Trump with "love." But her comments on the Tuesday CNN debate stage brought surprisingly sensible comments on issues that seemed to do well with the Detroit, Michigan audience.

Here are five things that she said that were spot on.

"Flint is just the tip of the iceberg," said Marianne Williamson about the water crisis. “We have communities, particularly communities of color and disadvantaged communities, all over this country, who are suffering from environmental injustice”

"If you think any of this wonkiness is going to deal with this dark psychic force of the collectivized hatred that this president is bringing up in this country, then I'm afraid that the Democrats are going to see some very dark days."

She blasted politicians who are willing to take hundreds of thousands of corporate dollars and then turn around and pretend to want to regulate it. She said it's time to start over with people willing to say no to corporations.

“It is time for us to simply realize that this country will not heal — all that a country is a collection of people — people heal when there’s deep truth-telling,” Marianne Williamson said. “We need to recognize when it comes to the economic gap between blacks and whites in America, it does come from a great injustice that has never been dealt with. That great injustice has had to do with the fact that there was 250 years of slavery followed by another hundred years of domestic terrorism.”

I've been mocking Marianne Williamson all night, but her answer on slavery reparations is actually spot on and incr… https://t.co/BPrzjD01yq
— Zack Ford (@Zack Ford) 1564537772.0

Williamson noted that the NRA is the same as pharmaceutical companies, health insurance companies and fossil fuel companies. None of it will change, she said, until a Constitutional Amendment is passed to get money out of politics.

5. For a more moral economic system