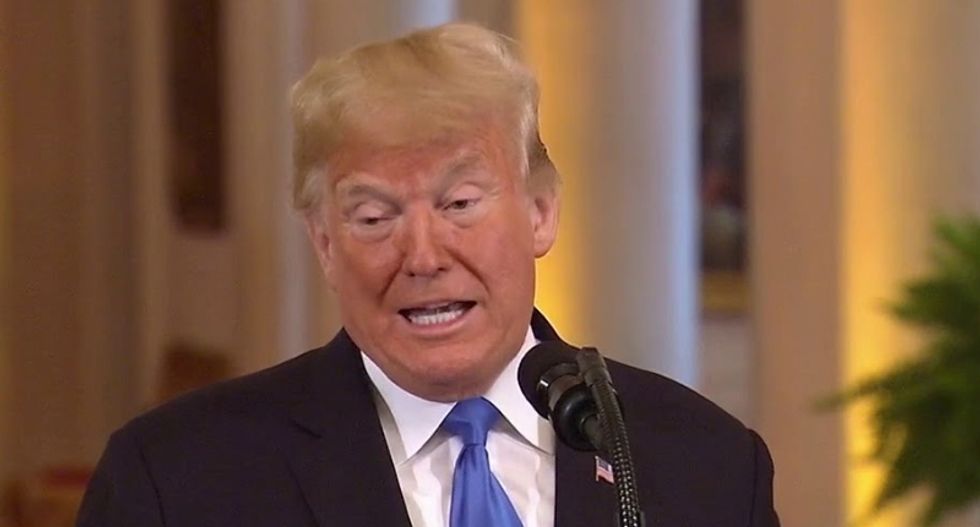 President Donald Trump had what is being called the #TrollSummit with social media influencers.

Surrounded by campaign staff, Trump told the White House audience that he needs their help with the upcoming election or the country will go the way of Venezuela. It's just one of many things that the president rattled off during the summit. In some cases, the president's ignorance about the internet was on full display as he referred to his Twitter accounts as "sites" and claiming that people can't join social media sites.

Here are five other insane comments from Trump.

The crowd had within it several people who invented conspiracy theories. Everyone from GatewayPundit writers to Ali Alexander, the man behind the new birther conspiracy theory about Kamala Harris.

2. "The crap you think of is unbelievable,"

Following up the fact that Trump touted the group as "journalists," he acknowledged that the conspiracy theories they're inventing are "crap" and they're working.

3. "It used to be like a rocket ship when I put out a beauty"

Trump made the comment about how he could tweet something and it would go super viral, but now when he tweets, he hardly gets enough traction. Instead of believing that there's something wrong with what he has to say, Trump is blaming the entire internet. He believes he is entitled to high engagement.

Trump has a tendency to spell things incorrectly on Twitter, including calling his wife Melania, Melanie. And in the words of the president: "covfefe."

5. "We have terrible bias...we have censorship like nobody would believe."

Ironically, Trump said this directly before introducing James O'Keefe, who selectively edits his videos to try and create a false story. He's been caught trying to wiretap a U.S. Senator and trying to get a woman to say that the Washington Post tried to pay her to accuse Roy Moore of sexual molestation.

There were a lot of comments about the First Amendment. As a bonus, here is one of the many false statements.

Actual quote from the president: "To me free speech is not when you see something good and then you purposefully wr… https://t.co/43PtCv53hI
— Brian Stelter (@Brian Stelter)1562879524.0