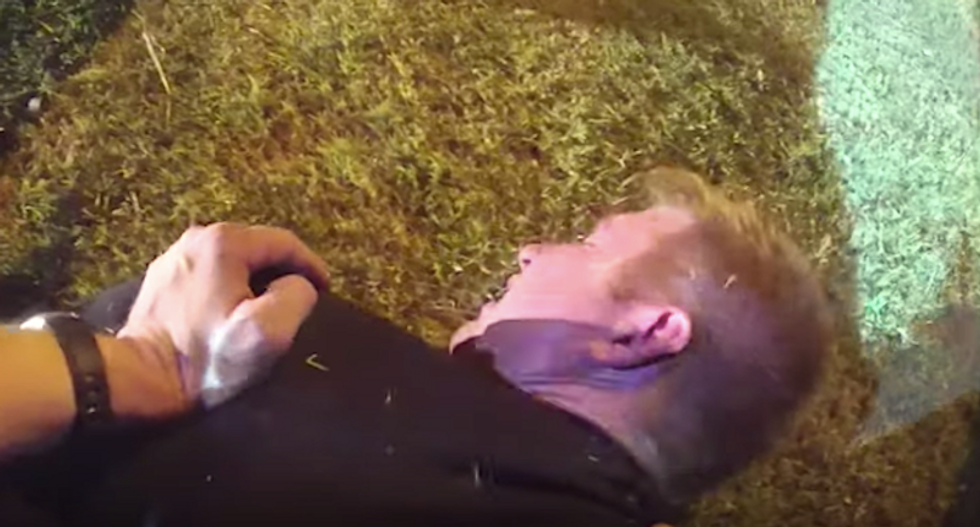 Tony Timpa wailed and begged for help dozens of times as officers pinned his shoulders, knees and neck to the ground outside an adult book store after the 32-year-old called for help while suffering from a mental health episode, reported the Dallas Morning News.

An autopsy later showed Timpa was high on cocaine when he called 911 for help on Aug. 10, 2016, saying he suffered from schizophrenia and depression and had neglected to take his prescription medication.

Body camera video obtained by the newspaper following a lengthy legal battle shows Timpa calling out for help as officers laugh and joke, and then wait at least four minutes to begin CPR after the man became unresponsive.

One of the officers says on the video that Timpa tried to kick him, and police zip-tied his feet and pinned his handcuffed arms behind his back for more than 14 minutes.

"Tony, Tony, what did you take today?" one of the first responders say in the video.

Timpa was face down, with his nose buried in the grass, as officer say they hear him snoring -- when instead, he was struggling for breath.

"Tony, are you still with us?" one officer jokes.

"Tony, time for school," another says.

The first responders can be heard laughing on the body camera video.

Timpa was unresponsive when officers helped place him on a stretcher, and the video shows at least one of them realizes something was wrong.

A paramedic later confirmed Timpa was not breathing, and the video shows officers begin CPR in the back of an ambulance.

Timpa's family has sued three officers for excessive force, saying he should not have been restrained for so long.

"He was not resisting, he was not armed, he was not threatening the officers," said family attorney Geoff Henley. "As a result, his death was an inexcusable tragedy."

Henley said the video, which police have fought to keep unreleased, shows that officers should have realized much sooner that Timpa did not pose a threat.

Two of the officers present during Timpa's death received written reprimands for discourtesy and unprofessionalism.