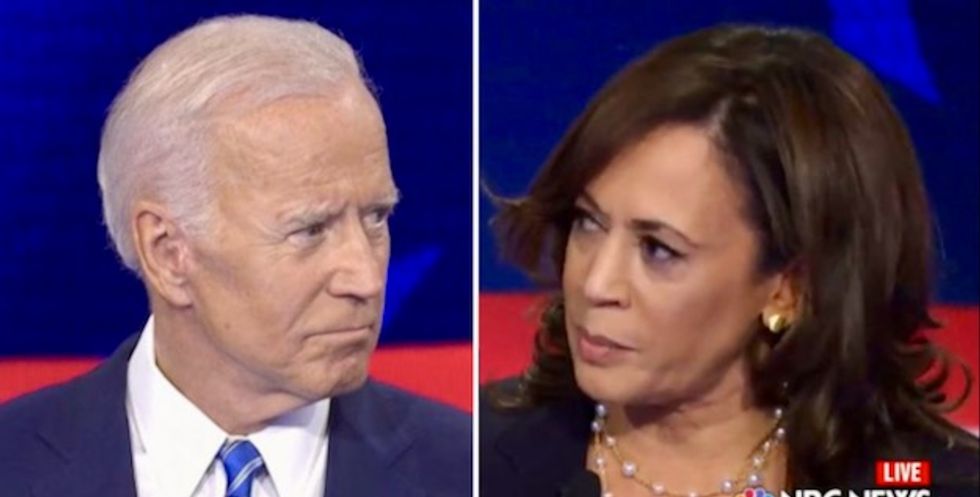 The second round of this series of Democratic debates on Wednesday night is likely to be a bigger draw than the first, because the stage will play host to former Vice President Joe Biden and Sen. Kamala Harris (D-CA). Harris ate into Biden's support after the first debate after a sharp exchange over busing and segregation, and Biden in turn has promised to take the gloves off in the next round.

But, argued Never Trump conservative columnist Jennifer Rubin in the Washington Post, it isn't necessary for Biden and Harris to go after each other this time. In fact, she argued, it might be more productive for them to team up to show the public the bigger threat posed by President Donald Trump.

"Unlike the candidates on Tuesday, it might be wise for both to go after Trump — who's the real radical in wanting to destroy the ACA," wrote Rubin. "If Tuesday's debate could have used more anti-Trump attacks, Biden and Harris likely won’t bypass the chance to go after Republicans' efforts to eviscerate Obamacare. Showing Democratic voters how they will take on Trump is a key part of the audition for the nomination."

Biden and Harris both support dramatic expansions of health coverage, but favor different approaches. Biden's plan would strengthen and stabilize the ACA and add a public option to buy into a Medicare-like plan at any age. Harris' plan goes a bit further, transitioning to a Medicare for All system over a decade but letting private insurance companies continue to sell existing plans if they abide by certain regulations.

"Whatever the details of the plan, the most critical aspect of the debate for Harris will be how confident and precise are her explanations. She’ll need to outline how funding won't mean higher taxes for the middle class and how to accommodate private plans," wrote Rubin. "Biden, by contrast, will need to explain how adding the public option to the Affordable Care Act gets to much the same position as Medicare-for-all with less cost and disruption."

Where the two candidates stand together is in sharp opposition to Trump, who supports a frivolous GOP state lawsuit to wipe out all existing provisions of the ACA. That suit is currently being considered by the Fifth Circuit Court of Appeals and could end up before the Supreme Court.